Don't Jump to Conclusions about the Syrian Chemical Attack 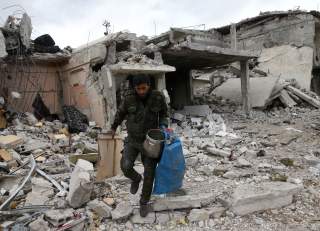 The latest chemical-weapons incident in Syria has triggered new demands for U.S. air and missile strikes against Bashar al-Assad’s forces. President Trump tweeted that “missiles will be coming to Syria,” despite Moscow’s vehement opposition to such raids. It was especially worrisome that Russian military leaders issued an explicit threat to attack U.S. forces if Russian troops were endangered. The possibility of a U.S.-Russia confrontation alone should induce maximum caution on the part of U.S. policymakers. America has no interests at stake in Syria that warrant risking an armed clash with a nuclear power.

Beyond that consideration, and the reality that the president has no constitutional authority without a congressional declaration of war to order a military assault on a country that has not attacked the United States, there are ample reasons to question whether Assad is even the guilty party for the chemical attack. Although assumptions about Assad’s guilt may be true, they are hardly indisputable.

As Trump’s ominous tweet indicated, however, Washington is rushing to judgment again, just as it did with similar atrocities in 2013 and 2017. U.S. officials and the American press simply assume that the Syrian government is responsible. The Trump administration responded to the April 2017 incident by immediately launching cruise missile strikes against the Syrian air base that U.S. intelligence agencies identified as the culprit. Yet, prominent critics, including MIT professor Theodore Postol, a longtime distinguished expert on intelligence issues, raised major questions about the source of the chemical attack—along with doubts about the quality of Washington’s intelligence assessment.

At least some skepticism about the Syrian leader’s guilt in that case was warranted for another reason. Just days earlier, Secretary of State Rex Tillerson and other administration officials stated that Washington would no longer demand that Assad leave office before a peace settlement could be achieved. That was a major change in the U.S. position, and one that Assad’s government had been seeking for years. Having just achieved such a diplomatic breakthrough, it would have been the height of folly for the Damascus government to commit the one act that was most likely to bring about a full-scale U.S. military intervention. It would have been especially counterproductive to create such a provocation, since rebel forces were reeling from a string of military defeats, including the loss of its biggest prize, control over the eastern portion of Syria’s second-largest city, Aleppo.

The timing of the latest incident likewise is puzzling and suspicious. In recent weeks, President Trump had stated on several occasions that he wanted U.S. troops to leave Syria soon. One must ask why Assad would endanger a development that would virtually guarantee his final triumph in the country’s long civil war.

When assessing any incident (or policy), the first question wise investigators ask is “cui bono?”—who benefits? Unfortunately, neither U.S. officials nor most members of the media bother to ask that question. If they did, considerable suspicion would fall on rebel forces for the latest incident as well as the 2013 and 2017 attacks. That increasingly beleaguered faction is facing the growing prospect of total defeat. The Syrian insurgents have every motive in the world to get the United States to escalate its military involvement on their behalf.

It is possible that the Assad regime, in a foolish, self-defeating move, ordered the attacks—or that trigger-happy military commanders did so. A subsequent special UN commission investigation of the April 2017 attack concluded that the Syrian government was responsible, although some independent experts have disputed that conclusion. The UN report also contained another troubling revelation. In a brief passage that many media accounts ignored, the commission concluded that ISIS had used poison gas in a September 2017 assault. With ISIS having a chemical-weapons capability, culpability for the various attacks is muddied further.

The most reasonable conclusion is that the evidence is mixed and inconclusive. Although the Assad government may be the guilty party, the possibility of false-flag operations from ISIS cannot, and should not, be dismissed. Even non-ISIS Sunni forces might have gained access to chemical weapons, perhaps from Syrian government stocks captured during the fighting. Obviously, ISIS obtained such weapons from somewhere, and it is naive to assume that Jabhat Fatah al-Sham (formerly the Nusra Front, Al Qaeda’s Syrian affiliate) or another Islamist faction in the anti-Assad insurgency could not have done so. To view the evidence regarding the chemical attacks—much of which is provided by rebel sources—as definitive virtually invites manipulation by Syrian factions with their own, often unsavory, political agendas. At the very least, U.S. policymakers should exhibit greater caution about assigning responsibility for the chemical attacks.

Above all, participants in the policy debate should cease their smears that anyone who dares even to raise questions about Assad’s guilt regarding such war crimes is a “conspiracy theorist” whose arguments should be dismissed summarily. Fox News host Tucker Carlson is the latest target. America has had far too much of such myopic, intolerant groupthink and neo-McCarthyism regarding foreign policy. It is that kind of mentality that stifled meaningful debate about the disastrous drive to war in Iraq, and we are still paying a dire price. Let’s not repeat that folly in Syria.