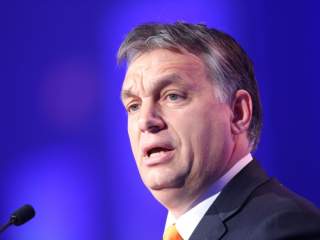 There are alarming signs that some NATO members are spurning the democratic foundations of the alliance. The situation is worst with respect to Turkey. Not only has the government of President Recep Tayyip Erdogan displayed blatant dictatorial tendencies, but Ankara’s foreign policy (including its ongoing flirtation with ISIS) is also a textbook example of duplicity.

But the cancer of authoritarianism within NATO is not confined to Turkey. At least two other members, Hungary and Poland, are also exhibiting worrisome symptoms. Hungarian Prime Minister Viktor Orban has made a reputation as a leader vehemently opposed to immigrants coming into his country. His views are so extreme that critics within the European Union brand them as xenophobic.

But it is Orban’s treatment of domestic political opponents that has set off even louder alarm bells. His government has conducted a crackdown on human rights groups that is not far removed from the behavior of Vladimir Putin’s regime in Russia. Over the past few years, harassment of media outlets, civil organizations and other critics of Orban’s rule has steadily grown. In rhetoric reminiscent of Putin, Orban asserts that such groups are “paid political activists attempting to assert foreign interests in Hungary.” The prime minister now even touts the alleged virtues of autocracy, citing China, Russia, Singapore, and Turkey, as models of successful countries that Hungary should consider emulating.

Budapest’s authoritarian drift, combined with the government’s growing foreign policy flirtation with Russia has alarmed not only officials in other NATO countries but pro-Western elements in Hungary itself. Such concerns were evident in February 2015 when thousands of demonstrators poured into the streets of Budapest to protest Orban’s policies and urge visiting German Chancellor Angela Merkel not to accord his regime any deference.

Matters have only grown more contentious since then. In June, the European Parliament passed a resolution decrying “worrying developments” in Hungary, including the erosion of democratic standards. And just this month the EU Parliament passed another resolution calling on the European Commission to make Hungary the first EU country to face a monitoring procedure regarding its governing practices. Budapest now risks a possible penalty of having its voting rights in EU institutions suspended.

Poland is the latest addition to the roster of NATO countries drifting toward autocracy. The electoral victory of the right-wing Law and Justice Party in October has ushered in a number of troubling developments. The new government promptly pardoned the notorious head of the country’s security services, who had received a prison sentence for various abuses of power. But the most alarming measure occurred when the new government ignored several rulings of Poland’s Constitutional Court. One of the rulings invalidated the government’s attempt to replace five judges with five new appointees. The prime minister and his colleagues defied the court and sat the new justices anyway. It was a brazen maneuver that surpassed U.S. President Franklin D. Roosevelt’s notorious court-packing scheme and would have made even that renowned player of political hardball blush.

The Polish power play has alarmed both domestic critics and EU officials. Some 50,000 people poured into the streets of Warsaw this month to “defend democracy,” and Andrzej Zoll, former president of the Constitutional Court, warned that “twenty-five years of democratic Poland is coming to an end.” European Union Parliament President Martin Schulz described the actions of the Polish government as amounting to a “coup.”

These trends are worrisome, but they should not be all that surprising. The nations of Eastern Europe suffered under the rule of communist regimes for more than four decades after the end of World War II. Democratic roots in those societies, therefore, are both recent and shallow. Indeed, the legacy of authoritarianism is much longer than just the communist era. During the period between the two world wars, only one country in that region, Czechoslovakia, enjoyed a stable democratic system. The other countries were all governed by regimes that ranged from conservative authoritarian to outright fascist. It may have been unduly optimistic to expect all of those nations to make an orderly, unimpeded transition to Western-style democracy.

But U.S. officials need to make a sober examination of the situation. Incurring the risks entailed in defending an assortment of weak allies is questionable enough even when those allies are democratic. But it will be much worse for America to be expected to help defend Putin-style autocracies in NATO’s ranks. Yet that is now a growing possibility with respect to some East European members.

Ted Galen Carpenter, a senior fellow at the Cato Institute and a contributing editor at the National Interest, is the author of ten books and more than 600 articles on international affairs. His most recent book, coauthored with Malou Innocent, is Perilous Partners: The Benefits and Pitfalls of America’s Alliances with Authoritarian Regimes (2015).