Endless War Is No Honor to America's Veterans 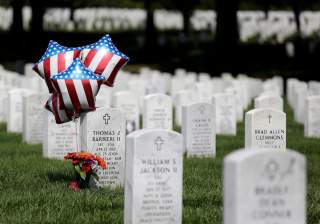 Veterans Day has passed. The annual ritual never changes. Politicians who didn’t serve in the armed services start unnecessary wars, killing military personnel whose sacrifices are then lauded. Officials say these heroes died defending our freedom. That is almost always a lie.

Sometimes Washington must go to war. Not often, however. Despite the endless claims that we live in a dangerous world, America is amazingly safe. No other power could defeat, let alone conquer, the United States. Only Russia has a comparable nuclear arsenal, but it would be destroyed if Moscow targeted America. China and Russia trail U.S. conventional military strength and are more or less strategically isolated. In contrast, Washington is allied with every other major industrialized state.

Despite their bluster, the so-called rogue states, most notably North Korea and Iran, are not planning to attack the United States. Instead, they are desperate to ward off American attack. Since Washington routinely employs regime change against governments on America’s “naughty” list, Kim Jong-un looks rational, not suicidal, in seeking to create a deterrent to preserve his rule.

Washington’s most pressing security challenge is terrorism. But while targeting civilians is a moral outrage, terrorism does not pose an existential threat to America. Indeed, European and Latin American nations have confronted and survived more virulent attacks. Israel, Sri Lanka and Turkey also have suffered prolific terrorist bombings. So, too, Iraq, after Washington invaded that country and triggered sectarian war.

Moreover, interventions, invasions and occupations are no answer to terrorism. On the contrary, terrorism is a poor man’s weapons against stronger powers. It is politics by other means when the other side has a preponderance of traditional military power. To understand terrorism is not to justify it. But it long has been a political tool: two Russian czars, an Austro-Hungarian archduke (heir apparent), two former Indian prime ministers and countless other foreign officials have been assassinated by terrorists. Before Iraq, the most prolific suicide bombers on earth did their killing in Sri Lanka. Countries like Russia are not targeted because they are so liberal; Turkey, Jordan and Kuwait are not attacked for being infidels.

Washington should kill or incapacitate those already determined to kill Americans, but also stop making so many enemies. In Yemen, for instance, the United States is helping the repressive, licentious Saudi royals slaughter people who have never done anything against America. Washington is involved in a civil war in which Riyadh intervened to reinstall a pliant regime. The Yemenis know who is providing the bombs to Saudi Arabia, offering targeting assistance to the Saudi air force and refueling Saudi planes. It should surprise no one if someday a Yemeni commits terrorism against the United States and its people.

Yet the United States is constantly at war, and in far more nations than most Americans realize. Combat in Afghanistan is entering its seventeenth year. U.S. personnel are back in Iraq. They are fighting in Syria, the Philippines and across Africa, including Niger, where four American servicemen recently died. Drone campaigns and special operations forces have been particularly active in Pakistan, Somalia and Yemen. As noted earlier, the United States is also underwriting Saudi Arabia’s aggressive war against Yemen. Worse, Washington is prepared to battle China, Russia and North Korea to defend prosperous and populous allies, which could defend themselves.

Perhaps most striking is how few of America’s “big wars” are justifiable. Most were conflicts of choice undermining rather than sustaining American liberties. The revolution created the nation. But while Washington was justified in defending itself from Great Britain in the War of 1812, the most serious casus belli, an attack on an American warship, took place years before. In 1812, war fever mostly reflected the desire to annex Britain’s Canadian possessions.

The Mexican-American War was an imperialistic bonanza, in which Washington used a dubious territorial claim as an excuse to seize half of its neighbor. Some U.S. officials desired to take the whole nation. The Spanish-American War was equally misguided: Spain brutalized its colony of Cuba, but no worse than Americans treated their native population. Moreover, Washington seized the Philippines as well, even though it had nothing to do with the initial dispute. The United States suppressed an indigenous independence movement with enormous brutality; some two hundred thousand Filipinos died in the process.

World War I was a foolish, unnecessary war. Washington joined with the so-called Entente, which included the anti-Semitic despotism of the Russian Empire, and defended Serbia, whose murderous rulers triggered the conflict by engaging in an act of state terrorism. Aiding them did nothing to “make the world safe for democracy.” Rather, President Woodrow Wilson imagined himself anointed from on high to remake the globe.

Alas, World War II was the inevitable result of Wilson’s folly, the unfinished business from the so-called Great War. World War II is usually considered the “good war,” with clear and evil enemies. But it likely would not have occurred had the United States not previously unbalanced the European balance of power and promoted an unsustainable “settlement,” which broke down almost immediately.

In the Korean War, Washington had little choice but to intervene, having helped set up the conflict; the Cold War context made the heretofore irrelevant peninsula important to U.S. security. But not Vietnam. Washington took over from the French colonial empire and fought an extended war in an area of no great geopolitical significance to America. The conflict’s end demonstrated that the battle was unnecessary. The dominoes ultimately fell, but stopped with Laos and Cambodia. A decade later, Vietnam was seeking to improve relations with America as a counterweight to China, with which it fought a short war.

Ronald Reagan used the military sparingly. His intervention in Lebanon’s civil war was folly, which he recognized after the attacks on the U.S. embassy and Marine Corps barracks. Grenada provided attractive visuals of American medical students arriving home, but mattered little for U.S. security.

Most of Washington’s “little wars” after the Cold War did not make America safer. Ousting Panama’s Manuel Noriega, forcing out the Haitian military junta, intervening in the Bosnian civil war, dismantling Serbia and tracking down warlords in Somalia were essentially international social work. At least the first Gulf War was limited in scope and effect, though Washington’s previous support for Saddam Hussein’s dictatorship, most notably his war of aggression against Iran, likely confused him about America’s intentions.

George W. Bush’s invasion of Iraq was catastrophically foolhardy, spreading sectarian war, victimizing religious minorities, expanding Iran’s influence and setting loose vicious Islamist forces, which morphed into the Islamic State. Presidents Bush, Obama and Trump each took a mission that started as destroying the terrorist group that attacked Americans at home and turned it into an interminable nation-building mission that has become a black hole for U.S. lives and resources. President Obama initiated his own war in Libya, which he refused to call by that name. The resulting violent overflow inflamed conflict in neighboring countries such as Chad and Niger.

Why this enthusiasm, even addiction to war? The dominance of U.S. foreign policy by elites ever ready to sacrifice their countrymen’s lives is one factor. Indeed, the bipartisan commitment to intervene survived President Trump, who had criticized Hillary Clinton’s proclivity for war, said the United States should not have invaded Iraq, blasted subsidies for wealthy allies, called Afghanistan “a total and complete disaster” and more. In practice, little has changed. More troops have gone to Afghanistan, Iraq and Syria on this president’s watch. The blank check for Saudi Arabia has gotten bigger. He is threatening war against North Korea.

Congress’s de facto abandonment of its power to declare war is another factor. America’s founders consciously sought to ensure that no one man could let slip the dogs of war. But legislators prefer not to take on the responsibility. Let presidents do the dirty work, and members of Congress can applaud or carp, depending on the result. There is little popular accountability for presidents, at least until body bags start coming home. Even then, attempts to hold executive officials accountable for their bad decisions are drowned out by demands to “support the troops,” which really means insulating warmongering politicians from responsibility.

U.S. military power makes intervention easy. No country, especially the small, Third World states that usually end up in Washington’s crosshairs, can resist America’s armed forces. For a president able to unilaterally deploy the military, the world is a target-rich environment. As then Secretary of State Madeleine Albright said to Joint Chiefs of Staff chairman Colin Powell: “What’s the use of this great military you keep talking about if we never use it?”

Policymakers are increasingly unlikely to have served in the military or have family members or friends who do so. The problem is not the volunteer military, but an armed forces that is relatively small compared to the population. Inevitably, fewer people will serve in the military. Even with conscription, few children of elites would be forced into the service, and an even smaller proportion would serve in combat arms. Politicians disconnected from the realities of war are more likely to view the military as the answer to just about every geopolitical problem.