Essay Contest: How Can America Benefit from a More Restrained Foreign Policy? 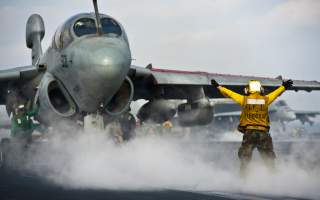 The National Interest (TNI) and the John Quincy Adams Society (JQA) are excited to announce a new collegiate essay contest on U.S. foreign policy. Undergraduate, graduate, and doctoral students who will be attending institutions in the United States in the Fall 2017 semester are welcome to participate.

The winning essays will run on TNI’s website and be promoted on social media by both TNI and JQA.

Prizes are as follows:

Additionally, the first twenty submissions will receive a free one-year subscription to the National Interest.

Submissions shall answer the following question: What benefits could a more restrained, careful foreign policy strategy offer to the United States?

Submissions shall be between 1000 and 1500 words, and are due by 11:59pm Eastern Time on Sunday, June 18, 2017, by following the instructions at this link. Sources should be hyperlinked, rather than footnoted, when possible. Complete rules follow:

***VOID IN MARYLAND, NEBRASKA, ARIZONA AND WHEREVER PROHIBITED

1. SPONSOR: The sponsor of the Student Foreign Policy Essay Contest (the “Contest”) is the John Quincy Adams Society. (the “Sponsor”).

2. ELIGIBILITY: Contest entrants must be legal residents of the fifty (50) United States and the District of Columbia aged 18 years or older, except where void, in Maryland, Colorado, Nebraska, Arizona, and wherever else prohibited. Employees, officers, and directors of the Sponsor, and its subsidiaries, affiliates, and divisions (“Related Entities”) and their immediate families (parents, children, siblings and their spouses) and household members (whether or not related) of each are not eligible to enter. Anyone serving as a contest judge is ineligible for the Contest. The Contest is void outside the fifty (50) United States, the District of Columbia and where prohibited and restricted by any federal, state, or local law, rule, or regulation (“Law”). The Contest is subject to all Law.

• Before the end of the Contest Period, go to the Contest entry page at this link, and submit an essay between 1000 and 1500 words in length on the topic of “the benefits of a more restrained, careful foreign policy for the United States.”

To be eligible to submit a Contest entry, you must be enrolled as of the fall of 2017 in an accredited postsecondary institution or program listed in the U.S. Department of Education’s most recent database (http://ope.ed.gov/accreditation/GetDownLoadFile.aspx). No person may submit more than one Contest entry. Attempting to submit multiple Contest entries will result in your disqualification from the Contest. Your participation in the Contest is optional and at your sole and absolute discretion.

4. PROHIBITED CONTENT: By entering the Contest you agree not to create or submit a Contest entry that:

• Infringes on any patent, trademark, trade secret, copyright, or other proprietary or property rights of any party;

• May be deemed, within the meaning of Law, to be electioneering communications, intervention in a political or electoral campaign, or lobbying;

• Harms minors in any way; or

The Sponsor reserves the right to disqualify any and all Contest entries that violate the above conditions, or for any other reason at any time without prior notice.

5. JUDGING AND SELECTION OF PRIZE WINNERS: All contest entries will be judged based on the following criteria:

6. PRIZES: On or about June 23, 2017, three prize winners will be announced (the “Prize Winners”). The Prize Winners shall receive the following (the “Prize(s)”):

All Prizes will be paid in United States Dollars. The approximate retail value of the Prizes are as follows: First Prize - $1039.95; Runner Up - $279.95. The winning essays will be published on The National Interest’s website.

7. PRIZE RESTRICTIONS: The specifics of all elements of the Prizes stated in these Contest rules shall be determined by Sponsor in its sole and absolute discretion. If an alternate prize is substituted and awarded: any portion of the alternate prize not used by any Prize Winner is forfeited and no substitute will be offered or permitted; all elements of the Prize being offered are: (a) provided “as is” with no warranty or guarantee either express or implied by Sponsor; (b) without warranty other than that offered by servicers or as required by Law; (c) provided without making the Sponsor responsible or liable for any warranty, representation, or guarantee, express or implied, in fact or in law, relative to the Prize, including but not limited to their quality or fitness for a particular purpose; and (d) if applicable, not transferable or redeemable for cash and may not be extended, transferred or substituted, except that the Sponsor may substitute a prize of equal or greater value when necessary (not to exceed $539.95 for the First Prize or $279.95 for the Runner Up), as determined in its sole and absolute discretion (any such changes will be announced at the sole and absolute discretion of the Sponsor). Each Prize Winner assumes sole responsibility for all costs associated with any elements of the Prize not explicitly included as part of the Prize, including without limitation, all federal, state and local taxes (if any), fees, surcharges, or other expenses. Other restrictions may apply. In compliance with United States Internal Revenue Service regulations, the Sponsor will send a Form 1099-MISC to any Prize Winner, which requires disclosure to the Sponsor of the Prize Winner’s Social Security number. Prize Winners remain solely responsible for paying all federal and other taxes in accordance with Laws that apply in the Prize Winner’s state of residence.

9. OWNERSHIP OF YOUR CONTEST ENTRY: By submitting your Contest entry you hereby relinquish, grant, transfer, assign, and deliver to the Sponsor all right, title, and interest of every kind and nature whatsoever that you have in the essay you write as part of your Contest entry, including the copyright and all other intellectual property rights thereto. As a condition of receiving your prize, you may be required to execute additional documentation such as copyright assignments to sponsor of your Contest Essay. In addition, you hereby irrevocably assign to the Sponsor all causes of action, including accrued, existing, and future causes of action, arising out of or related to the rights, including copyrights, in and to the essay you write as part of your Contest entry.

10. DISPUTES: By participating, entrants release Sponsor and its parent companies, affiliates, subsidiaries, and their members, directors, officers, employees, and agents from any and all liability with respect to all aspects of the Contest including all losses, damage or bodily injury resulting from participation in this Contest, and the possession, acceptance, or misuse of prizes. By entering the Contest, you agree that (a) any and all disputes, claims, and causes of action arising out of or connected to the Contest or the Prize, shall be resolved individually, without resort to any form of class action; (b) any and all claims, judgments and awards shall be limited to actual out-of-pocket costs incurred, including costs associated with entering the Contest but in no event attorneys’ fees; and (c) under no circumstances will any entrant be permitted to obtain any award for, and you hereby waive all rights to, any claim; punitive, incidental, or consequential damages; and any and all rights to have damages multiplied or otherwise increased and any other damages, other than for actual out-of-pocket expenses.  All issues and questions concerning the construction, validity, interpretation, and enforceability of these Contest rules, or the rights and obligations of the entrants and Sponsor in connection with the Contest, shall be governed by and construed in accordance with the laws of Virginia without giving effect to any choice of law or conflict of law rules or provisions that would cause the application of the laws of any jurisdiction other than the Commonwealth of Virginia. Any legal proceedings arising out of this Contest or relating to these Contest rules shall be instituted only in the federal courts located in the Eastern District of Virginia, and the parties consent to jurisdiction therein with respect to any legal proceedings or disputes of whatever nature arising under or relating to these Contest rules. The invalidity or unenforceability of any provision of these Contest rules shall not affect the validity or enforceability of any other provision. In the event that any provision is determined to be invalid or otherwise unenforceable or illegal, these Contest rules shall otherwise remain in effect and be construed in accordance with their terms as if the invalid or illegal provision were not contained in these Contest rules.

11. INTERNET: If for any reason this Contest is not capable of running as planned due to an infection by a computer virus, bugs, tampering, unauthorized intervention, fraud, technical failures, or any other causes beyond the control of the Sponsor that corrupt or affect the administration, security, fairness, integrity, or proper conduct of this Contest, the Sponsor reserves the right at its sole and absolute discretion to cancel, terminate, modify, or suspend the Contest. The Sponsor assumes no responsibility for any error, omission, interruption, deletion, defect, delay in operation or transmission, communications line failure, or theft, destruction, or unauthorized access to or alteration of entries. The Sponsor is not responsible for any problems or technical malfunctions of any telephone network or telephone lines, computer online systems, servers, or providers, computer equipment, software, failure of any email or entry to be received by the Sponsor due to technical problems, human error or traffic congestion on the internet or at any website, or any combination thereof, including any injury or damage to your or any other person’s computer relating to or resulting from participating in this Contest or downloading any materials in this Contest. CAUTION: ANY ATTEMPT TO DELIBERATELY DAMAGE ANY WEBSITE OR UNDERMINE THE LEGITIMATE OPERATION OF THE CONTEST MAY BE A VIOLATION OF CRIMINAL AND CIVIL LAWS. SHOULD SUCH AN ATTEMPT BE MADE, THE SPONSOR RESERVES THE RIGHT TO SEEK DAMAGES OR OTHER REMEDIES FROM ANY SUCH PERSON(S) RESPONSIBLE FOR THE ATTEMPT TO THE FULLEST EXTENT PERMITTED BY LAW. Uses of automated devices are not valid for entry.

12. USE OF INFORMATION: The information that you provide in connection with the Contest may be used by Sponsor to inform you about related opportunities and developments involving charitable or educational topics that the Sponsor thinks may be of interest to you. Sponsor may also share the information you provide in connection with the Contest with its subsidiaries, affiliates, divisions, and third parties in order to advance charitable or educational goals, and as otherwise stated in the Sponsor’s terms of use and privacy statement.

13.GENERAL: By entering this Contest or accepting the Prize, you (a) agree to be bound by the Sponsor’s policies, these Contest rules, and the decisions of Sponsor which are final and binding in all respects; and (b) consent to the use of your name, voice, picture, and likeness for charitable, educational, advertising, and promotional purposes in any medium throughout the world in perpetuity without additional compensation unless prohibited by Law.  The Sponsor reserves the right to correct typographical, clerical, or printing errors in any Contest materials.  The Sponsor reserves the right to prohibit any person from participating in the Contest if, at its sole and absolute discretion, the Sponsor finds such person to be tampering with the entry process or the operation of the Contest, or if such participant repeatedly shows a disregard for or attempts to circumvent these Contest rules, or acts: (x) in a manner the Sponsor determines to be not fair or equitable; (y) with an intent to annoy, threaten, or harass any other entrant, the Sponsor, or related entities; or (z) in any other disruptive manner.  The Sponsor reserves the right to cancel, terminate, modify, or suspend the Contest at its sole and absolute discretion.

14. WINNERS’ LIST/CONTEST RULES: To request an official Prize Winners list or a copy of these Contest rules, both available through September 1, 2017, send an email to [email protected].