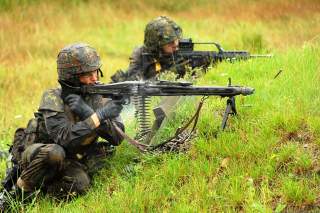 If candidate Donald Trump had one signature position, it was criticizing America’s populous, prosperous allies for leeching off the U.S. military. He even talked about charging them for the Pentagon’s services.

But like many other issues, he proved to be more bark than bite. Whether reflecting a lack of belief or attention, he left European policy to his Europhile officials, who told European leaders to ignore the president. “There is a lot more support for continuing our past policies than it might appear from some of the statements” of the president, observed Sen. Jeanne Shaheen (D-NH): “The unanimity comes from those folks who are actually operationalizing policy.”

Although the president still caused a scene when he visited Europe—shoving the Montenegrin prime minister aside and failing to proclaim his support for NATO’s Article 5—he did nothing practical to reduce the defense dependence of America’s allies. He later deluded himself in claiming that “money is pouring in,” but his officials have been pleading for the Europeans to do more, just like members of most every administration dating back to the formation of the transatlantic alliance have done.

Last week Defense Secretary Jim Mattis was in Europe to lobby the nations America is subsidizing, always a thankless task. Having pushed a National Security Strategy which pointed to Russia as a supposed serious security threat, he was desperate for the Europeans—who are a good deal closer to Moscow—to act like they shared the administration’s fears.

They obviously don’t. The Europeans are spending a bit more recently, but the increase looks impressive only compared to how much and long military outlays fell in recent years. New figures from the International Institute for Strategic Studies noted that European military outlays last year—three years after Russia detached Crimea from Ukraine—were still lower than in 2010. Just three of NATO’s members, patsy America, geopolitical midget Estonia, and economically decrepit Greece, which is worried far more about Turkey than Moscow, made the official 2 percent of GDP standard for military outlays.

Depending on how the year goes, the United Kingdom, traditionally possessing the continent’s most robust military, minor leaguers Latvia and Lithuania, marginal Romania, and nationalistic Poland may hit that level next year. Missing from the list are the other major European powers: Germany, France, Italy and Spain.

Embarrassed NATO officials argue that members are doing better and, anyway, fifteen countries have plans to hit 2 percent by 2024. However, most countries are as likely to fulfill their pledges as European members in the past, when they routinely promised Washington to do more to deter the Soviet Army, and then spent the money on their welfare states, again.

Particularly outrageous is the case of Germany. Last year the federal republic hit a dismal 1.22 percent of GDP. Alas, admitted Hans-Peter Bartels, parliamentary commissioner for the armed forces: “The hard currency, in which the success of the minister is measured, is the readiness of the Bundeswehr. And that has not really improved in the last four years, but rather has become worse.” Stories abound of helicopters grounded for repair, submarines unavailable for action and tanks needing repair or overhaul. Small detachments could be sent for missions, but, said Bartels, “the Bundeswehr as a whole cannot currently be used in the collective defense,” such as defending Europe from Russia.

Chancellor Angela Merkel promised to reach 2 percent of GDP by 2024, but no one believed Berlin was going to almost double defense outlays. In fact, the number is falling this year to 1.13 percent. Although her party reiterated its support for the 2 percent objective in last year’s election, her Social Democratic partners in the so-called Grand Coalition attacked the pledge as “crazy” and impossible to fulfill. The parties’ coalition agreement provides a draft budget of 1.15 percent of GDP in 2021. Berlin plans to leave the defending to Washington. As do most of NATO’s other members.

Not that reality influences alliance Secretary-General Jens Stoltenberg, who said the rest of NATO’s members are supposed to submit plans for reaching 2 percent of GDP by 2024. No doubt, they will. And equally certain, they will flout those plans. “My message is to do more,” said Stoltenberg: “We all have to do more.”

Actually, the Europeans don’t have to do more, which is precisely the problem.

They obviously could do so. Germany’s GDP is more than twice as large as Russia’s. France, Italy and Canada also have larger economies. Collectively Europe has about eleven times Russia’s GDP. Using purchasing power parity as the measure rather than exchange rates closes the economic gap some, but Germany still outranges Russia and Europe remains far ahead.

Several European nations have economic problems, of course. However, European leaders have been complaining that recent increased growth makes it harder for them to meet the 2 percent standard. Apparently it doesn’t occur to them that greater wealth enables them to, well, spend more.

Anyway, Russia’s economic difficulties are greater still, with the economy disproportionately based on natural resources, distorted by state manipulation, and burdened by sanctions. In the long-term America may be worst of all. Although the Europeans have racked up higher official debt, Washington has far more unfunded liabilities, an astounding $210 trillion, 10.5 times America’ national debt and GDP, according to the calculation of economist Laurence Kotlikoff. Washington can continue to underwrite a growing elderly population, fund an inefficient health care system, and subsidize the defense of wealthy allies for only so long before financial collapse impends.

The reason the Europeans don’t spend more on their militaries is because they don’t have to. First, they really don’t fear for their security. A Russian attempt to conquer Europe is about as likely as a Martian invasion or zombie apocalypse. Vladimir Putin is a nasty character, but demonstrates neither ideological animus toward America and Europe nor megalomaniacal fantasies about continental or global domination. Russia would lose any full-scale war, and grabbing a small country along its border, one of the Baltic States, perhaps, would yield no meaningful benefit. Start a war, suffer needless casualties, risk nuclear annihilation, and guarantee economic and political isolation in order to rule over what remains after military battles, physical destruction, capital flight, and fleeing refugees. Great plan.

Of course, the Baltic as well as Polish governments berate their fellow Europeans for lax military efforts. Polish Prime Minister Mateusz Morawiecki complained that “if we want to be more self-reliant and self-sufficient, we really have to cater for our security in a much better way.” He criticized NATO members that fell short of the 2 percent standard of being “free riders who live under Pax Americana but pretend to be self-sufficient in the context of security.” He is right but why should they behave any differently, since they don’t share his fear of Russian aggression?

Second, the Europeans do live under “Pax Americana.” Thus, they believe Washington will save them if there’s a problem. And that now is President Trump’s fault.

There was a brief moment after his election when European leaders were worried. In fact, there was a strong European presence at the Democratic Party convention, where those concerned about the survival of America’s defense dole received assurances that all would be well under President Hillary Clinton. Thus, Donald Trump’s election came as an especially horrid shock to them. Had the president followed up his election victory with a commitment to reduce America’s subsidies for nations well able to defend themselves—and acted on that promise—the Europeans would have been forced to decide how concerned they were about their security and what they were prepared to do to safeguard it.

But they quickly realized that he was, in Mao-speak, a paper tiger. Secretaries Mattis and Rex Tillerson indicated that Washington remained as committed as ever to NATO. The president occasionally fulminated but did nothing to turn those sentiments into policy. The Europeans talked big about doing more, as they often had done in the past, and then backed away as the lights faded. And that isn’t going to change, no matter how much Secretary Mattis urges, insists, demands, and maybe even whines. As long as the United States continues to spend more, even upping its outlays specifically targeted for Europe’s defense, the Europeans can safely spend less.

Ultimately, the Europeans should decide what they need to spend to protect their nations and continent. It isn’t up to Washington to dictate. But the United States should stop underwriting their defense. American support was necessary at the conclusion of World War II. However, Europe’s dependence long ago outlasted the continent’s economic and political weakness. If European states today are vulnerable to outside attack or coercion, it is their own fault. Washington should let its NATO allies know that starting today, they will be responsible for their own futures, and the consequences of failing to act will become theirs, and theirs alone.