Everything We Don't Know about the Terror Attack in Manchester 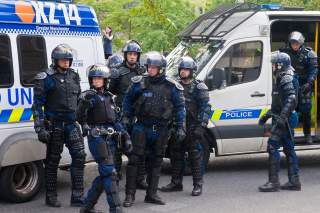 There are still plenty of questions that remain unanswered about last night’s horrific suicide bombing at a concert in Manchester last night. Was this yet another case of a single individual who watched too many ISIS videos and eventually became self-radicalized? Or did the bomber have logistical and bomb-making support in the Manchester area? How was the bomber able to get so close to the arena without arising suspicion? Was the Islamic State in any involved, or is the group merely claiming responsibility for the attack as a way to persuade its followers and sympathizers that it remains strong enough to inflict damage in the west?

The British security services are scrambling for answers as we speak. Over the coming days and weeks, we’re likely to hear about police raids in Manchester neighborhoods and persons of interest being taken into custody for interrogation. Even then, even some of the questions that inevitably arise after a major terrorist attack on Western soil may still be left unanswered.

But if there is anything abundantly clear from last night’s bombing in Manchester, it’s that preventing an act of terrorism on a soft target like a music venue or a sports stadium is enormously difficult—if not impossible—if the intelligence services aren’t able to acquire the information to stop the attack from happening in the first place. It’s a point made on countless occasions, but it’s one worth repeating: as good as the intelligence services and police departments in the United States and western Europe are, they aren’t perfect. You can be one of the most proficient intelligence analysts in the world and still be unaware of plots that are in progress. In the future, attacks will continue to be carried out and innocent people will be killed—not because the intelligence analysts and police officers are incompetent, but rather because preempting every single individual from strapping a suicide vest around his body or stuffing an explosive device into a backpack is physically impossible.

There is a reason why terrorists attack targets like concert halls, sports stadiums, restaurants and museums: they are the perfect targets of opportunity, with very little police presence and a whole lot of civilians jammed into the venue. The Bataclan theater in France, the metro station in Brussels, a parade in Nice, a Christmas market in Germany, an office complex in San Bernardino and a concert hall in Manchester all have one thing in common: their vulnerability and high body count. Unless France, Britain, Belgium and the United States are willing to hire millions of additional police officers to patrol every nook and cranny of society, terrorists will continue to find weak spots in the armor.

Attacking a concert full of young girls and teenagers is the definition of cowardice That’s exactly what happened in Manchester last night. Unfortunately, terrorism is becoming a sad fact of life for Western societies.