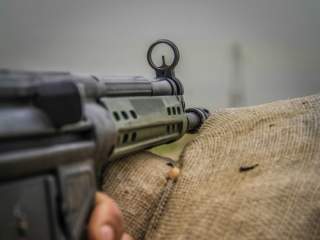 I have written many times in this space on the evolving situation in Iraq regarding the fight against the Islamic State (ISIS). In large part my analysis pieces have been based on the experience gained through my two-plus decades of military service, including four combat deployments (two of which were in Iraq). But for this contemporary situation I have been reliant on reports by journalists on the ground. In the early March, I traveled to Iraq to find out first-hand what the conditions were like in and around the site of the next big fight: the battle for Mosul.

While there I visited four refugee camps, interviewed considerable numbers of displaced persons, met with the commanding general of the Peshmerga in command of troops opposite Mosul, talked with some of his troops, and met with aid workers and journalists from the region. It was an eye-opening visit to say the least.

In the refugee camps I met with Yazidis, Muslims, and Christians; men, women, teenagers and young children. Two main things stood out during these interviews. First was that even some devout Sunni Muslims I met were angry at ISIS and were adamant in saying the radicals were not genuine followers of Islam but had perverted it for their own ideological agenda; two Sunni Muslims I visited had renounced their faith.

The second thing that stood out from my conversations with displaced persons is that especially among the Christians that had been driven out of Mosul and its environs, there was no hatred or a desire for revenge. “That’s not what our faith teaches,” one man told me. “We must pray for them. Jesus forgave even those people who killed him on the cross.” When I asked him why he wasn’t angry at ISIS, he quickly corrected me. “They should be held accountable for their actions—they drove us from our homes—and we want to get our lives back.” But he said it was up to God, not them, to seek revenge. I have nothing but the highest regard for their strength of character.

There was one other reason for optimism I observed. As is well known, the Iraqi Army dissolved before ISIS in the summer of 2014 and their ability to defeat the Islamic radicals and retake lost territory—especially Mosul—is uncertain. The Peshmerga, however, appear to be cut from a different cloth. I met with the commanding general of the Peshmerga forces opposite Mosul, General Bahram Yassin. I came away very impressed with his understanding of the military, political, and cultural issues complicating the fight against ISIS, as well as his grasp of the tactical tasks necessary to defeat ISIS in Mosul.

I was pleasantly surprised at the general’s willingness to discuss—frankly and on the record—the difficulties and challenges facing his mission (I will write more on this conversation in the coming days). After our interview, he took me to meet some of his troops manning the forward fighting positions opposite the ISIS forward defensive positions. There I met a Kurdish fighting man who was adamant in his contention that ISIS fighters were not as fearsome as the media makes them out to be—and how eager he was to fight them. I even met an American volunteer from Idaho at that forward position. He was a former US Army soldier and had traveled at his own expense to provide his services as a combat medic.

How this battle and war plays out is far from certain at this point. But one thing was deeply engrained on me during this visit. The human cost of this war has already been profound, the destruction breathtaking, and the scale of psychological and emotional wounds suffered by the survivors difficult to imagine. Perhaps it wasn’t surprising that virtually everyone I spoke with—man, woman, child, Christian, Muslim, Yazidi—all wanted the same thing: a chance to live without the threat of death hanging over their heads every day. 23-year-old Alen al-Kasmousce, a Christian living in a refugee camp in Erbil, summed it up best.

I asked him what he hoped to accomplish in his future. Get a master’s degree? Become an engineer or businessman? Have a family? He calmly responded, “No, my generation doesn’t even think about those things. What we all dream about is just living life without war.” Once the conflict was over, Alen continued, he could consider a family and career. Without peace, however, he dares not dream and deals with surviving one day to another. 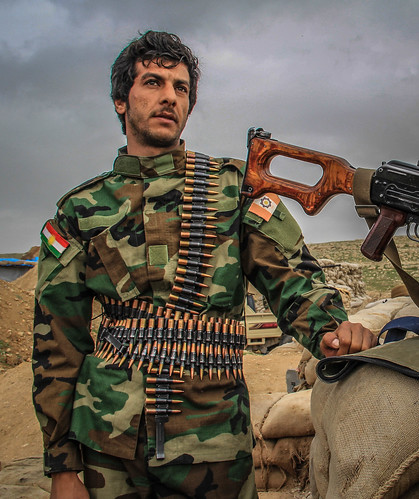 1. What the locals in Erbil called a “vertical village” refugee camp. Because the regional economy tanked in 2014 owing to the twin maladies of the ISIS attack and the collapsing of the global oil market, the city of Erbil is littered with high-rise buildings frozen in various degrees of completion, mere shells. Refugees have been given permission in some of them, like the one pictured here, to build make-shift rooms on several of the unfinished floors in which to live. Whole families live in each of these single rooms.

2. The laundry area in the “vertical village.”

3. A luxury: a functioning, rapidly built community toilet. There are no private facilities of any sort. No kitchen, restroom, showers, or laundry.

4. Rows of pre-fab buildings and tents comprising a primarily Yazidi camp erected in the countryside not far from Mosul.

6. A young Yazidi father wonders what the future will hold for his son.

7. A Yazidi woman and her baby. One of the women I met at this camp was still grieving because three of her daughters—ages 10, 11 and 13—were taken from her home by ISIS to serve as sex slaves. She has not heard from them since she escaped in 2014.

8. This elderly Yazidi seemed traumatized when I met him.

9. ISIS is brutal to everyone. Even these Muslim women were driven from their homes by the Islamic radicals.

10-13. The children at every camp I visited seemed to fall into two categories. Some were deeply suspicious of any stranger and seemed afraid of me. But most were oblivious to the war and their lives as displaced persons. They were like kids everywhere: wanted to play, be silly, and enjoy life. Even in these camps many succeeded. Regrettably, their parents and those old enough to understand were not so lucky.

14. I accompanied Ali Javanmardi and his television crew from the Voice of America to the ISIS front lines opposite Mosul, escorted by a Peshmerga truck with a machinegun mounted in the bed.

15. Peering over the sandbags of the Peshmerga front lines at the ISIS line.

16. Looking through a gun port in a sandbag wall at the literal front line of ISIS. On the top of this hill stands the black flag of the Islamic State, marking their forward-most position.

17. A Peshmerga fighter: “We are not afraid of Da’esh (ISIS). They should be afraid of us!”

18. American Ryan O’Leary from Iowa, volunteering as a fighter and medic for the Peshmerga. “I want to help liberate Mosul from ISIS and make sure it doesn’t spread,” he said.

19. The children (and even some of the men) of the Yazidi camp loved to have their photo taken.

21. General Yassin gave me a tour of the forward position overlooking the ISIS line.