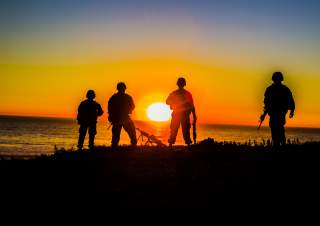 The Trump administration’s “maximum pressure” approach of increasingly rigid economic sanctions and military posturing has not slowed down North Korea’s missile and nuclear testing schedule. Since Trump took office in January 2017, Pyongyang has successfully tested two different types of intercontinental ballistic missiles, a new intermediate-range ballistic missile, a solid-fuel missile based off a submarine-launched design, and its most powerful nuclear device. The Trump administration has consistently opted to increase pressure on North Korea in response to these developments rather than critically examine whether or not such pressure will change the North’s behavior.

The critical flaw in the U.S. North Korea strategy is its unrealistic objective. Washington demands complete, verifiable, and irreversible nuclear disarmament and is not willing to engage in negotiations with Pyongyang unless the latter makes progress towards this objective.

The current U.S. strategy requires offensively-oriented policy approaches in the pursuit of an unrealistic end goal. In order to achieve denuclearization, Washington must compel Kim Jong-un to part with his nuclear weapons by making the costs of possessing nukes unacceptably high. However, because Kim views nuclear weapons as necessary for the survival of his regime, he is willing to tolerate very high costs in order to keep his nuclear weapons. Short of going to war, it will be practically impossible for the United States to impose a high enough level of cost that compels Kim to denuclearize because possessing nuclear weapons is a matter of life or death in Kim’s mind.

The new sanctions enacted by the Trump administration might slow down the development of new weapons and the rate of production of current systems, but this approach will not achieve the goal of denuclearization. Escalating pressure meant to compel Kim to denuclearize will harden his resolve to keep his nuclear weapons. Moreover, given the small size of North Korea’s nuclear arsenal and the relatively poor state of its early warning and command and control systems, Kim is likely to adopt an offensive nuclear doctrine that calls for the use of nuclear weapons early in a conflict. Without a secure second-strike capability, the best option North Korea has for deterring a U.S. attack is to threaten the use of nuclear weapons before the United States can destroy them.

Washington should put aside its quixotic goal of denuclearization and focus its efforts on deterring the first use of a nuclear weapon by North Korea. Such a goal is easier to achieve and strategically wise for a number of reasons.

First, unlike compellence, deterrence is defensively-oriented and is focused on maintaining a status quo, which is generally easier to maintain than change.

Third, abandoning the objective of denuclearization creates opportunity for greater flexibility in the U.S. approach to North Korea, especially in diplomacy. After all, there is little incentive for Pyongyang to negotiate with Washington if denuclearization is the only acceptable outcome for the United States.

Using “maximum pressure” to achieve the denuclearization of North Korea will not work. Instead, the United States should focus its efforts on deterring North Korea from using its nuclear weapons. Sanctions and military forces will still play a role in a deterrence-focused strategy, but moving away from compelling Pyongyang to denuclearize would be a wise choice.