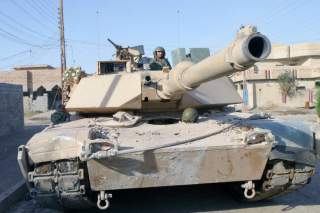 For more than two years, the residents of Fallujah have been lorded over by the Islamic State, which took control of the city in January 2014 from an understaffed Iraqi security force.

Twenty-nine months later, the Iraqi government is striking back with the goal of retaking ISIS’s most important stronghold in Anbar province. Here are five things to keep in mind:

1.    Fallujah the latest in a string of Defeats for ISIS.

If ISIS was a movement on the march in 2014, it is now an organization that is suffering incredible territorial losses. U.S. airpower, an increasingly professional Iraqi army, and an enhanced American training presence have resulted in a series of successive defeats for ISIS in both Iraq and Syria over the past nine months. In November 2015, Sinjar was retaken by a joint Iraqi and Peshmerga offensive; Ramadi was retaken by the Iraqis one month later; ISIS was driven from Shaddadi this past February; and al-Hit was captured by Baghdad last month.

The Iraqi security forces, while still overstretched, have the momentum. ISIS’s oil finances have been depleted by roughly fifty percent and its recruitment of foreign fighters has been reduced exponentially from about 2,000 per month to about 200. A successful ground operation in Fallujah would be yet another setback for ISIS and deprive the group of a staging area that is a short drive from Iraq’s capital.

Over the last several weeks, ISIS has perpetrated the worst violence that Baghdad has seen this year. A series of synchronized attacks in Shia districts of the Iraqi capital claimed the lives of 150 people in a week. This violence included a May 17 bombing in the Baghdad suburbs of al-Shaab, and Sadr City, which not only locked down the capital, but also likely accelerated the antigovernment protests over corruption and mismanagement that have already been at a boiling point since last summer. For a coalition government whose popularity is at a nadir among the Iraqi populace, preventing further mass casualty attacks in Baghdad is a priority that Prime Minister Haider al-Abadi had to elevate as his top priority.

3.    Mosul Operation Could Be Delayed…Again

The U.S.-led coalition has long assessed that driving ISIS from Iraq’s second largest city would be one of the biggest blows to the organization’s appeal and credibility as a jihadist movement. Unfortunately, the Mosul offensive has been delayed repeatedly due to fractious infighting amongst anti-ISIS factions that want a piece of the city’s liberation. If the offensive to clear and hold Fallujah takes longer than anticipated, Baghdad may need to redeploy troops designated for Mosul towards Fallujah to ensure that the city is adequately protected from ISIS counterattacks.

4.    Fallujah is a Political Bright Spot for Abadi

Prime Minister Abadi’s tenure has been difficult. He retains the confidence of the United States, Europe, and the anti-ISIS coalition, but he remains a weak figure in a political system dominated by sectarian quotas, kickbacks, and corruption. Hardline Shia factions in the Iraqi parliament continue to block Abadi’s attempt to appoint a technocratic cabinet with minimal political influence. The Iraqi army’s operation in Fallujah therefore comes at a perfect time for the PM: a successful capture of the city would provide Abadi a boost at a time when he clearly needs it.

ISIS has demonstrated that it will strike back hard whenever it finds itself on the defensive. Territorial, financial, and leadership losses aside, ISIS remains a formidable and ruthless force that is still capable of infiltrating Baghdad’s jam-packed streets. We can expect ISIS to revert back to the Abu Musab al-Zarqawi strategy in the event of further losses on the ground: wholesale, indiscriminate bombings in Shia neighborhoods in the hope of embarrassing Abadi’s administration.

Every inch of land that ISIS loses is a boon for the counter-ISIS effort and for Washington’s campaign to destroy its self-anointed caliphate. But win, lose, or draw in Fallujah, Abadi will still have his work cut out for him. Terrorism is only one problem in an otherwise long list for Iraqis.