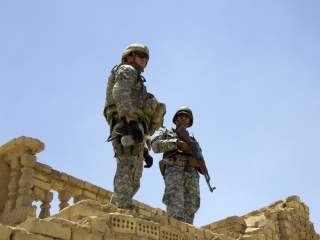 Neither the Islamic State (ISIS) nor other well-funded and organized violent radical groups are likely to be defeated at an acceptable cost by Western military power. Recent historical experience and an analysis of current conditions strongly reinforces this conclusion. The matter is not hopeless, however. An alternative strategy pitting the West’s greatest strengths against the radical group’s greatest vulnerabilities offers the possibility for significantly diminishing the terrorist threat to America.

The United States has been waging a fight against the Taliban in Afghanistan since October 2001 and against various Islamic insurgent groups in Iraq since 2003. Neither struggle has an end in sight. The battle against ISIS began in August 2014, only a year and a half ago. As a 2010 RAND study points out, the duration of America’s counterinsurgent struggles on the ground in Iraq and Afghanistan fit historical norms. If we continue prosecuting the battle against ISIS the same way we did in the current two COIN fights, we’ll almost certainly still be waging an inconclusive struggle 10 to 15 years from now.

The authors noted that battles against insurgencies “with more than two clear parties involved have longer, more-violent, and more-complex endings.” This fight against the Islamic State might be the most complex insurgency of any in recent history. ISIS is fighting not only the West, but also the Russians, Syrians, Turks and other major powers. Moreover, it fights against scores of different and often competing rebel elements—some of who are also antagonistic to the West. But the battle against ISIS has geographically expanded beyond the borders of Iraq and Syria, spreading to more than a dozen different countries.

Bottom line: it is overwhelmingly clear this fight cannot be won militarily.

There is good news, however: the threat posed by Islamic extremism is not invincible. It does have exploitable weaknesses. Using the combined power of America’s diplomatic, economic and military might, there is a way to safeguard U.S. national security. The key is found in the role each aspect plays and where and how it is applied.

Heretofore the United States has selected goals it would ideally prefer, divorced from consideration as to whether the aims can be realistically attained (i.e., a stated desire to “defeat” ISIS without any explanation as to how the limited means employed would actually quash them). Fundamental to success is the selection of campaign objectives that strike an effective balance between what is desired and what is attainable.

The end state of this plan would be the establishment of a safe and sustainable national security environment for Americans and their interests worldwide. Instead of attempting to crush the violent ideology of radical Islam by deploying U.S. military power overseas, America would instead seek to contain it where it currently lies, use its full arsenal of hard and soft power to erode its support over time, and, most importantly, bolster the defense of the American homeland.

Consider what the Islamic State needs in order to remain a viable entity. To keep the financial support flowing and a steady rate of replacements for its killed or wounded fighters, ISIS has to keep itself on the front pages of Western media. To do that, they need to be in continuous battle against U.S. and allied military forces. Deprive them of the daily battles and Western headlines and the allure both to the financial donors and volunteer replacements diminishes greatly—violent financiers are just like business investors in one important way: they both want a return on their investment and if ISIS isn’t providing it, the money will dry up.

To neutralize the threat, the United States could lead a comprehensive whole-of-government and multinational operation in which the joint goals would be first to contain ISIS in its current geographic footprint, second to prevent it from spreading and third to slowly strangle it over time. Humanitarian assistance would be used to relieve the populations suffering under ISIS domination. Work would continue on interdicting all forms of financial and material support to ISIS from outside Iraq/Syria. Concurrently, the U.S. could expand the often-frustrating political work of assisting Baghdad in establishing culturally acceptable–and non-predatory–national, regional, and local governing institutions.

These measures would gradually diminish the allure of joining or supporting ISIS, weaken its power over the local populations under its control, and eventually undermine even the tacit support they get from local communities. In time the Islamic State would collapse under its own rotting weight, likely meeting a violent end at the hands of the people who have been its chief local victims.

Meanwhile, during the years it takes for this process to reach fruition, the United States would protect its citizens by strengthening domestic security. The primary reason that America has been subjected to so few terrorist incidents since 9/11 is because the FBI, CIA, state and local law enforcement agencies have worked relentlessly to protect the country. We should identify those areas of each agency where greater protection could be afforded the nation and where it makes sense, expand those efforts. The greatest value on the money spent for the security of our homeland is in the protection of our borders.

American national security has been perversely put at greater risk over the past fifteen years as a result of increasing use of military power abroad. The radical Islamic groups who wish us harm continue to benefit from the attention given them through Western media resulting from inconclusive but persistent military action in the Middle East. The time has come to break this counterproductive situation, maximize American strengths, expose the weaknesses of terror groups and transition U.S. strategy to something that has a chance to work.

Maintaining the security status quo–or worse, reinforcing failure by increasing the types of tactics that strengthen our enemy–will continue to erode US national security.

Daniel L. Davis is a widely published analyst on national security and foreign policy. He retired as a Lt. Col. after 21 years in the U.S Army, including four combat deployments. The views in these articles are those of the author alone and do not reflect the position of the U.S Government. Follow him on Twitter @DanielLDavis1.