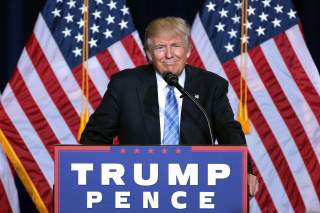 Is Hillary Clinton the world’s candidate for president? One headline even read: “The World is Pulling for Clinton.”

Part of that reaction reflects Donald Trump’s ugly populism. America is not unique in that respect, however. Rodrigo Duterte of the Philippines is more like “Trump” than Trump himself. In Europe a gaggle of populist parties are on the march, some having entered government and others threatening to win upcoming elections. A French President Marine le Pen likely would be more extreme than Trump.

Of greater concern is the fact that Trump cannot be counted on to continue Washington’s bipartisan policy of subsidizing the rest of the world. Much of the Third World expects U.S. financial assistance. Although he has not talked about “foreign aid,” he would be unlikely to continue funding countries which he views as stealing American jobs and flooding the U.S. with illegal immigrants.

There isn’t much evidence that Western economic help actually has meaningfully promoted development. Elites in recipient nations almost always benefit as a result. It’s long been said that foreign aid takes money from poor people in rich countries and gives it to rich people in poor countries. Those in charge don’t want America to cut back.

Even more important to foreign governments is Washington’s commitment to subsidize the defense of virtually every advanced industrialized nation. The Europeans, who collectively possess a combined economy and population larger than ours, are wont to treat Washington’s defense shield as a given. They then scrimp on their militaries, preferring to underwrite bloated welfare states. That a President Trump might upset this convenient deal worries the continent’s leaders.

One European official told the New York Times: “Everyone is freaking out that he might actually win.” According to the Financial Times, European embassies were instructed to figure out what a Trump victory might actually mean. France’s Francois Hollande, a socialist who specializes in spending other people’s money, said that Trump “makes you want to retch.”

For “Old,” or western, Europe there really isn’t much of a threat to defend against. However, the Eastern Europeans have been sounding alarms about the supposed Russian threat, and their western neighbors have not been inclined to do much in response. Instead, everyone expects the U.S. to rush to the rescue—as it has done under President Barack Obama, in response to Vladimir Putin’s latest machinations. Indeed, the Obama administration has done its best to constantly “reassure” its allies, which they interpret to mean that they can freely ignore American pressure to spend more. Why would rational political leaders act differently when Washington will always fill any perceived gap?

Asia is no different. Japan and South Korea also look at America’s defense promises as an entitlement. No matter that Japan long had the second largest economy on earth. Surely the Japanese should not be expected to inconvenience themselves to protect their own interests. That is America’s duty.

The Korean disparity is even more dramatic. The South enjoys 40 times the GDP and twice the population of North Korea. Nevertheless, Trump’s complaint that the Republic of Korea has lived off of the U.S. military and should pay back America for the privilege set off a cavalcade of complaints in the South Korean press. The ROK’s left and right agree on little else than that the South shouldn’t have to fund a major military build-up to defend its own interests.

Until recently the Philippines was even more insistent on winning U.S. backing against China. Manila has a navy of, shall we say, limited capabilities—certainly not prepared to challenge the People’s Republic of China. So Philippine politicians from the president on down have spent years scheming to entangle America and borrow the U.S. military to challenge Beijing. President Duterte has taken a very different approach, but his pivot to China may not outlast his term in office.

Foreign officials apparently cannot imagine a world in which Washington does not provide for their defense. The New York Times reported on “the undercurrent of quiet desperation” in European officials who came to watch the U.S. election. “Or course we are worried, especially those people from NATO countries,” said one. This reliance on Uncle Sam means that “We have a lot of skin in the game,” according to German ambassador Peter Wittig.

Josef Joffe of Die Zeit argued: “If a President Trump made true on his threats against NATO, the suddenly exposed Europeans would have to make nice with Russia.” Actually, there is an alternative. The Europeans could spend more on their own defense. However, Joffe apparently doesn’t view such a possibility as worth mentioning. Nor do the Europeans. After all, in their view defending Europe is Washington’s job. Always.

Both the Obama administration and Clinton campaign have done their best to convince the Europeans that America will always do its duty as the former see it, that is, put the interests of nominal allies before that of the U.S. Americans simply must resign themselves to forever coddling Europeans who can’t be bothered to protect themselves.

Julianne Smith, who worked for Clinton after serving under Vice President Joseph Biden, said she found her role at the Democratic convention to “reassure Europeans.” Democratic Vice Presidential nominee Tim Kaine denounced the GOP candidate for wanting to “abandon” NATO nations. Former Secretary of State Madeleine Albright, infamous for having asked Colin Powell why we didn’t use the wonderful military he kept extolling, complained about Trump’s threats to “walk away from our friends and allies,” that is, expect them to act as mature states rather than welfare dependents.

No wonder the New York Times proclaimed that the Europeans found a “soothing” message in Philadelphia at the Democratic national convention.  An Italian diplomat told the Times that “I’ve seen a genuine willingness to stay engaged,” defined as America protecting everyone else’s interests. In her view, if Clinton wins all will be right in the world, at least for those relying on America’s defense dole.

There are, of course, lots of good reasons to vote against Donald Trump. But perhaps the best justification for voting for him is to upset the expectations of those who believe that American taxpayers exist for the benefit of the rest of the world.

Who knows what Trump would actually do in office? His idea of charging allies for protecting them is a bad idea: the U.S. military should not be hired out like a mercenary force. Nevertheless, he recognizes the problem. Those capable of defending themselves and their regions should do so. Not Uncle Sam.

Why is Washington expected to rush more troops to the manpower-rich European continent whenever the Baltic States have a collective nightmare? Why are Americans charged with the defense of South Korea, whose politicians see no reason to put in anything close to the North’s effort? Why did Tokyo decide only last year that it could aid U.S. ships under attack, vessels expected to instantly respond to any strike on Japan? The problem extends to the Middle East: Saudi Arabia and the other Gulf States actually spend far more on defense than does Iran, yet demand that America do their bidding against its own interests by intervening in tragic yet irrelevant civil wars such as Syria and Yemen.

Americans should vote for the candidate best able to serve the U.S., not the rest of the world. In fact, a decided preference for a candidate by officials of other nations is a powerful argument against electing that person president. Those in Washington should take the interests of others in account, but should never forget who they are obligated to serve.