Forgetting Phase IV All Over Again in Iraq 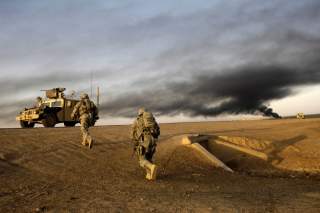 The strategy that the United States is following to “disrupt, degrade, and ultimately defeat” Daesh is to conduct an air campaign against their strongholds and personnel in Iraq and Syria, and to support whatever ground force is willing to go up against them. It is not the policy of the U.S. to provide that ground force. Instead, the U.S, has worked to put together a coalition of regional parties—Arab countries as well as “moderate” Syrian rebels—to provide an effective ground force, with no success to date.

U.S. military joint doctrine divides conflict into six phases: (0) Shape, (I) Deter, (II) Seize the Initiative, (III) Dominate, (IV) Stabilize, and (V) Enable Civil Authority. At present, the conflict is stuck in Phase II and will continue to be so until an effective ground force can be found. During Phase II the Joint Force Commander (JFC) seeks “to seize the initiative through the application of appropriate joint force capabilities.” The one “appropriate joint force capability” that is currently lacking in the fight against Daesh is an effective ground force. Without an effective ground force it will be impossible to transition to Phase III, the Dominate phase (“breaking the enemy’s will for organized resistance”).

Phases are linear (well, they are supposed to be, anyway) and have distinct transition points and criteria. Phases II and III are the “break things and kill people” phases, and the U.S. military is exceptionally good at them. Phase IV (Stabilize) “is required when there is no fully functional, legitimate civil governing authority present”, and Phase V (Enable Civil Authority) “is predominantly characterized by joint force support to legitimate civil governance in theater. The goal is for the joint force to enable the viability of the civil authority and its provision of essential services to the largest number of people in the region.” It is Phases IV and V that the United States has recently had more difficulty with, both as a military and as a nation.

In Phase IV “the joint force may be required to perform limited local governance, integrating the efforts of other supporting/contributing multinational, IGO, NGO, or USG department and agency participants until legitimate local entities are functioning.” Phase V (Enable Civil Authority) wasn’t even a phase until recent versions of Joint Publication 5; in fact, it was not a defined phase during the initial invasion of Iraq, which assuredly contributed to the abysmal Phase V performance there.

Currently there are a lot of voices clamoring for the United States to provide a ground force to fight Daesh. It is my belief that a U.S. ground force could effectively complete Phase II and then transition to and successfully execute Phase III operations against Daesh (“breaking the enemy’s will for organized resistance”). While there has been much discussion of expanding the U.S. effort against Daesh, there has been virtually no public discussion of Phases IV and V. This is what got the United States into trouble in Iraq, where the post-Phase III plan was de-Baathification, disestablishing the Iraqi military, and waiting for democracy to break out (amongst a population that had absolutely no idea what representative democracy was).

Clausewitz tells us that war is an extension of politics by other means. Here he is referring to national policies and goals, which derive—or should derive—from national interests. Certainly preventing a direct attack on the homeland and the American people is a national interest, as is honoring treaty commitments to allies. But does preventing Daesh from attacking America or its allies require a ground offensive by U.S. troops? The American people are told that if they don’t fight Daesh “over there” they will have to fight them in the United States—this, despite the total lack of evidence of Daesh infiltrating the American homeland.

I am fast becoming a fan of the Nixon Doctrine, which I believe the Obama Administration has dusted off: we will protect our core interests, we will defend our allies, but local/regional folks are going to have to help with solving local/regional problems. In the most recent National Security Strategy, the President calls for “a more sustainable approach” of “collective action with responsible partners” to counter “the persistent threat of terrorism.”

To pay for, to kill for, or to die for—as useful a way as any to analyze the importance of national interests, and the efforts to defend them. The United States is willing to pay to destroy Daesh (Jordan, Turkey, Syrian rebels, Iraq, etc.), to kill Daesh (the bombing campaign), and now to put a few more lives at risk (deployed SOF forces). But I am not convinced America has enough reason to commit large ground forces to this effort. I submit that those who want the United States to invade western Iraq/eastern Syria to fight Daesh are overly focused on Phase II/III operations, and are conveniently overlooking the difficulty, time, expense and casualties associated with Phases IV and V—as did the Bush administration in invading Iraq. Phase II and III operations should not be discussed at the expense of planning for Phases IV and V, and certainly should not be undertaken until a plan for Phases IV and V has been developed and committed to by the American people.

There is a saying in the militaries of the world: amateurs talk about tactics, professionals talk about logistics. This can be extended to planning for war: beware of anyone who beats their sword against their shield and tells you how easy it will be to defeat the foe, but won’t tell you how long, hard, and expensive it will be, in blood and treasure, to win the peace.