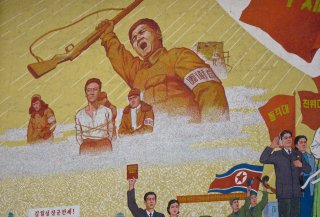 The Korean Peninsula long has provided one of the greatest political challenges facing Washington, DC. But it’s not just North Korea. Today, the South is in political flux, with a rushed presidential campaign to come, a new president to take office in May and a potentially dramatic change in foreign policy.

On Friday, the Constitutional Court confirmed the National Assembly’s impeachment of President Park Geun-hye. An election must be held within two months, likely on May 9.

Park’s dramatic downfall was as unexpected as it was sudden. The once dominant ruling party is now a political wreck, its former members divided and dispirited. The Saenuri Party has broken in two, while a small, dedicated band of Park backers have criticized party officials for abandoning her.

She has no obvious successor, and most of the right’s potential presidential candidates poll in the single digits. The campaign will unfold with Park facing interrogation and arrest, following many of her subordinates. Domestic issues will likely dominate the debate, including regulation of the chaebols, or family corporate conglomerates, currently at the heart of the Park scandal.

Still, while few would bet on the right retaining power, nothing is certain in Korean politics. Returning UN secretary general Ban Ki-moon had been expected to ascend to the top of South Korea’s political charts. Instead, he dramatically flamed out and abandoned his planned presidential run. A new face or foreign provocation, always a possibility from North Korea, could unexpectedly transform the race.

If the campaign follows its expected trajectory, however, the left will win. In contrast to normal campaigns, there will be no transition, with the winner sworn in immediately. The victor will confront a government filled with Park’s appointees, entrenched after nearly a decade of conservative rule.

Today’s front-runner, Moon Jae-in, is the former leader of the main opposition party who lost to Park five years ago. His leftish domestic inclinations don’t much matter in Washington. In contrast, his attitude toward America and North Korea could generate heartburn for the Trump administration.

Like most South Korean politicians, Moon says he supports the alliance, even proclaiming himself to be “America’s friend.” Where’s the fun in having to spend more on defense if a friendly superpower can be conned into doing so?

He recently sought to burnish his national-security credentials by adding former military leaders to his think tank. Nevertheless, such efforts have a forced feel about them, since no one would mistake him for a hawk.

Moon almost certainly would change the Republic of Korea’s relationship with Washington. He recently declared that the ROK should be willing to “say ‘No’ to the Americans.” He also stated that “experts share the view that we should confidently engage in our diplomacy for ‘our national interest’.” A top adviser from Ewha Womans University, Suh Hoon, said, “A paradigm shift in diplomatic approaches is required,” with expanded contacts throughout Asia and Europe.

Even more dramatic might be the change in relations with the Democratic People’s Republic of Korea. Moon complained that South Korean policy toward Pyongyang over the last decade, largely mirroring the U.S. approach, had consisted of little more than “bad-mouthing the North” and “comprehensively failed.”

North Korea should be one of the ROK’s “top priorities,” he said, which should be resolved with “the cooperation with the U.S. . . . while taking responsibility for our security.” He said sanctions were necessary, but to force Pyongyang to negotiate. He pointedly observed that economic penalties had not halted the DPRK nuclear program.

If elected, he proposes reviving the “Sunshine Policy,” of Presidents Kim Dae-jung and Roh Moo-hyun, the latter of whom he served as chief of staff. The policy sought to moderate the North’s policies through aid and trade. Moon said that although he abhorred the Kim regime, “We must embrace the North Korean people as part of the Korean nation, and to do that, whether we like it or not, we must recognize Kim Jong-un as their ruler and as our dialogue partner.”

Moon proposes reopening and dramatically expanding the Kaesong Industrial Complex in the North, in which 124 ROK manufacturers had employed fifty-four thousand North Koreans. The zone provided the DPRK with roughly $100 million in hard currency a year—and about a half billion dollars since it opened in 2004—only a fraction of which was paid to the workers. Park closed the complex last February in retaliation for the DPRK’s missile and nuclear tests.

However, reengaging Pyongyang won’t be easy. The last round of South Korean investment, trade and aid only seemed to fund missile and nuclear programs, which continued to advance over the last decade.

Popular opinion has shifted against the North, especially after two violent North Korean attacks in 2010. In fact, attitudes of younger South Koreans most closely mirror those of the oldest generation which, because of the Korean War, views the North as an enemy. For the Sino-DPRK website, Phillip Lee and Steven Denney observed that “South Korea’s youngest generation has taken a new, and decidedly more aggressive stance on North Korea.”

Moreover, bilateral and multilateral sanctions against the DPRK have been greatly strengthened over the last decade, which would make it even more difficult to expand inter-Korean economic cooperation. If South Korea flouts the restrictions, Seoul won’t be able to press China to pressure the North.

Prospective president Moon’s sharpest conflict with the United States might come over deployment of the Terminal High Altitude Area Defense anti-missile system. Moon originally opposed the decision, which triggered Chinese government commercial retaliation and popular economic boycotts. His party has called for suspension of deployment and review of the policy.

However, with elections nearing he has become more circumspect, emphasizing that the decision should have been left for Park’s successor. Said Moon: “I cannot understand why there should be such a hurry with this. I suspect that they are trying to make it a fait accompli, make it a political issue to be used in the election.”

He also offered a lot of diplomatic-speak, suggesting that he might want to shift the center of gravity of the South’s international relationships. Although “we have mutually beneficial relationships,” including with the United States, said Moon, the South had to “prioritize national interests.” Moreover, he declared: “Since we can have more bargaining chips in negotiations and dialogues, there is an assessment that we can have a reciprocal and progressive negotiation.”

However, there are more radical contenders on the left, such as Seongnam mayor Lee Jae-myung, who gained notoriety in the campaign for Park’s ouster. Lee portrayed himself as the ROK’s Bernie Sanders, challenging the South Korean traditions of corporate power and economic privilege.

More dramatically, Lee recently complained that U.S.-ROK ties had “degenerated into a subordinate relationship where we give whatever amounts of money they ask us to give.” He argued: “The U.S. should be begging us for the defense of East Asia.” Unsurprisingly, he wants to talk with the North, reopen Kaesong and block THAAD. He also advocates sending America’s nearly twenty-nine thousand troops home and renegotiating the free-trade agreement with the United States—seemingly channeling President Donald Trump. Lee is likely to lose his party’s primary to Moon, but, like Sanders, may drive the debate leftward.

In the midst of these developments, Washington has done little other than affirm the importance of the alliance after the candidate’s sharp criticisms of Seoul’s dependence on America. The Trump administration says it is conducting a policy review but it’s not clear who is doing so, since the State Department’s upper reaches remain largely vacant of political appointees.

The Obama administration largely abandoned any effort to engage the North, seemingly hoping it would go away, but that approach was viable only because the last two Korean governments, which largely overlapped with President Barack Obama’s time in office, were equally committed to isolating Pyongyang. Alas, the result is a better armed, more volatile and less predictable North Korea. No one wants a repeat with the Trump administration.

Secretary of State Rex Tillerson is going to Asia for discussions “to try to generate a new approach to North Korea,” according to the State Department. But the policy options sound like more of the same: more demands, sanctions, deployments and threats—none of which have worked in the past.

Candidate Trump indicated a willingness to talk with Kim Jong-un, but UN ambassador Nikki Haley seemed to foreclose any such outreach, denouncing Kim as irrational. She went on to hint of possible military action, stating “I can tell you we’re not ruling anything out, and we’re considering every option.” However, the whiff of gunpowder doesn’t go over well in Seoul, which is within reach of North Korean artillery and missiles.

Rather than wait for President Moon, or whoever else wins the May election, President Trump should take the initiative. First, he should set as his ultimate objective turning South Korea’s conventional defense over to the ROK. Any future augmentation in military forces should come from the South, which retains an overwhelming economic, technological and population advantage over the DPRK. It’s time Seoul used those advantages. If the South Korean people perceive no serious security threat from the North, there’s no need for American troops to stick around.