German Politics Is Giving Rise to a New Tide of Populism 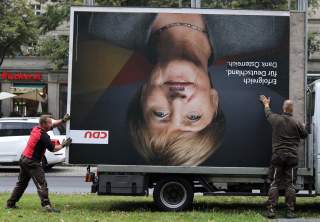 German chancellor Angela Merkel won an overwhelming victory yesterday and is destined to serve a fourth term as Germany’s head of government. However, her victory looks Pyrrhic, as the two traditional ruling parties continue to hemorrhage voters.

Merkel’s Christian Democratic Union/Christian Social Union combination (they are sister parties, with the latter running only in Bavaria) had its worst result since the Federal Republic of Germany’s first poll in 1949, receiving 33.0 percent (according to preliminary returns). Moreover, the CDU/CSU sustained the largest drop of any party from the election four years ago, when it received 41.5 percent and almost gained a majority in the Bundestag on its own. No wonder Merkel said she hoped to win back voters from the Alternative for Germany, which attacked her government from the right.

However, while the SPD lost less in absolute terms, dropping from 25.7 percent to 20.5 percent, it also suffered its worst result since 1949. One of the country’s two major governing parties, it won the allegiance of barely one-fifth of voters. In what once was East Germany the SPD of Germany, heir to the Marxist-oriented working class movement, which famously arose in authoritarian Prussia, came in third, after the AfD.

Four years ago the two main parties accounted for almost two-thirds of the votes. This time they barely gained half. Four other parties will be represented in the Bundestag. Die Linke, the former East German communists, rose from 8.6 percent to 9.2 percent, and the Greens edged up from 8.4 to 8.9 percent.

Moreover, the two parties that failed to meet the five percent threshold for entering parliament in 2013 did substantially better this time. The Free Democratic Party and the AfD together collected nearly a quarter of the vote, meaning nearly one-out-of-four parliamentarians will represent viewpoints absent over the last four years. The FDP, representing European liberalism (generally free market and pro-enterprise), rebounded from its shocking collapse with 10.7 percent of the vote to return to the Bundestag. The Free Democratic Party had been Merkel’s coalition partner from 2009 to 2013.

The AfD did even better, gaining 12.6 percent of the vote. Four years ago the AfD was essentially European-liberal but Eurosceptic, that is, critical of the Euro, the continent’s common currency. The Afd was also opposed to the European Union creating a debt and bail-out union, which forced Germany and other more prosperous states to subsidize perceived wastrals, especially Greece. However, nationalist-populists soon ousted the libertarian-leaning leaders and seized control of the party, which began to win enough votes to enter several state parliaments.

The AfD’s ascent brings to mind France’s National Front, Britain’s United Kingdom Independence Party, and other populist groups across the continent. However, while AfD is nationalist, even xenophobic, showing hostility toward immigrants and Muslims, it is not a fascist party or the Nazis reborn. Indeed, 60 percent of its voters based their support on disappointment with the major parties rather than enthusiasm for the AfD. Nevertheless, many of its candidates and leaders espouse unsavory and unsettling views. For the first time since World War II a far-right party has entered the Bundestag.

Until now the CDU/CSU managed to define the acceptable rightward limit of German politics. However, the crisis triggered by mass refugee flows from the Mideast—Germany accepted roughly a million migrants in 2015—created dissension even within Merkel’s own party. And the mass influx energized the AfD; the movement demonstrated continued potency even as the number of migrants fell by three-quarters last year and dropped even more this year. The party’s most popular candidate, Alexander Gauland, a member of the AfD’s more extreme faction, declared of Merkel: “We will hound her. We’ll get our country and our people back.”

The new Bundestag likely will yield a new governing coalition. Even with Die Linke, currently shunned by the other parties, the left cannot reach a majority. Such a coalition would have to include the AfD, which the major parties similarly agreed to ostracize. The CDU/CSU could again join with the Social Democratic Party, for the third time under Merkel, but the latter lost politically from its previous such partnership. She is a political chameleon who shamelessly stole her opponent’s policies, making it hard for the social democrats to criticize the head of a government they had been part of. The party’s leaders appear united in rejecting a new coalition. They buttress their case by insisting that it would be inappropriate to allow the AfD to act as the official opposition—a privilege afforded the largest “out” party—giving it significant advantages within the Bundestag.

The preferred result for the right would be a CDU/CSU-FDP coalition, but the two parties don’t have enough seats and refuse to include the AfD. That leaves the so-called “Jamaica” coalition with the Greens. (The party colors of black, yellow and green are the same as Jamaica’s flag.) The numbers work, but the Greens are split between ideological lefties and moderates with a special passion for the environment. Forging a common government program that satisfies them as well as the pro-business FDP won’t be easy, especially since the latter blames its collapse in 2013—when the party fell from 14.6 percent the previous election to 4.8 percent—on failing to achieve much of its economic agenda. Thus, the Free Democratic Party won’t sell its participation cheaply.

Four years ago it took roughly three months for the CDU/CSU and SPD to reach a coalition agreement and take office. This time it could take even longer. There’s at least a possibility that the SDP might ultimately be drafted as the only option. Merkel has already urged the party to reconsider its opposition, though its members don’t want to consider the possibility today.

The specific coalition will have ramifications throughout Europe. French president Emmanuel Macron had hoped to win Merkel’s support for a stronger consolidated government in Brussels, with a continental budget and finance minister. That approach would face opposition within the CDU/CSU, many of whose members have tired of writing checks to Greece in violation of EU rules. But the SPD and Greens might go along. The FDP, however, says it would agree to no such change. For this reason Macron bewailed the prospect of the Jamaica coalition.

In contrast, the latter coalition likely would boost Merkel’s promise to almost double military outlays by 2024. Any sustained increase will be difficult, since the German public perceives few foreign threats. However, the SPD actively campaigned against a military build-up. The Greens and Free Democratic Party might be more willing to compromise as part of coalition negotiations.

The latest election results offer the good, the bad and the ugly. The good is the FDP’s return to national politics. It is the only Germany party with even a nominal commitment to individual liberty. The CDU/CSU is largely indistinguishable from the SPD as a proponent of an expansive and expensive welfare state.

The bad is the rise of the AfD. Although the party doesn’t look like a modern variant of the National Socialist German Workers’ Party, it will add a new, hostile dimension to German politics. The original AfD backed a more restrained—and thus more realistic—vision of European integration. The current iteration has tainted controversial though legitimate popular concerns by turning them into weapons of intolerance.

The ugly is the growing polarization of politics and shrinking mainstream in the Federal Republic. EU leaders convinced themselves that the bad times were behind them after Macron’s victory over the National Front’s Marine Le Pen. But his popularity is tanking. And Germany’s election continues the trend, broken only by last June’s British poll, of major parties losing support to a multiplicity of smaller groupings. Governing is becoming ever more difficult.

Of course, the establishment parties have earned their problems. Little separates the major parties in Europe, either in terms of domestic programs or continental policies. And the results have not been pretty. With respectable figures unwilling to challenge the status quo, no matter how flawed, voters naturally turned elsewhere. The problem in Germany is not that the CDU/CSU and SPD have shed so many supporters. It is that so many ended up with the AfD. Between Die Linke and the AfD, more than one-fifth of the German electorate opted for extremist parties with ugly pedigrees. These parties are unlikely to provide the serious, responsible debate warranted on a number of tough issues.

After yesterday’s vote Europe’s most populous and prosperous nation looks slightly less stable. The immediate changes are likely to be small. But if Germany’s mainstream politicians don’t start offering better solutions, the established political order will continue to fracture. And the populist tide will continue to rise.