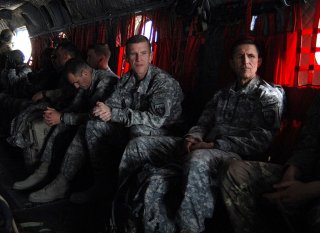 National Security Adviser Susan Rice needs a long rest. She recently stated that she didn’t “have the luxury of focusing on” only three nations, as suggested by the Washington Post in an interview. After a reporter (presumably jokingly) asked about Canada, she replied that it was one of the few countries on the planet that she didn’t bother to stress over.

It is hard to imagine how tired she must be. The planet is large. It has about two hundred nations. That means she must be worried about, oh, at least 180 or 190 countries, depending on her definition of “few.” That would keep even the calmest person in a frenetic state.

Indeed, the former president who began his term by being awarded the Nobel Peace Prize ended his term being at war every single day. That’s an extraordinary record. Since 9/11, “America has gotten involved in more conflicts across the globe than in any previous period,” explained Matthew Gault in War is Boring.

Nothing changed under the Nobel laureate. “Right now, America is fighting a war in Afghanistan—the longest in its history—plus a war against Islamic State in the Middle East, a campaign against Islamic radicals in Pakistan, several different operations in and around the Horn of Africa and—if you ask the Houthi rebels—a war in Yemen too,” Gault wrote. Last year alone, 26,171 bombs were dropped by American forces. More were supplied to Washington’s ally Saudi Arabia for use in America’s undeclared war against Yemen.

Obviously, the world is a messy place. But what stresses American policymakers? It’s not the problem of defending America. In fact, that’s rather easy and doesn’t require either constant war or pervasive stress.

No other country has a conventional capability to reach America. The United States enjoys the protection of large oceans in the east and west that are buttressed by overwhelming maritime superiority. America also benefits from Pacific neighbors north and south and is backed by air superiority. Thus, the United States will not be invaded. It will not be blockaded or bombarded. In this way, the national security adviser—along with the president, secretary of state and other U.S. officials—need not worry about the sort of potential threats facing virtually every other nation on earth. That includes America’s chief rivals, China and Russia.

Only the latter two countries possess nuclear weapons and intercontinental missiles, with the theoretical will to use their arsenals against America. Both would be destroyed in return, which makes such a conflict unthinkable. Nevertheless, the national security adviser should stress at least a bit about these two nations, since they pose a theoretical existential threat to America.

North Korea is seeking to join China and Russia with its own missile and nuclear programs. While not there yet, the North eventually could, depending on the size of its resulting arsenal, threaten American cities as well as bases in East Asia. However, Pyongyang’s desire for such a deterrent and threat to use is a reaction to the decision Washington, DC made to place troops in South Korea, and other forces in Japan and elsewhere in the region.

Absent America’s presence, the DPRK would have no interest in a potentially suicidal attack on the United States. So the possibility of America becoming a target almost entirely reflects the determination of Washington, DC to intervene in situations thousands of miles from home and engage in a great-power competition that involves no vital American interests. Allow the residents of Northeast Asia to sort out their relations so that the NSA can go back to sleep.

The only other obvious direct threat against America comes from terrorism. It is horrific, but almost entirely non-state. It also mostly grows out of U.S. foreign policy. By way of explanation, not justification, the more Washington, DC bombs, invades and occupies other countries, the more enemies it creates. The more foreign peoples—particularly Muslims—that Washington, DC kills, the more other people will want to kill Americans. Those who lack the conventional means to resist—carrier groups, air wings, armored divisions—look to alternative methods, which include terrorism.

America is not alone. Sri Lanka, Russia, Iraq, Israel, India, Europe and others have suffered similarly as a result of their policies. The good news is that while the threat is awful, it is not existential. The global war on terrorism is not World War III. The better news is that the U.S. government could reduce the threat by being more judicious before making the enemies of other nations America’s enemies or embracing states that are busy making more enemies. For example, America is helping to kill Yemenis for the benefit of the Saudi royal family. Better U.S. policy would result in less stress for the next NSA.

Beyond these issues, the dangers to America—and causes of stress—ebb very quickly. Europe matters economically and strategically, but there’s really no need for U.S. officials to worry much. The continent isn’t likely to collapse economically, despite continuing eurozone strains and Britain’s looming departure from the European Union.

The rise of populist politics in some countries is ugly, but the impact appears limited. Even the worst of the anti–European Union parties fall short of fascism, and none of them evinces the slightest interest in conflict with other nations. Besides, is there much Washington, DC can do? Lectures over economic policy have been ill received,and Europeans are no more likely than Americans to appreciate electoral interference.

Despite frenetic efforts to bolster NATO—caused by the fact that most Europeans perceive little military threat from Russia and prefer to spend their money on domestic pursuits—the likelihood of a Russian invasion appears only slightly more likely than one from Mars. Moscow has shown no interest in targeting even the Baltic states, which are viewed as most at risk, and the Putin regime would gain little while losing much if it started a war.

Will Georgia and Ukraine remain weak and vulnerable? Yes. They spent most of their existence as part of the Soviet Union and, before that, as part of the Russian Empire. Their situation is tragic, but of little geopolitical interest to Washington, DC. It’s certainly nothing for the NSA to stress over.

Africa has become a growing battleground for the United States. That battleground has remained largely out of the public eye. Even then, there is little there that poses a significant threat to America. Washington’s biggest problems have been self-inflicted: supporting tyranny in Egypt for decades, blowing up Libya in the name of “liberation” and sending U.S. forces off on quixotic missions, such as hunting down the Lord’s Resistance Army. More broadly, Africa has enjoyed a bit of a renaissance, with economic growth and democratic progress. There are places America can help, but the continent’s destiny remains largely its own. U.S. officials need not stress out.

Latin America is much the same. NAFTA has been beneficial, despite what Trump has said, and Mexico has matured economically and politically. The major threat to it and some other states comes from the drug trade, which is fueled by America’s policy of prohibition. That policy has turned illicit substances into a huge revenue source for gangs and guerrillas alike. Otherwise, Cuba and Venezuela cause substantial concern, but not because they threaten the United States. The incoming NSA might cast a wary eye on developments south of the border, but need not stress about this part of the world.

In contrast, the Middle East is a constant horror, but that shouldn’t bother the NSA nearly as much as it has in the past. America’s twin concerns, Israel and oil, matter less these days.

Nuclear-armed Israel is a regional superpower, with working relationships with Egypt, Jordan and Turkey (recently restored), and shared if unpublicized interests with the Gulf states, which fear Iran. The real threat to Israel, as Secretary of State John Kerry recently observed, is whether Israel can remain both Jewish and democratic if it destroys the possibility of a two-state solution. The NSA could best reduce stress by ceasing U.S. subsidies for a half-century occupation of Palestinians which treats them like ancient Helots, leaving Israel to bear the full consequences of its self-destructive policies.

With the expansion of energy production in America and elsewhere around the world, the Middle East’s oil matters less for the industrial world. Saudi Arabia and the other Gulf states seem reasonably secure, spending far more on their militaries than Iran. Their internal stresses are serious, but largely beyond the reach of Washington, DC. Absent a true jihadist takeover, any subsequent regimes in that area would sell the oil, which is what keeps those societies afloat.

The Iran agreement reduces the likelihood of an Iranian nuke. Meanwhile, it increases an internal political conflict as the younger generation sees greater economic opportunities beyond Islamist tyranny. Warnings of a new Iranian empire are overwrought. Influence in the wreckage known as Syria, the sectarian morass of Iraq (created by George W. Bush’s invasion), impoverished and long-divided Yemen, and paralyzed Lebanon do not compare to Saudi Arabia’s domination of its neighbor Bahrain or influence across the Gulf and beyond.