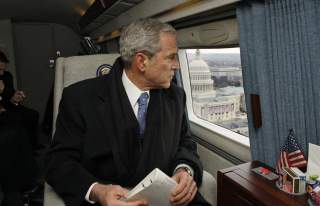 President Obama took office promising change and a “new direction” for American foreign policy. To what degree—if any—did he fulfill this promise? The Center for the National Interest partnered with the Charles Koch Institute to host a foreign policy roundtable. Participants responded to the question: After eight years of Bush and eight years of Obama, what’s changed? Watch the rest of the videos in the “Grand Strategy” series.

Partisan pundits would likely recoil at the suggestion that George W. Bush and Barack Obama pursued similar foreign policies, but if we set aside partisanship and look past the rhetoric surrounding U.S. foreign policy, what will we find? Are the foreign policies of George W. Bush and Barack Obama at all similar? The Bush administration oversaw the invasions of Afghanistan and Iraq, waging long and expensive wars while calling for democracy and freedom to be exported to the Middle East. Supporters of those policies often accuse President Obama of “retreating” from the world and “leading from behind,” despite his decision to continue the fight in Iraq and Afghanistan, intervene in Libya, and add a theater in Syria. Yet this is a fiercely contested narrative.

John Mearsheimer of the University of Chicago argues that the respective grand strategies of the second Bush administration and the Obama presidency share “a great deal of continuity.” Mearsheimer observes that Bush and Obama were both interested in the same fundamental objective: regime change in the Middle East.

President Bush’s invasion and attempted democratization of Iraq may be the most flagrant case of American-led regime change in the Middle East. However, the Obama administration has demonstrated similar instincts. Indeed, it was under the Obama administration that the United States invaded Libya, to catastrophic effect. Mearsheimer notes that it was Obama who involved the American military in Syria, who “upped the ante in Afghanistan,” and who “put us back in Iraq.”

Ultimately, Mearsheimer concludes that while the Obama administration has been “more measured” than the Bush administration, both pursued “a foolish grand strategy, and one that’s not going to work.”

Andrew Bacevich of Boston University takes things a step further. In fact, he contends that the United States has not followed a coherent grand strategy under either president. He states that, at best, the United States has indefinite “aspirations … of how the world is supposed to be.” Bacevich asserts: “If a strategy is supposed to relate means to ends and explain how the two connect, then there really is no strategy” being followed by the United States right now. Instead of pursuing a clear strategy, he says, “we just continue to fight on, with some vague expectation that sooner or later, things will turn a corner and get better.”

Barry Posen of the Massachusetts Institute of Technology defends the assertion that American foreign policy follows a definite strategy. However, he agrees with Mearsheimer that there is significant continuity between the Bush and Obama administrations, saying that “at the highest level, [it’s] the same; it’s still this liberal hegemony strategy.”

However, Posen does identify several differences. He suggests that President Obama has at least been “sensitive to many of the problems that have arisen” from President Bush’s strategy in Afghanistan and Iraq. For example, Posen notes that Obama is aware of “the problems of putting too many American troops” abroad, for the sake of both U.S. soldiers and the local residents. Posen also argues that Obama recognizes the power of nationalism as a political motivator for resistance against foreign intervention and occupation. Perhaps most important, Posen affirms that the Obama administration has been “sensitive to the problem of turning military power into political ends.”

Posen acknowledges that “these things are all to the good, that [Obama has] some sense that there are deep-seated problems with implementing this strategy.” But foreign policy requires more than just a hazy awareness—it demands that tactics adapt to the strategic reality. Following this line of thought, Posen identifies a critical issue: “Once you acknowledge these problems, can you continue this grand strategy?”

Christopher Preble of the Cato Institute suggested considering whether any president can alter the current grand strategy. He agrees with Posen that President Obama may appreciate the strategic obstacles that resulted from the Bush approach. However, Preble concludes that “the end result is the same.” From his perspective, this suggests that “even if the president of the United States, the person who’s supposed to conceive and guide foreign policy, even if he wanted to [change it], I’m not convinced he actually could.”

Harvard University’s Stephen Walt shed light on an imbalance in Washington which he believes renders the president incapable of actually commanding American foreign policy. Specifically, he contends that proponents of liberal hegemony carry more sway in the nation’s capital than skeptics of regime change and nation-building. This national security establishment, famously referred to as “the Blob,” creates enormous institutional friction that proves difficult to overcome. A poll conducted by the Charles Koch Institute and the Center for the National Interest further illustrates the divide between “the Blob” and voters. The poll found that only 14% of registered voters think American foreign policy over the last 15 years has made the United States safer. Similarly, the poll found that 50% of Americans think that U.S. foreign policy since 2001 has made the world less safe.

Michael Desch of the University of Notre Dame observes that there are “people outside the ‘Beltway consensus’ that are unhappy with the debate between the two 48 yard-lines.” What can these war-weary Americans do to shift the terms of America’s current foreign policy debate? They can start by having a vigorous discussion about what the aims of American foreign policy should be.