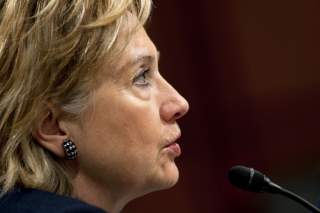 Conspiracy theories about Hillary Clinton’s health aside, her early departure from a 9/11 commemorating event at Ground Zero and video footage of her fainting spell don’t look good. The statement by her doctor that Hillary contracted pneumonia about a week ago and that she was advised to re-arrange her campaign schedule won’t help matters. “Faintgate” is going to inevitably be used by Clinton detractors as yet more evidence that she is unfit to govern. For his part, Donald Trump is taking the high road and expressing the hope that she "gets well."

But what if Hillary Clinton is truly so unhealthy that she decided it was best for the Democratic Party to quit the race? A major party nominee giving up on the White House journey with less two months to go has never happened before; in fact, no major party has had to scramble and deal with a situation like this, an event that would incite a panic of epic proportions. As one might expect, however, the Democratic National Committee has a contingency plan in case some unforeseen development happened — including the departure of their nominee for President of the United States.

How would the Democratic Party respond?

The normal process of picking a presidential nominee has been rather consistent since the days of George McGovern’s horrendous defeat to Richard Nixon in 1972. States hold their own contests (primaries or caucuses) and the first candidate to receive a certain number of delegates (including superdelegates) is crowned the Democratic Party’s nominee. Think of it as 50 primary elections rolled into one, where Democratic voters are active participants in the process alongside the party’s top-tier officials.  That decision is then formalized during the Democratic National Convention without much fanfare.

If Hillary Clinton or any other Democratic nominee had to leave the race, the DNC would need to gavel back into session and re-do the process all over again. The DNC consists of more than 200 members, selected by Democrats in all 50 states as well as the chairs and vice chairs of each state party. Except this time, the average Joe rank-and-file Democrat would be shut out; it is the DNC officials that were railed at throughout this year’s campaign who are afforded the power of finding a replacement.  Article III, Section 1, the clause that provides the DNC with that power, is as straightforward as can be: "The Democratic National Committee shall have general responsibility for the affairs of the Democratic Party between National Conventions...This responsibility shall include...filling vacancies in the nominations for the office of President and Vice President.”

How does it happen?

When a vacancy occurs, the Chairman of the Democratic National Committee calls an emergency or special session of the DNC. In order for a decision on a new nominee to be binding, at least a majority of DNC officials need to be in attendance.  Of that majority who show up, a new nominee is gaveled in by a majority of the votes cast. That means, theoretically, a replacement nominee could win the job with 25% of the DNC’s membership — numbers that don’t exactly demonstrate confidence.

Has this ever happened before?

Answer: no. But on two separate occasions, the Republican and Democratic parties had to replace their vice presidential nominee - first in 1912, when James Sherman died and the RNC met to discuss an alternative (it didn’t make a difference, because the meeting was held after Election Day happened and Democrat Woodrow Wilson won) and again in 1972, when the DNC voted to replace Thomas Eagleton after his resignation as George McGovern’s VP.

Why this procedure stinks?

This is a simple one to answer: because it's largely undemocratic. Rather than Americans streaming to the polling places and casting their ballots for a presidential nominee, party bosses are given the exclusive privilege of elevating somebody from a measly candidate to the coveted nominee. Viewed another way, think of superdelegates voting and pledged delegates (those who are required to follow the results of their respective states) being left out in the cold.  Bernie Sanders would be livid, and ordinary Americans would find the entire process smelling of elitism.  And they would be right: if a nominee dies or is forced out for one reason or another, the Democratic Party’s next nominee will have been a creature of the establishment. One can only imagine Bernie Sanders supporters screaming at the top of their lungs about the grassroots being completely marginalized in favor of a safe, electable choice.

Whether you are for or against Hillary Clinton, Americans of all political persuasions should hope that the DNC never has to go through the job of plucking another alternative candidate out of thin air and voting him or her in on short-notice. Donald Trump will no doubt get a kick out of it, but American democracy — where millions of Americans are fully engaged in voting for the individual they would like to represent them in the general election — will have lost out.

Daniel R. DePetris, a fellow at Defense Priorities, has written for CNN.com, Small Wars Journal and the Diplomat.