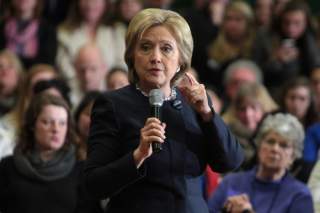 One especially disturbing trend in global affairs is the marked deterioration in relations between the United States and Russia. Much will depend on the outcome of the upcoming U.S. presidential election. Donald Trump has staked out a reasonably conciliatory policy toward Moscow. And in the highly improbable event that Libertarian Party nominee Gary Johnson emerged victorious, the United States would certainly pursue a less interventionist, confrontational foreign policy toward Russia as well as other countries.

But Trump and a handful of other dissenters have triggered the wrath of the foreign-policy establishment by daring to suggest that Washington’s Russia policy may be unwise and that the two countries have important mutual interests. Most anti-Russian hawks are backing Hillary Clinton, and the implications of a Clinton victory are extremely ominous. When Russia annexed Crimea, Clinton compared Russian president Vladimir Putin to Adolf Hitler—a comparison so extreme that it drew dissents even from some usual supporters. Yet there is no doubt that she would take a very hard line toward Moscow. Among other things, Clinton recommended that the United States impose a no-fly zone in Syria despite the risk that it could mean shooting down Russian military aircraft that were operating at the request of the Syrian government. Anyone who is that reckless is not likely to retreat from confrontations in eastern Europe or other arenas. Indeed, she has already called for not only more financial assistance but more military aid to Ukraine.

Even though Russia is now a weakened conventional power exhibiting little more than regional ambitions, rather than a malignantly expansionist totalitarian state with global ambitions, the bulk of the U.S. foreign policy establishment treats Moscow as though little has changed since the days of Leonid Brezhnev, if not Joseph Stalin. Yet Russia, with 142 million people, has less than 60 percent of the population of the old Soviet Union—and it is an aging population. The Russian economy is likewise much smaller (only $1.3 trillion). That is around one-tenth the size of the U.S. economy. Moreover, Russia’s economy is both fragile and one-dimensional, with a heavy dependence on energy exports.

In short, Russia does not have the features one usually finds in an aggressively revisionist power in the international system. Nevertheless, Russophobes have viewed Moscow’s annexation of Crimea and its support for pro-Russian separatists in eastern Ukraine as the harbinger of much wider aggression, when there is almost no evidence of such an agenda. A more plausible interpretation is that those moves were an effort by Putin’s government to strengthen a modest security zone along Russia’s western border against what Russian leaders see as NATO’s increasingly menacing eastward incursions. Efforts by the United States and its allies to undermine Ukraine’s pro-Russian government and back the successful efforts of street demonstrators to replace it with a pro-Western regime likely intensified Moscow’s suspicions.

Instead of responding, as the United States and its NATO allies have done, with provocative military exercises and new military deployments in eastern Europe, they should back away and accept a limited Russian sphere of influence in that region. Unfortunately, Western, especially American, leaders steadfastly refuse to do so. It has been a case of bipartisan stubbornness in American policy circles. Both Condoleezza Rice, George W. Bush’s secretary of state, and John Kerry, Barack Obama’s, sharply condemned Russia for taking military action against recalcitrant neighbors and explicitly rejected even the theoretical legitimacy of a sphere of influence, however modest. Clinton clearly shares that arrogant stance.

That attitude is profoundly unwise. Major powers typically insist on preeminence in their immediate neighborhoods, and we should not expect Russia to be an exception. After all, with its proclamation of the Monroe Doctrine, the United States declared the entire Western Hemisphere to be within its sphere of influence. Moreover, U.S. and Russian interests on a variety of important issues, including counterterrorism, coincide more than they conflict—a point that Trump correctly emphasized in his most recent foreign-policy address. Consequently, maintaining cooperative relations with Moscow makes good strategic sense. It also would be the height of bitter irony if, having escaped a direct military clash with the Soviet Union (a truly dangerous adversary) during the Cold War, the United States stumbled into conflict with a mundane Russia because of a needlessly inflexible and confrontational approach. Yet that is now a real danger unless U.S. policy becomes more accommodating.

Unfortunately, given the growing probability of a Clinton victory in November, U.S.-Russian relations, already in bad shape, are likely to deteriorate further. The two countries have been teetering on the precipice of a second Cold War for several years. The danger is that they will now slip into that dark abyss—or plunge into something even worse, an armed conflict with nuclear implications.