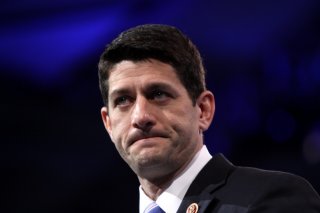 Last week, Paul Ryan released the House Republicans' plan for “Achieving U.S. Security through Leadership & Liberty.” My fellow contributors Ted Galen Carpenter, Daniel Davis and Jacob Heilbrunn, editor of The National Interest, have all scrutinized elements of the document and found it wanting.

I was most interested to see how the paper would handle the problem of defeating Islamist terrorism, especially after the worst terrorist attack on U.S. soil since 9/11. The paper talks mostly about taking the fight to the terrorists themselves, and denying them sanctuary to plan and recruit. It decries the “global whack-a-mole” approach, and scorns picking off terrorist leaders one by one as “an ad hoc, reactive policy [that] will fail.” Terrorists must be fought on the ground, ideally by “regional leaders” and “indigenous forces”, but such a coalition cannot succeed without “American leadership.” “To get others to join us,” the GOP’s task force on national security explains, “the United States must lead the charge. When America is absent, our partners step back and our adversaries step up, worsening the threats we face.”

It’s all fairly predictable rhetoric. But the missing ingredient in the GOP’s plan for winning the war against Islamist terror is the American people’s political will to sustain its grandiose plans to reshape the world’s global politics.

Terrorists thrive on lawlessness, and they exploit political and religious grievances. Once extremist groups are defeated on the ground, foreign governments face the crucial task of keeping them at bay by establishing security, building inclusive political systems and growing their economies to create jobs. We should assist such efforts when it is in our interests, recognizing that the stability of foreign countries is critical to the security of our own.

We’ve heard this many times since 9/11. It’s nation building all over again on an even grander scale. It’s as though Paul Ryan and other House Republican leaders are utterly oblivious to the experiences of the past fifteen years. In particular, the report ignores the sharp disconnect between such grand ambitions and what the public is willing to sacrifice to achieve them. That gap explains why similar approaches by two successive U.S. presidents have come up short.

In January 2007, George W. Bush announced that he would be sending additional troops into Iraq. Bush’s “New Way Forward”—i.e. the surge—is often characterized as a bold decision by a committed leader who was willing to suffer the consequences for what he believed was right.

That’s debatable. Bush’s own political future was not yet at stake. Moreover, he avoided direct confrontation with the public’s “get out now” sentiment by claiming that the additional U.S. troops would be in Iraq only long enough to establish security and create opportunities for political reconciliation. Bush assured the American people that such reconciliation was possible because “Prime Minister [Nouri al-] Maliki has pledged that political or sectarian interference will not be tolerated.” Bush also stressed “that America's commitment is not open-ended. If the Iraqi government does not follow through on its promises, it will lose the support of the American people. And it will lose the support of the Iraqi people.”

Those who supported the surge claim that it succeeded, that Iraq was on the path toward political reconciliation and that it would have reached that magical place if only Barack Obama had committed to leaving U.S. troops in the country.

Such claims, however, directly contradict Bush’s stated goals at the outset—the surge was never intended to serve as a justification for an open-ended U.S. troop presence in Iraq. On the contrary, it was sold to the American people as a means to end the war in Iraq. Competing proposals, including a phased troop withdrawal from Iraq, Bush explained, “would force a collapse of the Iraqi government, tear that country apart, and result in mass killings on an unimaginable scale.”

“Such a scenario,” he continued, “would result in our troops being forced to stay in Iraq even longer.”

Instead, Bush explained: “If we increase our support at this crucial moment, and help the Iraqis break the current cycle of violence, we can hasten the day our troops begin coming home.”

Increasing the number of troops in Iraq on a temporary basis was supposed to accomplish that feat, but the number of additional troops were never more than thirty thousand, most of whom were concentrated in Baghdad. In short, the resources that Bush was prepared to apply to the problem, including the amount of time that he expected U.S. troops to remain in Iraq, was utterly inadequate to the task at hand—fashioning a durable political order in Iraq.

ISIS revealed the fragility of this political order. The self-proclaimed caliphate has capitalized on predominantly Sunni disenchantment toward the now-Shiite dominated central government in Baghdad. It used often grotesque violence to both intimidate potential foes and recruit new followers and copycats, including, apparently, a twenty-nine-year old, New York-born son of Afghan immigrants.

In short, public sentiment compelled Bush to attempt nation-building on the cheap. And, unsurprisingly, it failed.

Obama attempted a similar sleight of hand with his own surge in Afghanistan in 2009, and that also failed. No amount of hard fighting will make a bit of difference in the long run so long as the Afghan government lacks legitimacy in the eyes of the Afghan people. The strategy that Obama adopted hinged on building host-nation capacity, but U.S. troops couldn’t bridge the capacity gap, and certainly not in the time period that Obama assessed that the American people would tolerate.

Establishing political legitimacy takes time, and often entails violence on a massive scale. Building a new political order typically involves prying weapons out of the cold, dead hands of those who preferred the old political order. The third-party actors tasked with helping the newly installed governments during the long transitionary period must be patient.

But sustaining interest is difficult. Flying over Afghanistan during one of his many visits there, Robert M. Gates looked down upon the dusty and desolate landscape and pondered “Why are people fighting over this godforsaken place?”

The Afghans had their reasons. But Americans had to be convinced that the place was worth fighting over. Decimating Al Qaeda was one thing. Building an inclusive political system that ensured that Al Qaeda and Taliban allies never returned was a bridge too far.

The House Republican’s report is merely the latest sign that that message hasn’t yet penetrated inside the Beltway. Rather than crafting a strategy for containing the threat of terrorism, Washington remains committed to a quixotic strategy of eradicating it.