How America Could End Up in an Unexpected War with China 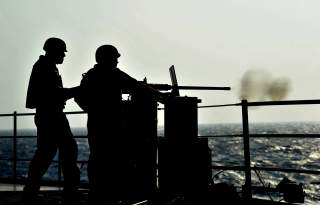 Three decades ago the People’s Republic of China was an economic backwater. Today the PRC sports the world’s second-largest economy. Shanghai most dramatically illustrates the country’s transformation. The city is filled with stylish office buildings, five-star hotels, luxury stores and foreign visitors.

Reflecting their success, the Chinese are increasingly confident as well. If not yet a great power, the PRC seems destined to eventually share global leadership with the United States. And its people know that.

Which means future U.S.-China relations could be rocky.

Ties turned confrontational under the Obama administration, which announced a “pivot” or “rebalance” to Asia. Washington officials unconvincingly claimed that the policy was not directed against Beijing. The Chinese may be many things, but they are not stupid.

Candidate Donald Trump sounded like he intended to pursue an even more truculent course, upgrading relations with Taiwan, launching a trade war, blockading Chinese possessions in the South China Sea and pressuring the PRC to “solve” the North Korea problem. But then came the bilateral summit and the president’s one-way love-fest with Chinese president Xi Jinping. All suddenly became sweet and light in Trumpland.

However, in the long-term the president’s pleasant words backed by an offer of unspecified trade concessions won’t go far in buffering relations between a unipower determined to preserve its dominance and a rising power equally determined to assert itself. First, the Trump administration yielded Pacific economic leadership to the PRC. Beijing is likely to find new commercial opportunities, limiting Washington’s ability to do trade harm.

Second, nationalist passions are not easily cooled. The issue is not just a few obstreperous officials who don’t know their country’s proper place. The real challenge is posed by a population that believes in a much greater China.

So far North Korea has dominated discussions between the two governments. Even if cooperative efforts fail, any damage to the bilateral relationship likely will be contained. At most, application of secondary sanctions against Chinese financial institutions would lead to economic turbulence, not military confrontation.

Territorial disputes throughout the Asian-Pacific region pose a far tougher test. The Philippines’ unpredictable Rodrigo Duterte has been sparring with Beijing over Scarborough Reef. Tokyo has refused to even acknowledge a dispute over the status of the Senkaku Islands. But that has not prevented China from using air and naval patrols to challenge Japan’s claim.

America’s primary interest is navigational freedom, which so far the PRC has not attempted to impede. Washington has no territorial claims in the region. But both Manilla and Tokyo are treaty allies, their security guaranteed by America, which means any confrontation between them and China could draw in the United States. At his confirmation hearing Secretary of State Rex Tillerson suggested an even more active American role, barring PRC access to its claimed possessions. That would set up a clash at sea, guaranteeing a naval arms race and creating a trigger for war.

As pleasant memories from the Mar-a-Lago summit fade, deep disagreements likely will reappear. And the Chinese aren’t likely to back down. For the United States, dominance of a region so far from home is a convenience, an added benefit to America’s almost absolute security in its own hemisphere. For the PRC, preventing Washington’s encroachments along its border is a “core” interest, similar to what Americans have essentially claimed for their entire hemisphere for two centuries.

Last weekend I attended a conference on maritime issues in Shanghai. Participants were largely academic and policy, not political. However, the Chinese interlocutors were in no mood to compromise. They defended their government’s claims, advocated active measures to assert them, and disdained criticism of Chinese aggressiveness. No one wanted war, but none of them recommended that their nation back down if Washington chose confrontation.

Indeed, the participants well demonstrated the disparity of interest and intensity which disadvantages America. No one doubts that the U.S. possesses the stronger military. Nor is there any question that Washington would use its superior power if necessary to defend important interests closer to home.

But it would be far harder for America to use force to ensure its control of the waters along China’s borders and oversight of territorial disputes in which America has no serious stake—who gets to raise their flag over one or another set of barren rocks. And the price of doing so will only rise. It costs the PRC far less to threaten a U.S. carrier than it costs America to protect one. Just how much are Americans prepared to spend to assert what amounts to the convenience of empire rather than essentials of security?

Moreover, at a time when North Korea tops Washington’s Asian agenda, how much is the Trump administration willing to pay for Beijing’s assistance? According to President Trump, President Xi already has emphasized the limitations of China’s control. The PRC can hardly be expected to dismantle its one military ally if the United States is actively pushing military containment elsewhere in the region.

Indeed, while Americans tend to view themselves as being Vestal Virgins, attempting to do good in an evil world, citizens of other nations typically take a more cynical view. In Shanghai, as elsewhere, they see Washington speaking of principle while promoting interest, and refusing to apply to itself norms it seeks to impose on others. The Chinese are prepared to yield before superior force, but are not prepared to concede that America always will possess that edge.

Washington officials should reconsider their approach to China. Military confrontation would be a losing game. No victory would be permanent. An American success would be an invitation for the PRC to rebuild and expand its armed forces for a rematch. And conflict would aid the authoritarian regime in maintaining and expanding its control. A liberal, democratic China would be unlikely to emerge from any war.

The U.S. needs to prioritize its objectives vis-à-vis China. Washington wants Beijing to democratize, respect human rights, reduce trade and investment barriers, forswear cyberattacks, pressure North Korea, sanction other pariah regimes, abandon territorial claims, and accept permanent U.S. hegemony. No serious state, let alone a nationalistic rising power, could concede such a laundry list. American officials should decide what they most want and how much they are willing to pay.

Washington also should recalculate what is worth defending. For instance, there is a difference between preserving Tokyo’s and Manila’s control over territories contested by China and the two nations’ independence, which Beijing does not threaten. Indeed, while resolute backing of the former might deter China from acting, it also would ensure Washington’s involvement should an errant sea captain on one side or the other start shooting. Moreover, issuing blank defense checks would encourage friends to be more intransigent and prepare less for trouble.

Most important, American officials need to separate the objectives of defending America and containing China. The former is relatively easy and inexpensive. It is likely to be long into the future before the PRC is capable of projecting power against America’s Pacific possessions, let alone the homeland.

In contrast, it will grow ever more expensive for the United States to overcome the far more modest PRC build up necessary to deter outside intervention. How much are Americans prepared to spend to ensure that Washington can contest Chinese influence along China’s borders? The issue is not whether doing so has value. The issue is whether a highly indebted liberal republic can afford to continue doing so, especially when that responsibility more appropriately falls on other nations in the region.

Even after the ongoing campaign against Western influence, the PRC remains a far more open society than in the early days of the Communist revolution. Hope that political liberalization would follow economic liberalization has been stillborn, but Xi Jinping’s China remains very different from Mao Zedong’s China.

As such, the PRC might not be an ally, but there is no reason it should be an enemy. Yet attempting to dominate and contain China risks turning it into an angry and well-armed adversary. Instead, Washington should prepare to share global leadership. Far better to yield thoughtfully while shaping the future than to be forced to concede even more under pressure. Just as Great Britain successfully—if not always happily—accommodated the emerging United States of America.