How America and North Korea Could Start a Nuclear War 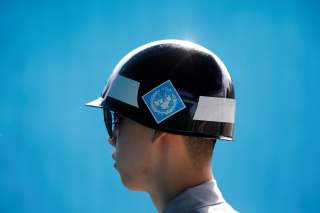 The Cold War was marked by hysteria over the potential for nuclear conflict. School kids practiced getting under their desks and families built bomb shelters in case the missiles fell. Although there were moments of acute danger, most notably the Cuban Missile Crisis, the world seemed to enter a new age when the Soviet Union collapsed. Small wars continued, but the famed nuclear doomsday clock finally moved backwards.

Yet the possibility of nuclear war again is dominating international headlines. A foreign government is building nuclear weapons and ICBMs to target the United States. And the president of the United States is now threatening to destroy that nation. People have begun to share their parents’ fear of nuclear warheads raining down upon American cities.

Fear-mongering is hardly new in American politics. But President Donald Trump’s decision to match North Korean supreme leader Kim Jong-un insult for insult and threat for threat creates a serious risk of misjudgment and mistake. Neither the United States nor the Democratic People’s Republic of Korea desires war, but the spectacle of the two nations’ leaders behaving like participants in a cockfight demonstrates that these are unusual times.

Most analysts who know the Korean Peninsula realize that war is not an option, at least absent a well-grounded belief that conflict truly is inevitable and the only question is how it starts and is conducted. There are some—Sen. Lindsey Graham comes to mind—who suggest that a Second Korean War wouldn’t be such a big deal because it would not be “over here.” Of course, the U.S. military would be involved in any fight and the North probably has the capability to hit American bases in the region.

Even if Pyongyang currently lacks the ability to hit the U.S. mainland, it could let loose murder and mayhem on South Korean and Japanese territory. Too bad the senator doesn’t believe those lives count for much. Most war games discount claims of North Korean forbearance or an otherwise easy victory. Casualties surely would be at least in the tens of thousands and perhaps many, many more. And if the conflict’s impact flowed over the North’s borders into China and Russia, Washington would face additional significant geopolitical dangers.

Yet some analysts—as well as politicians like Graham—appear to believe that the only choice is war or living with a dire and growing North Korean nuclear threat against the American homeland. In which case war, especially if it could be kept “over there,” would be preferred.

Those might appear to be the only choices because the United States insists on remaining militarily entangled in Northeast Asia. However, it is Washington’s commitment to South Korea which has brought America into potential conflict with the Democratic People’s Republic of Korea. So long as the United States intervenes militarily to protect the South from the North, the latter must prepare to offset Washington’s overwhelming military might, which makes nuclear-tipped ICBMs the obvious weapon of choice.

However, nothing requires Americans to remain forever on station in the Republic of Korea. The ROK was a wreck in July 1953 when the armistice was signed. South Korea trailed its northern adversary in economic strength and political stability until the 1960s. But over time Seoul lived up to the Biblical promise that the last would be first. Today the South vastly outranges the DPRK, enjoying a 45-to-1 economic edge and 2-to-1 population advantage. Long ago South Korea gained the ability to field a military capable of deterring the North and defeating the latter’s forces if deterrence fails.

Maintaining the unnecessary “mutual” defense treaty with the ROK is what makes America a potential North Korean nuclear target. Without the Cold War context, South Korea no longer matters significantly to U.S. security. A renewed Korean conflict would be a humanitarian tragedy and highly disruptive to Asia, but neither of those problems warrant either triggering a conflagration on the peninsula or making America’s homeland a nuclear target.

Of course, the problem of South Korea defending itself against a North armed with nuclear weapons would remain. Yet that represents a more general problem of Washington’s tendency to promiscuously hand out nuclear umbrellas as well as conventional guarantees. It isn’t in America’s interest to risk Los Angeles, Honolulu, Seattle, Phoenix, and perhaps a host of other cities to defend Seoul—or, frankly, Tokyo, Taipei, and Canberra.

This suggests that Pyongyang’s acquisition of a nuclear arsenal is an appropriate time to consider encouraging nations threatened by the North, most obviously meaning the ROK and Japan, to develop countervailing deterrents. Seoul started down the nuclear path a half century ago before being forced to halt by U.S. pressure. Although President Moon Jae-in opposes the idea, a range of officials, politicians and commentators back a South Korean bomb.

That would force Japanese policymakers and people to consider doing the same to confront growing challenges from the North and People’s Republic of China. The opposition to nuclearization would be stronger in Japan than in the ROK, but Tokyo could no longer rely on Americans performing the most important function of government everywhere, providing for the nation’s security.

More important, if Washington allowed China to share the nightmare created by North Korea’s nuclear developments, Beijing might feel forced to do more to constrain the North’s nuclear ambitions. The possibility of America’s friends going nuclear might energize the Xi government.

In any case, the United States would escape either war or the nuclear-threat conundrum. There is no reason to believe Kim Jong-un, however brutal, is suicidal. The North seeks to avoid American involvement, not trigger it. Stepping back militarily and allowing prosperous and populous states to take over their own defense surely is better than starting the very war Washington has spent sixty-four years attempting to prevent. And it would seem to be a lot better than risking nuclear strikes on the American homeland if that war nevertheless erupted.

North Korea is the land of second best solutions, it has been said. But war is far worse than second best. And turning the United States into a nuclear target is scarcely better. Policymakers should reconsider Washington’s current strategy, which needlessly risks the lives, wealth and security of Americans for the interests of other nations.