How Bad Is Trump’s Brand of Authoritarianism? 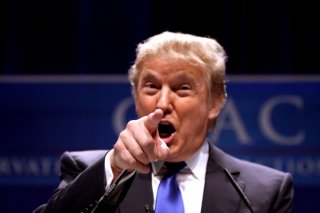 Oftentimes, American foreign policy elites see public sentiment as irrelevant, because it can be shaped, stretched and molded like silly putty in the hands of an effective leader.

Others advise leaders to ignore public opinion entirely. Even in the face of strong opposition to particular foreign policies—say, for example, sending large numbers of U.S. combat troops into the middle of one or more of the civil wars currently raging in the Middle East—pollster Jeremy Rosner predicted that Obama and his successors “will find that if they take strong actions abroad that advance America’s national security interests, even an inward-focused public will provide the latitude they need to act.”

Though I disagree with this advice, Rosner isn’t incorrect. The public tends to defer to a president’s judgment on national security, a function of rally-around-the-flagism and information asymmetry. On domestic policy, from the economy to taxes to health care, the average voter can assess whether something is working, at least for him or her (I have a job. Good. My taxes went up. Bad. I can’t find a doctor. Bad).

It is more difficult to assess if a particular foreign policy has the same impact on their daily lives, and U.S. leaders have far more power to shape public attitudes on foreign policy than on domestic policy. Aside from a tiny fraction of the U.S. population serving in the military, and the far smaller contingent comprising our diplomatic corps, very few Americans are directly affected by what the U.S. government does abroad.

Even if that seems to be the case, the average American rarely perceives it that way. Anyone suggesting that U.S. actions abroad might explain even a small share of the resentment and hatred that distant peoples feel towards the United States is ignored, or ridiculed. The true cost of U.S. policy is concealed from the people who are paying for them. For the most part, U.S. leaders do what they want, and the public agrees.

But some alert commentators understand that particularly effective leaders can mold the public in ways that they, the elites, don’t appreciate. For example, Robert Kagan warns that Donald Trump “has tapped into. . . what the founders most feared when they established the democratic republic: the popular passions unleashed, the ‘mobocracy.’” Kagan continues:

“This phenomenon has arisen in other democratic and quasi-democratic countries over the past century, and it has generally been called ‘fascism.’ . . . Successful fascism was not about policies but about the strongman, the leader (Il Duce, Der Führer), in whom could be entrusted the fate of the nation. Whatever the problem, he could fix it. Whatever the threat, internal or external, he could vanquish it, and it was unnecessary for him to explain how. . . .

These movements play on all the fears, vanities, ambitions and insecurities that make up the human psyche. . . . A mass political movement is thus a powerful and. . . frightening weapon. When controlled and directed by a single leader, it can be aimed at whomever the leader chooses. (emphasis added)

About that “whomever.” Kagan is understandably worried that Trump would aim his power at Beltway elites, the class of people that he has repeatedly attacked over the course of his campaign. But elsewhere Kagan has implored U.S. policymakers to lead, to convince the American people to support projects that the elite favors, but that might be unpopular, at least at the outset. He has even engaged in blatant fearmongering to make his case. Kagan would celebrate the prospect of a mass political movement if it was mobilized and led by a single skillful (or merely cynical) leader willing to aim his vast power at establishing, for example, “benevolent global hegemony.” And what if such a leader committed to “extending American power” globally, and convinced the American people to “accept their role as upholder and defender of the liberal world order”? Kagan is fine with that, too, as Daniel Davis explained on the Skeptics blog. It could be said that Trump isn't so much shaping public attitudes as channeling them. This also offends elites who believe that a leader's job is to give Americans the policies they need, not the policies they want. (Of course, the assumption that the elites know what the public needs is what makes them elites.)

But Trump isn't merely responding to voter sentiment; he is shaping it in pernicious ways. As Kagan correctly notes, Trump caters to the public's darkest, ugliest instincts—especially xenophobic instincts—and then exploits these fears to whip up support.

Indeed, the issues often seem secondary, or maybe even irrelevant. Trump has changed his positions on matters of consequence—explaining away his past support for abortion rights or gun control, with a wave of his hands—and suffered no obvious consequences, which is why he can't be trusted any more than the elites. In the elites' case, a few tell the many what they need. In Trump's case, one man performs that function. And given that his views are often contradictory, usually uninformed and connected by no common philosophical thread, or reflecting a coherent theory of international relations, we have no basis for assessing whether his foreign policies, in practice, will be all that different from the elites that he so often scorns.

In short, Kagan is right to be concerned about Trump’s authoritarianism, and about the authoritarians who support him. Kagan evinces no such qualms, however, when such power is turned to ends that he favors. That suggests that he isn’t really that worried about authoritarianism, per se, but rather merely Trump’s brand of it.