How Bush's Bad Idea that Turkey Could Join the EU Bombed 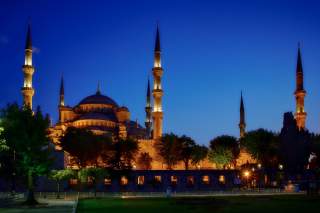 It was 2004, and the geopolitical chess pieces were positioned very differently from how they are today. Back then, Turkey wanted to join the European Union, Great Britain thought that that was a magnificent idea and France was skeptical. Oddest of all, the most vocal advocacy for Turkish accession and democratic reform came from an unlikely alliance of then-president George W. Bush and then-prime minister Recep Tayyip Erdogan. An Associated Press photo from 2002 shows the two of them sitting together, grinning for the camera, with the former’s hair and the latter’s mustache having yet to gray.

Bush’s support for Turkey had precedent. American presidents have historically backed EU enlargements, viewing a stronger Europe as strategically preferable. Clinton-era diplomats had also been receptive to Ankara’s ambitions, helping Turkey secure status as a candidate for membership at the Helsinki Summit in 1999. But the forcefulness of Bush’s advocacy was surprising: “We join you side-by-side in your desire to become a member of the European Union,” he declared while sitting next to Erdogan in 2002.

Two years later, he was even more explicit, asserting in Istanbul that “as a European power, Turkey belongs in the European Union,” and comparing the geopolitical line between the two entities to the division of Germany at Yalta. Bush’s tone ruffled French President Jacques Chirac’s feathers, whose stance on Turkish membership was lukewarm to begin with, who groused that “not only did [Bush] go too far, but he went into territory that isn’t his.” He fussed: “it was a bit as if I were to tell Americans how they should handle their relationship with Mexico.” But Bush was never one to be swayed by Chirac, and in 2006, a year after Turkey’s accession talks with the EU began, the former again encouraged admission.

There were several reasons for America to prefer a Turkey inside the EU. Strategically, the White House wanted Turkey fully behind its Iraq policy, a request Ankara shrewdly tethered to its EU accession. Economically, membership would ensure stability for the Baku-Tbilisi-Ceyhan pipeline, which transports oil out of the Caspian Sea and terminates in Turkey. Politically, Turkey was home of Ataturk, burial ground of the last recognized caliphate, a rare secular democracy in a Middle East gripped by dictatorships.

It’s that last one that likely intrigued Bush. When it came to geopolitics, the forty-third president was a big-picture thinker who disdained what he called “mini-ball” and preferred boldfaced words to fine print: a democracy in the Muslim world joining up with Europe would advance the cause of freedom. Smaller issues, and even somewhat larger ones like Turkey’s refusal to recognize EU member Cyprus, were squashed in his mind by enduring and abstract concepts. Bush also wanted to short-circuit the narrative that the war on terror was a religious crusade against Islam. Accordingly, he contended that Turkish accession would “expose the ‘clash of civilizations’ as a passing myth of history.”

To Bush, the great ideological tug-of-war in the Middle East was between the democratic West and the dark theocracies favored by Islamists, and he was determined that the former win out so Muslims could be free. To usher Turkey into the EU, to claim it for the good guys, would have been a heady moral victory. Bush never accounted for a potential authoritarian reversion in Turkey; he certainly never imagined the EU could be seen as anything less than democratic. His perception was enhanced by Ankara, which did a lot during this period to allay Western suspicions over its history of coups. For example, passed a suite of reform packages that diminished the military’s power.

Alas, a lot changed 2004: the Iraq war went south, Syria was immersed in chaos, refugees flooded into Europe, Germany throttled Greece with failed economic reforms, discontent with the EU spread, Britain voted for Brexit, Erdogan took a sudden dictatorial plunge and tens of thousands in Turkey were detained after a coup attempt. Bush’s idealistic hopes were crashed on the shoals of reality.

Meanwhile, Turkish negotiations with the EU have been mired for over a decade. The impedimental Cyprus issue still remains unresolved, and the Cypriots have vetoed several of the requisite accession chapters. While Turkey once sought to meet EU standards, today the EU is scrambling to appease Turkey so an agreement on the migrant crisis doesn’t get scrapped. Ankara is threatening to pull out of talks unless it’s granted visa-free travel within the Schengen Area—which would play into the hands of European nationalists, which could weaken the EU even further. Turkish membership has also grown unpopular; in Britain, it was a potent issue for the successful Leave campaign.

Surely this isn’t what George W. Bush had in mind. Today, the prospects for a European Turkey appear bleaker than ever. The chessboard is almost unrecognizable.