How Donald Trump Can Avoid Playing into North Korea's Hands 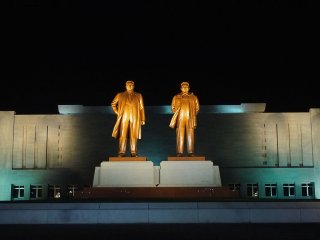 A new U.S. administration has taken office, so a new provocation has been staged by Pyongyang. Predictably, America and its allies have denounced North Korea for defying the “international community.” And Washington is filled with chatter about the need to do something to demonstrate resolve and leadership.

It’s a foolish game that the North enjoys. Why do U.S. officials continue to play?

The Democratic People’s Republic of Korea has spent most of its nearly seventy years acting as the outsider. Even during the Cold War it played the Soviet Union and People’s Republic of China against each other. Today the DPRK and Beijing are more frenemies than allies.

Thus, it should come as no surprise that Pyongyang has little respect for the so-called international community, a meaningless construct used to back whatever position the speaker happens to hold. Rushing to the UN Security Council to discuss the supposedly grave threat to world peace will be of no use. After all, even the United States treats the judgment of that supposedly hallowed body as a matter of convenience—useful when backing American policy, as in the case of North Korea, but of no consequence when at odds with Washington’s approach, such as the invasion of Iraq.

Worse, the DPRK thrives on the wailing and gnashing of teeth that its misbehavior inevitably provokes. To the extent that the North desires international attention and hopes to acquire leverage against its antagonists—most notably South Korea, Japan and the United States—such an adverse reaction is gratifying. Having far away Europe complain about the threat to world peace is a pleasant extra, like a glass of cognac after a fine meal. What other nation otherwise of no account is able to win such notice around the globe?

But the biggest problem is Washington’s determination to demonstrate its impotence. Precisely what will the Trump administration do in response? What can it do in response?

America faces the same unpalatable choices as usual. Military strikes would be a dangerous gamble, based on the hope that Pyongyang would not retaliate and trigger the very conflict Washington has helped deter for more than six decades.

UN sanctions were twice enhanced last year after nuclear tests, only after painful negotiations with China, and have had no evident effect on North Korean behavior. The next step would be to target Chinese entities dealing with the North, which would further strain relations with the PRC. That would almost certainly make Beijing less willing to cooperate with a U.S. administration already seen as both hostile and unpredictable.

Finally, there’s negotiation. The president suggested the possibility during the campaign, but Pyongyang is unlikely to disarm, especially after seeing the United States and Europe seize their opportunity to oust Libya’s Muammar el-Qaddafi after he gave up his nuclear and missile programs.

Moreover, even if the DPRK were inclined to negotiate seriously, Washington has, in the past, refused to put on the table incentives of sufficient interest to Pyongyang, including a peace treaty, diplomatic recognition and troop withdrawals. Kim Jong-un appears more interested than his predecessors in spurring economic development, but he seems no less committed to acquiring a nuclear arsenal and missile force.

In which case U.S. officials would do better simply shutting up for a change. Better to downplay the DPRK’s latest actions and consider revising policy toward Pyongyang.

No doubt, North Korea’s emergence as a potentially significant military power is undesirable. But it is a reality. The North’s nuclear and missile programs can’t be wished away. What to do?

First, recognize that the DPRK does not threaten America. Kim Jong-un may be evil, but he is not stupid. The regime won’t attack the United States, which would result in North Korea’s destruction. Rather, Pyongyang desires to deter Washington from attacking it, whether to achieve regime change or back the South in a Korean conflict. To the extent that North Korea’s weapons might be used against American bases in Asia or the U.S. homeland, it is only because Washington has chosen to remain militarily entangled in the peninsula. Otherwise, the DPRK would have no interest in America.

Second, there’s no cause for a continued U.S. security commitment or force presence in the South. The ROK far outstrips its northern antagonist in every measure of national power, except military, and that’s out of choice, not necessity. South Korea should take over responsibility for its own defense. America can ill afford to forever subsidize prosperous and populous allies.

Third, Washington needs to contemplate what policy to adopt in response to a nuclear North. The United States could continue to maintain a so-called nuclear umbrella over the South. On the other hand, that creates the possibility, however slight, of U.S. involvement in a nuclear exchange over interests that are modest at best. Rather than risk American cities to protect Seoul, it might be better for the ROK to develop a countervailing deterrent. Indeed, that possibility (which could lead to a Japanese bomb) might be the shock necessary to induce greater Chinese pressure on North Korea.

Fourth, the United States needs to persuade the PRC to do more. And that means addressing Beijing’s interests—its fear of the impact of a North Korean collapse and resulting reunification that strengthens an American containment strategy against China. The PRC won’t act against its own interests. Washington needs to make Chinese cooperation worth Beijing’s while.

Fifth, the United States should engage North Korea. That doesn’t mean liking the regime, endorsing Kim Jong-un’s rule or ignoring human-rights violations. However, Washington routinely maintains diplomatic relations with adversaries, including the Soviet Union. The fact that the USSR posed a severe military threat to America made such contact even more important.

Refusing to exchange diplomats makes no sense. Regular if modest contact, at least, would offer a small window into North Korea. Moreover, Washington needs to manage Pyongyang’s threat perception. The DPRK has several reasons for wanting to build missiles and nukes, but the most persuasive is defense: how else to deter the hostile global superpower from using its vast military?

Beijing long has insisted that Washington needs to improve relations with the North as the basis for denuclearizing the peninsula. Only by making such an effort is the United States likely to secure greater Chinese cooperation. Indeed, there would be no better evidence of North Korea’s malign intent than to make an attractive offer to Pyongyang, only for it to be ignored or rejected.

If the DPRK is the gravest security threat facing America, as some have claimed, that demonstrates just how secure the United States is. Today the North is able to attack only those forces Washington chooses to put in harm’s way. And it is only because the United States does so that North Korea has any incentive to attack. Finally, Pyongyang would target those forces only as a last resort, in response to a U.S. intervention against the North.

The best U.S. strategy would be to exercise “leadership,” but of a responsible sort. Washington should downplay the threat, step back militarily, offer China incentives to step forward and engage Pyongyang. The status quo hasn’t worked. It’s time to try a new approach.