How to End U.S. Strategic Failure in the Middle East 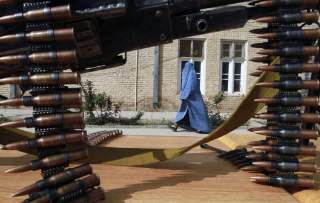 While most of the country has been fixated on issues surrounding the North Korean nuclear crisis, other foreign-policy issues of real importance have been passing unnoticed—and are moving in the wrong direction. U.S. military decisions in Afghanistan, Iraq and Syria threaten to extend our near-unbroken record of earning strategic failure well into the future.

In Afghanistan, Vice President Pence just returned from a trip to Kabul in which he said the U.S. Armed Forces “are here to see this through.” Yet as should be obvious, regardless of how many more bombs the United States drops there, approximately fifteen thousand U.S. troops are not going to bring a military victory that one hundred thousand failed to attain.

The current number of troops is enough to prevent the government in Kabul from falling, but nothing beyond that. Without change, the Trump administration’s new plan will simply add four more years to the strategic futility that we’ve endured since 2001.

Defense Secretary James Mattis said that although coalition forces had liberated all ISIS areas from Iraq, they still remain “a threat to stability in the recently liberated areas,” and thus he plans to keep U.S. forces in Iraq indefinitely. Commander of U.S. CENTCOM, Gen. Joseph Votel, said that U.S. forces would remain in Syria indefinitely to help local Arab and Kurdish border militia “prevent resurgence of ISIS and will help bring control.”

As one who has served as a U.S. trainer to an Iraqi border battalion, I can tell you this training in areas of Syria governed only by various militia forces has virtually no chance of preventing the resurgence of anything, and even less of a chance of bringing control. Staying in Iraq, Syria and Afghanistan, despite the confident reassurance of a host of military and administration leaders, will neither bring stability there nor enhance U.S. security. The best way to shepherd U.S. resources, preserve the vitality of the U.S. Armed Forces, and end two decades of strategic failure is to successfully end the missions and redeploy U.S. military forces.

The United States is spending scores of billions annually, suffering the death and injury of dozens of its service members, and diverting the military’s training and focus away from preparing for potentially existential fights against capable adversaries—in order to engage in operations that evidence and sober analysis clearly tells us are going to fail. To end this perpetual strategic failure, there are several things the administration must do.

First, Washington must set a reasonable timeframe, around twenty-four months, and inform Kabul and all allied nations that it is going to bring its military effort in Afghanistan to an end. The Afghan government will have two full years of military support at current levels to get its house in order and take whatever action is necessary to prepare for being fully responsible for its national security. After those two years we would, over the course of twelve months, conduct an orderly redeployment of all U.S. combat troops.

Secondly, the White House would order the Pentagon to withdraw all U.S. personnel and equipment from Syria, to be completed within ninety days of the order. Finally, the president would order the secretary of defense to present him with a plan to withdraw all U.S. military personnel from Iraq, to be completed six months from the date the order was given.

And let me immediately debunk the unsubstantiated notion that a U.S. military withdrawal would create a “vacuum” that America’s adversaries will leap to fill, and U.S. security will suffer as a result. First, it’s hard to imagine another global power will be eager to take our place engaging in perpetual and costly failure. Secondly, the chaos that currently afflicts the Middle East is not new. It was present during the entirety of President Reagan’s eight years in office, and it will be present after our withdrawal. Our presence does not minimize chaos; it might, however, serve to worsen it.

Here is the key takeaway: if the president fails to take these actions, each of the missions in Iraq, Syria and Afghanistan will continue foundering, without resolution, indefinitely, perpetuating a slow bleed of U.S. national treasure. It will, moreover, continue putting at risk America’s ability to respond to major regional contingencies, such as against North Korea or Russia.

We must recognize two decades of unambiguous evidence that our military operations in the Middle East and Afghanistan have purchased only strategic failure. The price of needlessly and willfully choosing to engage in military operations abroad whose outcome can only be strategic failure is far too high and must be jettisoned in favor of rational policies that benefit the country.