How to Guarantee a War with North Korea 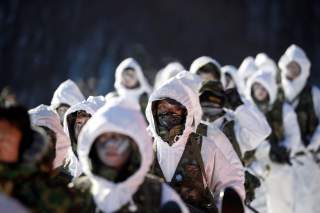 As tensions flare on the Korean Peninsula, concerns mount about North Korea’s nuclear- weapons capability. Secretary of Defense James Mattis recently stated that, contrary to rumors and alarmist media reports, Pyongyang does not yet pose a serious threat to the American homeland. The same cannot be said, however, for the U.S. troops stationed in South Korea and Japan. Those tripwire forces have become little more than nuclear hostages, well within range of North Korea’s current missile fleet. Keeping the troops in such a vulnerable location is foolhardy.

Ironically, their presence may even reduce the credibility of the U.S. security commitment to the East Asian allies—contrary to the conventional wisdom about the effect of such deployments. The rationale for stationing tripwire forces in both East Asia and Europe during the Cold War was that the move guaranteed U.S. involvement in any conflict that broke out. Christopher Layne, the Robert M. Gates Chair in Intelligence and National Security at Texas A&M University’s George Bush School of Government and Public Service, points out in his crucial history of the Cold War, Peace of Illusions, that U.S. allies repeatedly sought those deployments precisely for that purpose. Successive presidential administrations obliged, believing that the step was essential to reassure Washington’s security partners that America would never, indeed could never, renege on its promises. Once American military personnel died from an enemy offensive, it would be nearly impossible for a president to walk away from treaty obligations.

Most Americans were unaware of the decision to lock the United States into its commitments and deny policymakers the element of choice. Officials certainly did not inform the public about the implications of that approach. And the bulk of the news media also left the American people blissfully ignorant that the presence of tripwire forces on the front lines in dangerous arenas increased the risk that a conflict would escalate and, therefore, lead to catastrophe for the U.S. homeland. Attitudes toward Washington’s alliance commitments might have been quite different if the public had known about the danger flowing from those commitments and troop deployments.

Whatever the logic or wisdom of tripwires and the resulting denial of policy choice during the Cold War when the United States was attempting to deter the existential security threat that the rival superpower posed, the risk-benefit calculation should be far different today. Nowhere is the need more evident than in Korea. In the context of the Cold War, U.S. leaders would have viewed a North Korean attack on South Korea as the opening phase of a general communist offensive to shift the balance of power throughout East Asia. Both Moscow and Beijing regarded Pyongyang as an important strategic ally. Chinese officials even described the relationship with North Korea as being as close as “lips and teeth.” Soviet and PRC backing for an attempt by Pyongyang to unify the Korean Peninsula through force, thereby eliminating one U.S. ally and intimidating Japan, an even more important ally, was hardly a far-fetched notion. Indeed, both communist powers had supported North Korea’s invasion of the South in 1950.

The current situation is totally different. Both Moscow and Beijing maintain diplomatic ties with South Korea and (especially in China’s case) have lucrative economic ties as well. Neither Russia nor China wants Kim Jong-un’s regime to do anything reckless. Indeed, Beijing and Moscow repeatedly have urged both sides in the current confrontation to exercise caution and restraint.

Consequently, the U.S. defense commitment to South Korea (much less the stationing of American troops in that country), is no longer necessary to deter a wider security threat from rival great powers. Moreover, both South Korea and Japan now have the economic resources to build whatever military capabilities of their own they might need to deter or defeat North Korea. Pyongyang’s menace would normally be purely a sub-regional one that an upstart, third-rate power poses to its immediate neighbors. U.S. involvement—and especially the presence of tripwire forces—is what gives the current crisis wider import. The outbreak of a conflict on the Peninsula would put those forces at grave risk for modest intrinsic stakes to America.

Moreover, the probable effect of the U.S. tripwire in Northeast Asia today is more unpredictable than the role of such units played during the Cold War. Hostile great powers, such as the Soviet Union or China, probably were deterred from launching a war of aggression against a U.S. ally, knowing that, given the crucial interests at stake, Washington might have little choice but to respond and even escalate the conflict. But the vulnerability of forward-deployed U.S. military units also inhibited American leaders from taking rash actions that might trigger a conflict.

The latter point is especially pertinent regarding the current situation in Korea. Although the Trump administration insists that all policy options, including the use of force, are on the table to compel Pyongyang to abandon its nuclear and ballistic missile programs, launching a preventive war could doom thousands of tripwire personnel. Most of them are stationed near the Demilitarized Zone separating North and South Korea. Even a brilliantly executed air and naval strike on North Korea would probably not be able to prevent a sizable counterstrike that would do the most damage in the area along the DMZ and in the Seoul metropolitan area, located barely 50 kilometers from that line. And if any portion of the U.S. blitzkrieg failed, the possibility exists that nuclear-armed North Korean missiles could land on American bases in both South Korea and Japan. A reasonable appreciation of the potential danger logically would inhibit even the bold Trump national security team from launching a preventive war.

Americans disagree sharply about policy toward North Korea. Hawks suspect that patient diplomacy is no longer feasible, since North Korea will soon have the capability to strike targets throughout the United States, and normal assumptions about deterrence may not work with that government. Some even openly advocate a preventive war. Doves and cautious realists believe that additional, and more flexible, diplomacy is essential, because a second Korean War would be horrific.

All factions, though, should recognize that keeping U.S. tripwire forces in East Asia no longer serves a logical or constructive purpose. They are hostages that limit Washington’s policy options, if officials conclude that neutralizing the North Korean threat warrants drastic action. At the same time, if an accident or miscalculation occurs on either side, those troops become the first victims in an extremely tragic war. No matter if they are hawks, doves, or cautious realists regarding North Korea, Americans should agree that it is time to remove the nuclear hostages.