How to Keep Iraq's Unruly Militias Under Control 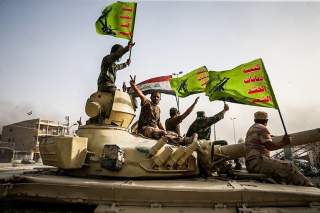 The military capability and reach of Islamic State has deteriorated so much over the past year that the Iraqi government will now need to think long and hard about the day after. Iraq’s Prime Minister Haider al-Abadi and his ministers in Baghdad have focused most of their resources and attention on the immediate priorities of pushing Islamic State out of Mosul, consolidating the gains made by the Iraqi security forces, and preparing the international community with the immense financial burden that will be required to reconstruct the country once the war is over.

The Iraqi Council of Representatives took a major step forward on the “day after” question last month when it passed a law that Sunni lawmakers are vehemently citing as further proof that the Shia-dominated parliament is intent on dragging Iraq towards a sectarian future. Thanks to the power of numbers, the Shia blocs were able to ram a law through the parliament that would incorporate the roughly 140,000 fighters of the Popular Mobilization Units into the regular Iraqi armed forces. Prime Minister Abadi is fully supportive of the plan, calling it a much-deserved recognition of the PMUs’ instrumental success on behalf of the Iraqi state against ISIS. Sunnis who have been in the militias’ line of fire are naturally taking a much different position, a testament to the group’s often indiscriminate tactics on the battlefield and its habit of sweeping through liberated areas like a destructive freight train.

Human rights organizations inside and outside of Iraq have documented numerous times when PMU militias—the vast majority of which were formed after Grand Ayatollah Ali al-Sistani issued a call to young men to help the army take the country back—abused their authority and practiced vindictive harassment on Sunni civilians. Human Rights Watch has released several reports detailing the PMUs’ retributive behavior, primarily directed against Sunni towns and cities that once boasted an ISIS presence. Tikrit was the most illustrative example of how out of control these units can be; according to HRW, “militia forces looted, torched, and blew up hundreds of civilian houses and buildings in Tikrit and the neighboring towns of al-Dur, al-Bu ‘Ajil and al-Alam along the Tigris River, in violation of the laws of war.” Hundreds of residents were also detained, based on nothing more than their Sunni sectarian identity and the unfortunate fact that they happened to live under ISIS’s dominion.

In virtually every operation that the PMUs have participated in, chaos and war crimes have not only been conducted, but left unpunished. In Fallujah, up to seven hundred men and boys streaming out of the city were detained by the militias, questioned, and presumably imprisoned or perhaps even executed. Months after these people were taken into custody, relatives and friends were still at a loss as to where they were being held or whether they were still alive. It’s the kind of track record that convinced Prime Minister Abadi that the PMUs should be left outside of Mosul’s city limits, and why the U.S. Air Force has refused to provide air support to militias outside of Baghdad’s command.

Yet as vicious as the PMUs have proven to be in the past, it would be foolish not to admit that they haven’t been detrimental to ISIS’s strength. When multiple divisions of the Iraqi Army and police force collapsed in 2014, it was the irregular militias that served as the crack force to stop ISIS’s ascent to Baghdad. Indeed, if it weren’t for the presence of these militias, it’s doubtful that the newly rebuilt and retrained Iraqi Army would have been able to drive ISIS away from Baghdad’s suburbs without high casualties. In fact, ISIS may have even been able to control the cities of Tikrit and Fallujah for a much longer period.

Like it or not, the PMUs provide the Iraqi government with critical manpower, just as the regular armed forces are hard at work attempting to finish ISIS off in Mosul.

There is therefore a certain logic to Prime Minister Abadi’s endorsement of reintegrating the PMUs into the Iraqi chain of command. The question, though, is whether this can be done without alienating the very Sunni community in Iraq that Baghdad will need if it genuinely wants to heal the sectarian fissures that have torn the country apart for the past thirteen years.

Before the militias are brought into the armed forces, Abadi should call on the parliament to clarify that any reintegration will only take effect if certain conditions are met.

First, before any PMU is formalized into Iraq’s security structure, these units must sever any and all contact with alternative lines of authority, particularly partnerships with Iran and Lebanese Hezbollah—two actors that have aided the more troublesome militias in the past. Financing for the PMUs should be controlled by the Iraqi government and not by a neighboring state with their own interests in mind.

Secondly, Abadi should appoint a technocratic commission supervised by his office that is responsible for overseeing the legalization of the PMUs. The duties of the commission should include a review of the units’ performance in the field, and whether those units are cooperating constructively with the Iraqi high command and following orders; the creation of a set of guidelines that will hold PMU commanders and fighters accountable if they misappropriate government funds; and the launching of investigations to ensure that any abuses against civilians are prevented and severely punished through prosecution, disbandment, or the withholding of state financing.

Thirdly, Prime Minister Abadi must make it clear that any unauthorized operations conducted by PMU units will result in censure. The Iraqi government cannot afford sectarian militias running amok and annexing specific parts of the country for their own parochial purposes. Iraq, in other words, need not return to 2004–08, when clerics like Muqtada al-Sadr were administering entire cities.

Finally, the Iraqi parliament should reopen the prospect of Sunni-majority provinces taking more ownership of their own security, perhaps through the establishment of tribal or provincial national guards (these national guards could also be legalized as an official branch of the Iraqi security forces). If this idea is too politically traumatizing for Shia MPs to consider, then they should at least amend the current PMU law in order to stipulate that Sunnis, Kurds, Turkmen, Christians and Yazidis have just as much of a right to be incorporated into the Iraqi security forces as the Shia.

Filling out the details will be the difference between rewarding militias that have engaged in violations of the Geneva Conventions (making reconciliation with Sunni populations in Iraq even more difficult in the process) and granting the PMUs the opportunity to become a responsible segment of Iraq’s security architecture.