How to Lose the War in Afghanistan 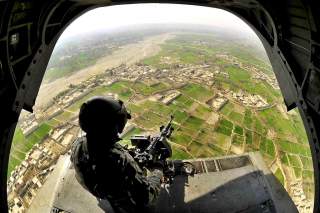 It is now official beyond question. The senior ranks of the U.S. military and foreign-policy leadership have now fully succumbed to the belief that all problems in the Middle East and South Asia must include, at their core, the application of lethal military power. No other alternative is considered. Worse, the military solutions they advocate have literally no chance of accomplishing the national objectives sought. The latest damning evidence: the commander of U.S. Forces in Afghanistan testified before the Senate last week that he believes thousands of additional U.S. troops should be sent back to Afghanistan.

It is difficult to overstate the utter bankruptcy of a strategy designed to bring peace to Afghanistan based on sending large numbers of U.S. service members back into harm’s way. The Washington Post reported in early February that Army Gen. John W. Nicholson Jr. said he “believes the new president may be open to a more robust military effort that is ‘objectives-based.’ Questioned by Sen. Lindsey O. Graham (R.-S.C.), the general said he can definitely carry out his mission with less than 50,000 coalition troops, but hesitated a bit when asked if he could do so with less than 30,000.”

The results of sixteen years conducting counterinsurgency, foreign military training and counterterrorism operations in both Iraq and Afghanistan should argue persuasively against repeating such a strategy. The results have been utter and complete failures on the strategic level. Supporters of using COIN and CT cite the Iraq “surge” of 2007 as an example of how a properly run operation can succeed. Such endorsements expose a significant lack of understanding of what actually happened in 2007 and, of greater importance, that those individuals have a marked inability to see beyond tactical outcomes.

The fundamental point that must be understood is that the surge of U.S. troops into Baghdad was not the causal factor in the dramatic reduction of violence. It was a contributing factor and did play a positive role, but without question was not the decisive one. In late 2006 the Sunni insurgency was beginning to buckle under the cumulative weight of attacks by the United States, coalition forces, Shia militias and the Iraqi security forces. The pressure turned into an existential threat, however, when Al Qaeda in Iraq (AQI)—an organization that should have been a natural Sunni ally—turned against them.

As was documented in great detail in Gian Gentile’s Wrong Turn, Sunni sheikhs recognized that their only chance for survival was to join with U.S. forces against their common AQI enemy. Beginning even before the surge was authorized by President Bush, Sunni sheikh Abdul Sattar Abu Risha from Anbar Province approached U.S. soldiers and offered to join with them in ridding Ramadi of AQI. The resulting “Awakening” began a process that was well under way when Gen. David Petraeus arrived the next year.

To his credit, when Petraeus saw how effective the program was, he successfully expanded it to other areas of Iraq. But it cannot be overstated that Petraeus’s efforts were successful primarily because other Sunni leaders saw the effectiveness of Sheikh Sattar’s efforts and wanted to replicate them. This point cannot be missed: the Sunnis never cooperated with U.S. forces because they “believed their future lay with the Coalition,” as one general famously said in 2008. They rationally saw that without a tactical union with America, they would be annihilated.

Dr. Sterling Jensen, one of the world’s leading experts on the Iraq surge, and Iraqi Gen. Najim al-Jabouri (currently commanding Iraqi forces assaulting Mosul) wrote of this period that “in fact, U.S. troops in general were not seen as useful even before the surge. When announcing the Anbar Awakening, Sheikh Sattar told the Americans that as long as the U.S. brigade helped locals become card-carrying security forces and be permitted to work in their areas, the U.S. forces could stay on their bases while the Anbaris fought.” No such conditions exist in Afghanistan today, nor did they in 2010 when the United States surged thirty thousand troops—and that explains why the Afghan surge did not knock out the insurgency.

Second, there remains a troubling lack of understanding at the most senior levels of U.S. government of the interaction between tactical operations and strategic outcomes. At the time of the Iraq surge, the most oft-cited justification for the operation was that the reduced level of violence provided “breathing space” to the Iraqi authorities to affect political reconciliation that would ultimately bring stability. But once cleared of the existential threat the insurgency posed to the Shia government, Prime Minister Nouri al-Maliki took advantage of the breathing space to eliminate most of his Sunni opponents. These oppressive tactics, in fact, helped facilitate the rise of ISIS three years after U.S. withdrawal from the area. Much the same scenario played out during the Afghan surge of 2010.

In mid-2009, then commander Gen. Stanley McChrystal sent a classified memo to the president stating that if he didn’t get more troops, the United States might lose the Afghan war. In December of that year, President Obama approved the deployment of thirty thousand U.S. troops (on top of the seventeen thousand he had deployed earlier that year), bringing the number of troops by 2010 to nearly one hundred thousand. I was on the ground in Afghanistan during that surge, and can authoritatively confirm that the only thing the surge accomplished tactically was the protection of the Afghan government in Kabul and the security of select lines of communication elsewhere in the country. But it did nothing to quell the insurgency.

In fact, it contributed to the insurgency. The level of violence that McChrystal warned could lose the war in 2009 was radically increased in 2010. When the U.S. forces ended their combat mission in 2014, the violence increased yet again. According to the United Nations, the casualty rate of the Afghan National Security Forces and civilian population were at—or near—record highs in 2016. Sending in another thirty thousand troops to train and advise Afghan soldiers might help to again secure Kabul and some lines of communication, but it will also cause a spike in U.S. casualties and a predictable increase in insurgent violence throughout the country. What it will not do is defeat the insurgency and end the war. If the United States expands the mission into Afghanistan at this present time, we may well end up committing our armed forces to a permanent state of war.

Lastly, as important as the above points are, the military strategy used by the United States is based on deeply flawed assumptions. General Nicholson said in his Senate testimony that “our primary mission remains to protect the homeland by preventing Afghanistan from being used again as a safe haven for terrorists to attack the United States or our allies.” Yet there is not now, nor has there ever been, anything special about territory in Afghanistan in representing a threat to the United States. Most of the 9/11 terrorists did their training in Germany, Florida and on the East Coast, not in the caves of Tora Bora. Terrorism has spread like wildfire across the globe, expanding into Southeast Asia, Central Asia, other parts of the Middle East and over millions of square miles in Africa.

There is no more danger to the United States from terrorists that live in Kunar Province than there is from terrorists living in ungoverned territory of Syria, Somalia, Tajikistan, Libya, Yemen, or a dozen other countries. Truly, it defies logic to suggest that the United States must permanently remain militarily active in the one spot of Afghanistan while countries around the globe burn with terrorist presence against which we do nothing.

There are other strategies that have a chance to work. They are not easy and none would guarantee success. But one can virtually guarantee that by repeating the military strategies we’ve used since 9/11, our efforts will fail. Until senior policymakers discover the resolve necessary to admit these preferred strategies are bankrupt, we can expect—regardless of how many troops the president deploys—the fires of terrorism in Afghanistan to burn, American service members to suffer the loss of lives and limbs, and U.S. interests to deteriorate.

Image: The view from the rear door of a CH-47 Chinook helicopter over Khost Province, Afghanistan. Wikimedia Commons/U.S. Army