How Much Longer Will Afghanistan Need America? 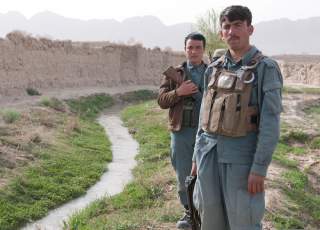 Last week in these pages, some of the most accomplished and well-respected members of the U.S. military and diplomatic service wrote an open letter to President Obama with some straightforward advice: please keep the full contingent of 9,800 U.S. troops in Afghanistan in place so the next Commander-in-Chief (whoever that might be) has more flexibility to make an informed decision. Withdrawing to 5,500 U.S. personnel by the end of the year, the authors write, would have detrimental effects on Afghanistan's security situation at a time when the country is still suffering from a Taliban movement that refuses to quit.

The letter was signed by five former U.S. Ambassadors to Afghanistan and five former U.S. commanders of the war effort across multiple administrations – including David Petraeus, John Allen, Ryan Crocker and Zalmay Khalilzad – which means that the recommendations are coming from some very powerful people. And the message they attempted to convey to the White House couldn't have been clearer:

“[W]e urge you to maintain the current U.S. troop strength in Afghanistan through the end of your term. Based on longstanding experience in the country as well as recent trips to Afghanistan by some of us, this step would be seen as a positive reaffirmation of America’s commitment to that nation, its people and its security.....Conversely, we are convinced that a reduction of our military and financial support over the coming months would negatively affect each of these.”

According to the Wall Street Journal, President Obama is in the middle of determining precisely what that U.S. troop level will be. He will reportedly make that decision sometime next month. U.S. Commanding Gen. John Nicholson is currently finalizing his three-month assessment as to the state of play in the country and what he recommends in terms of U.S. force structure going into 2017.

If precedent is any indication, it is highly likely that President Obama will put a lot of weight behind Gen. Nicholson's recommendations – as it should be. For all of the hand-wringing from congressional Republicans that the White House puts a premium on domestic politics above the assessment of the commanders in the field, President Obama has shown time and again that he is open to revising his troop withdrawal schedule based on the conditions on the ground and the input of the men and women running the war effort. Indeed, his decision to scotch the planned redeployment of all but 1,000 U.S. troops by the beginning of 2017 was the latest is a list of decisions Obama has made over the past two years regarding revisions to his strategy.

The major questions, however, aren’t addressed in the letter: what exactly does the United States want to accomplish in a society that has been torn apart by armed conflict and civil war for the past four decades? Are those objectives attainable? And if they are, how much is the U.S. Government willing to expend in terms of blood and treasure in order to meet those objectives?

Fifteen years into a war that first began one month after the 9/11 terrorist attacks, the U.S. mission in Afghanistan has shifted into something far more expansive and ambitious than its original rationale.

What was first billed by the Bush administration as a counterterrorism mission to demolish Al Qaeda and overthrow the Taliban regime that harbored them has long morphed into one of nation-building – a multi-year engagement that has aimed to transform a society from the ground up. Efforts to establish a legitimate central government (and to keep it legitimate), create an indigenous Afghan economy that would be resilient enough to pay for its security forces, and a democratic system that values the importance of checks and balances and accountability has cost the U.S. taxpayer hundreds of billions of dollars. Despite that investment, how many of those goals have been achieved?

Mission creep is a loaded term in Washington. It often gets volleyed around by Republicans and Democrats on Capitol Hill to question the judgment and wisdom of the man who happens to occupy the Oval Office at any given time. But in the case of Afghanistan, the mission creep phrase happens to be an accurate depiction of what the fifteen-year engagement has become.

To his credit, President Obama recognized during his first presidential campaign in 2008 that Afghanistan was a serious problem that would have gotten far bleaker if the security situation wasn't turned around and the Taliban weren't put back on the defensive. The surge of troops in 2010 and 2011 provided some room for Washington to rebuild an Afghan army and national police force that was decrepit, aging, and riddled with ghost soldiers who either failed to show up for work or didn't even exist. Compared to 2007 and 2008, the Afghan national-security forces are much tougher; the fact that they still have very serious issues plaguing the force (according to U.S. Special Inspector General John Sopko, the U.S. really doesn't have any clue how many men are within the ranks of the Afghan army and police) should not overshadow the bravery and tenacity that the Afghans have demonstrated on the ground. Transplanting democracy into Afghanistan, however, has been a much more difficult endeavor and one that may have been unattainable to begin with – a project that would have required a culture shock in the way the country has conducted its internal affairs for decades.

Regardless of what President Obama decides to do, his successor will be stuck in a very uncomfortable position with choices that range from bad to very bad to worse. The next president can either keep the current number of U.S. forces in Afghanistan to hold a nefarious status-quo; withdraw U.S. troops and risk the Afghan government collapsing without American military and economic assistance; or buck the previous administration's war strategy by increasing American force levels (call it a mini-surge) and authorizing them to once again engage in combat operations across a broader target set in more areas of the country.

All of the letter's signatories are worried that the less Americans that you have in Afghanistan, the more likely that the Afghan security forces will experience a rate of desertion and attrition that will unsustainable. This is a concern that is more than legitimate.

And yet the reality that a collapse of the ANSF without U.S. assistance would speak volumes. For if the Afghans can't stave off an implosion after fifteen years of U.S. investment, over $68 billion in security assistance, and countless opportunities to get their politics under control, how much more time will they need? How many more $3 billion checks is the U.S. Congress willing to write?