How to Play Geopolitical Poker with Kim Jong-un 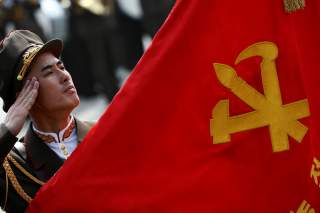 One of the chief fears about North Korea’s possession of nuclear weapons is the increased risk of a conflict no one wants. It might be started by accident, mistake, or misjudgment. By Kim Jong-un, assume most Americans.

Yet the Democratic People’s Republic of Korea is behaving like normal: bombastic and threatening in rhetoric, but cautious and restrained in behavior. The DPRK’s last direct military provocation, which justified South Korean retaliation and could have triggered a conflict, was in 2010, with the sinking of a naval vessel and bombardment of an island. Since then there has been missile and nuclear testing, but only long-standard rhetorical threats to act.

The Trump administration, in contrast, has dramatically changed Washington’s approach. President Donald Trump has gone mano-a-mano with Kim in the threat department. The former threatens fire and fury and talks of sending armadas. Insults and warnings fly fast and furious. More ominously, the president and his officials have suggested that war is inevitable if the North does not concede everything America demands. The DPRK must give up its missiles and nukes and then hope for the best while apparently relying on perhaps soon-to-be-former Secretary of State Rex Tillerson’s promise that Washington does not seek regime change.

If President Trump is serious about starting the Second Korean War, then he should be aware that more than North Koreans would suffer. The first Korean conflict consumed three to four million lives. Depending on the North’s capability to deliver weapons of mass destruction—biological, chemical and nuclear—on civilian targets such as Seoul and Tokyo, even more could die in the second round. South Korea would again be a battlefield and the entire peninsula would be wrecked; the economic disruption would be enormous.

Yet the danger may be almost as great if the president is only attempting to intimidate Kim Jong-un. Threatening the North strengthens its case for a nuclear deterrent: only with the ability to retaliate against the U.S. homeland could Pyongyang be certain of preventing an American attempt at regime change. The more administration officials say war is going to happen, the more urgent it is for the DPRK to perfect its missile and nuclear technology.

Moreover, if the North believes an attack is inevitable, it should plan to strike first. To stand by and allow Washington to build up its forces, strengthen Seoul’s defenses, withdraw noncombatants, and open the campaign with massive bombing of North Korean forces would be to guarantee a speedy defeat. That movie played twice in Iraq and shorter versions also were shown in Afghanistan and Libya. Kim certainly doesn’t like the common ending.

In contrast, damaging or destroying military and transportation facilities in Pusan, Guam, Okinawa, Tokyo and elsewhere would greatly hinder American efforts. The North might also attempt to grab Seoul as a bargaining chip or threaten to retaliate against Seoul and Tokyo if Washington did not agree to a ceasefire. Belief that U.S. threats and actions triggered the conflict might divide the Republic of Korea and its American ally.

Exactly what would convince the Kim regime that the Trump administration was about to strike is unknown. But the president’s aides and supporters seem to be doing their best to make the threat appear real, which could have horrendous consequences.

For instance, UN Ambassador Nikki Haley, perhaps the shrillest administration voice next to the president on attacking Pyongyang, has questioned whether Americans would attend the upcoming Olympics in South Korea. White House press secretary Sarah Huckabee Sanders has said that Olympics attendance was an open issue about which “no official decision has been made.” Imagine if the administration announced that it was banning—or merely recommending against—attendance at the global event.

Similar is Sen. Lindsey Graham’s insistence that the administration should “start flying out noncombatant U.S. citizens” from the South. Estimates of the number of Americans who live in the ROK range up to a half million. That number includes students, business people, tourists, and families of diplomats and service members. Imagine if Washington announced that it was initiating a massive airlift for Americans and recommending against private travel to South Korea.

There would be consternation and panic in the South. Residents of Seoul, who until now have remained largely unaffected by the Kim-Trump rhetorical slugfest, could not help but react. Many would start to look for an out as well. Even more so other foreign visitors,

The reaction in Japan would be similar. Th Japanese would see U.S. military installations and Japanese cities alike at risk. Moreover, Americans there and in Guam, also within range of North Korean missiles, might demand transportation home as well. China and Russia could not ignore what looked like Washington’s unstated intent to attack.

Nor could the DPRK. Kim now might believe Trump to be a paper tiger, big on rhetoric but not much else. However, if the United States consciously and officially unleashes chaos across Northeast Asia, the administration either is going all-in on a bluff or really is preparing for the war that the president and his aides have been planning.

In which case, the North would have to begin preparing its response. To believe it was more geopolitical poker would be taking a huge risk. Pyongyang at least would likely become hyper-sensitive to American threats and actions, prepare to use or lose its most important weapons, and plot how to disrupt U.S. plans. With such an atmosphere, it wouldn’t take much to start the war that both sides were treating as inevitable.

There are some adults in the administration. For instance, Defense Secretary Jim Mattis responded to a question on the issue by emphasizing diplomacy. One suspects that his private reaction probably was a bit harsher. And the U.S. Olympic Committee, which is not a government agency, insisted that it was having no second thoughts about participating in the games that are to be held in the mountainous region of Pyeongchang some fifty miles from the DMZ, which marks the border with North Korea.

Hopefully the president realizes that war at any time is serious business. War with a hostile, paranoid state which possesses a sizable conventional military and variety of WMDs and missiles is really serious. The lives of millions of people are potentially at stake.

One of the dangers of nuclear proliferation is increasing the chance of a war no one actually desires. Unfortunately, the United States and North Korea could bring about such a calamity. Now, more than ever, the administration needs to take a grown up approach to the Korean Peninsula.

Doug Bandow is a senior fellow at the Cato Institute. A former special assistant to President Ronald Reagan, he is the author of several books, including Tripwire: Korea and U.S. Foreign Policy in a Changed World and coauthor of The Korean Conundrum: America’s Troubled Relations with North and South Korea.