How to Spot an Iran Nuclear Deal Violation 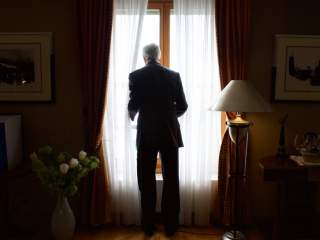 For President Barack Obama and his national security team, this past July, August, and September were some of the most consequential for the administration’s foreign policy legacy. It was in these three short months where the Obama administration’s signature foreign policy achievement of his second term, the successful completion of the Joint Comprehensive Plan of Action, was being actively debated, kicked around and criticized by members of Congress. The first week after the Iranian nuclear deal was signed was nothing short of a disaster in terms of public relations for the administration: along with the unanimous opposition to the agreement from congressional Republicans, a sizable portion of the president’s own party demonstrated a quantity of skepticism that no doubt unnerved many officials in the White House and the State Department.

The sentiment was summarized perfectly by Sen. Dick Durbin (D-IL), the Senate Minority Whip who would later become the administration’s point man on Capitol Hill for corralling Democratic votes in favor of the nuclear accord. “They [congressional Democrats] are getting a lot of pressure from constituents who are suspicious of any agreement,” Durbin said in July.  “[Obama] has his hands full.”

As the weeks turned into months, however, President Obama pulled out all the stops.  He invited dozens upon dozens of House and Senate Democrats to the Oval Office to discuss the fine print of the JCPOA in an attempt to alleviate concerns that the sanctions snapback mechanism would not work and that the Iranians would be able to cheat without severe consequences. It seemed as if Obama gave more interviews during the months this past summer than he did during the previous six years of his presidency.

Ironically, his Republicans opponents helped the administration seal the deal. When senior GOP lawmakers could not articulate a better alternative other than arguing for “a better deal,” Democrats in Congress slowly started to come around to the conclusion that—its faults—the Iranian nuclear agreement was probably the best option on the table. The end result: Republicans were several votes shy of invoking cloture on a motion of disapproval. The JCPOA would survive enough to be implemented.

More than three months after that cloture vote was taken, a sense of panic on both sides of the aisle has returned to the Capitol over two ballistic missile tests conducted by the Iranians in violation of U.N. Security Council resolutions. In a span of about five weeks, the Iranian military breached their ballistic missile obligations on two separate occasions. The first launch occurred on October 10, and was subsequently ruled a violation by the UN’s panel of experts, while the second happened on November 21 and consisted of a missile with a 1,200-mile range.

Needless to say, Senate Republicans are not happy with the administration’s response to these missile tests. A letter spearheaded by Sen. Kelly Ayotte (R-NH) and signed by thirty-five of her Republican colleagues was tough and unequivocal: “A failure of your administration to follow tough statements with tangible consequences,” the letter reads, “invites Iran to continue violating its obligations and threatens Americans and our allies.”

Not to be outdone, Senate Democrats came out with their own letter to the President, signed by 45 percent of the caucus, expressing concerns that the administration is not doing enough to respond to the reported infractions. “[W]e request that you [the President] take action unilaterally, or in coordination with our European allies. Such action is essential to make clear to Iran’s leaders that there will be consequences for future violations of UN Security Council Resolutions and that the United States reserves the right under the JCPOA to take unilateral action. . . ”

Are Republican and Democratic lawmakers justified to be so worried about Tehran’s ballistic missile tests? In a word: yes. Any violation of a U.N. Security Council resolution is serious business and should be taken with the seriousness it deserves.

But before Congress gets too hyped and tries to use these incidents as an excuse to ruin the diplomatic work of the previous three years (Senate Republicans are already calling for the sanctions relief to be suspended), let’s put things into perspective.

First, although Iran’s test firing of ballistic missiles is covered under the same Security Council resolution that encompasses the JCPOA, missile work is technically not part of the nuclear agreement. A violation of the missile ban does not translate into a violation of the Iranian nuclear accord. Therefore, trying to link the two in an attempt to discredit the JCPOA is disingenuous.

Opponents of the JCPOA would like to compare the Security Council’s inability to respond to Iran’s October 10 and November 21 missile tests and argue that this inaction is a sign of things to come with the nuclear agreement.  Sens. Bob Corker (R-TN) and Ben Cardin (D-MD), the chairman and ranking member of the Foreign Relations Committee, said as much in their respective letters: letting Tehran break the law will inevitably lead to Ayatollah Ali Khamenei to break his JCPOA commitments.

As appealing as that line of reasoning is, its rationale weakens when scrutinized more closely.  Unlike the ballistic missile issue, where penalties for noncompliance require unanimity among the five permanent members of the Security Council, the sanctions mechanism codified in the JCPOA is completely different. Unlike in all other Security Council regimes where the permanent members need to be in lockstep for more penalties to be passed, the United States has the power under the JCPOA to bring the entire international sanctions regime back into place unilaterally if Tehran is caught cheating. If it takes unanimous approval from the United States. United Kingdom, France, Russia and China to levy additional sanctions on Iran for missile production and testing, it takes unanimous approval from all five nations to continue sanctions relief under the Iran nuclear agreement. In other words, a U.S. veto will end the economic relief.

It doesn’t take a lot for Congress to get worked up when Iran is the focus of the conversation.  But Republicans and Democrats on Capitol Hill can rest assure this holiday season: if it’s relatively easy for Iran to breach U.N. Security Council Resolution 1929 thanks to Security Council paralysis, it will be enormously difficult for Tehran to do the same thing under the JCPOA.