How to Strangle ISIS with Diplomacy 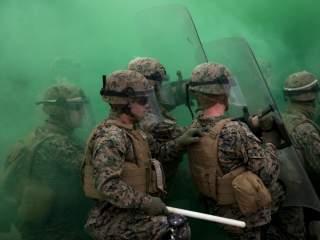 Prior to the horrific terror attack in Brussels, Ohio governor and Presidential candidate John Kasich said that to defeat the Islamic State (ISIS), the United States must deploy troops “in significant numbers” on the ground “and in the air both in Syria and Iraq. And at some point, we will have to deal with Libya.” It seems intuitive: the battle against ISIS using only airpower has thus far proven inconclusive. However unpalatable it may be, if we want to defeat them, we’re going to have to send in ground troops; the security of America depends on it. However, deploying U.S. combat troops to Iraq and Syria will not defeat ISIS and therefore will not safeguard American security.

The reason the United States has thus far failed to defeat ISIS isn’t because we’ve deployed insufficient levels of combat force. It’s because we’ve been relying on the wrong instrument. For very practical reasons, a national effort relying primarily on diplomacy has a chance to achieve U.S. policy objectives where a military-first approach does not.

The Second Battle of Fallujah provides graphic evidence as to why a military-first policy in this case will not succeed. In 2004 the U.S.-led campaign completely eradicated the insurgent enemy house-by-house, but also left the city largely destroyed, embittering the population against America. After achieving an unequivocal military victory on the ground there, Fallujah was lost to ISIS two years ago almost without a fight. The Battle of Fallujah was a tactical victory but a strategic defeat. Even with robust military power on the ground, it is possible the United States could, at great cost both to itself and the region, eventually deal ISIS a tactical defeat but leave all the conditions in its wake for the rise of a new, even more capable militant Islamic group.

A diplomacy-first approach, however, has the potential to succeed against ISIS where a military-first policy won’t.

For ISIS to remain a viable entity it must maintain an effective logistics system. No militant organization—whether a rag-tag insurgent group or a modern state military—can fight unless it has sufficient delivery of food, water, ammunition, weapons, fuel for vehicles and generators, spare parts, effective battlefield healthcare, and a replacement troops. Render that logistics system inoperative and ISIS dies in the field.

It is conceivable a massive field army could go in and occupy the region and destroy the logistic system, but as we’ve seen in such graphic detail, eight years of counterinsurgent fighting and occupation in Iraq succeeded only in destroying large sections of the civil infrastructure and eventually pushed the insurgents underground. The defeated remnants of Al Qaeda in Iraq melted into the population, reformed into ISIS and rose again as an effective fighting force less than two years later. Repeating that cycle doesn’t serve American interests.

The support the Islamic State requires cannot be sustained via ratlines and smuggling alone. They are landlocked everywhere they control territory. The only way ISIS can sustain themselves is if they have the secret support—either passive or active—of the states surrounding them: Iran, Turkey, Lebanon, Jordan and Saudi Arabia. Therefore, the United States must use its intelligence capability to identify all the sources from which ISIS receives logistics, and then employ the full force of its diplomatic might to pressure those groups or states to cease such support.

I cannot overemphasize: if the United States were to be successful in gashing ISIS’ ability to resupply itself by convincing or compelling the major states in the region to block illicit resupply operations (or cease covertly providing them), ISIS would collapse as an effective fighting force, the civil infrastructure would remain intact and millions more civilians would not be forced from their homes.

The military would be necessary to provide teeth for the diplomatic moves. All the talk and agreements in the world mean nothing if there’s not a powerful instrument to force compliance. The U.S. Air Force could supply air cover to enforce a blockade of the known supply routes. Surrounding nations would use their own intelligence apparatus and ground troops to aggressively patrol their borders to curtail ISIS’ ability to keep itself supplied, fueled and fed.

Diplomacy by itself can’t achieve political outcomes. It requires a highly competent and effective military in support. But a plan to bludgeon the enemy into submission with the military instrument will not achieve desired outcomes. It is time to rebalance the means by which the United States seeks to achieve international outcomes. The military should support diplomacy, not be elevated above it.