How the Last War in Korea Began 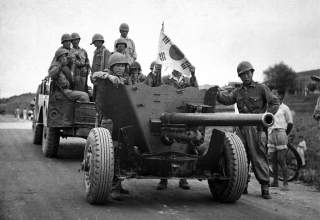 To demonstrate he means business, President Donald Trump orders a U.S. aircraft carrier, two guided-missile destroyers, a guided-missile cruiser and a nuclear-powered submarine to the waters off North Korea. Kim Jong-un, the supreme leader of the Democratic People's Republic of Korea, responds by threatening to sink U.S. carriers and putting on a large live-fire exercise,  featuring hundreds of large caliber artillery guns. The United States and North Korea are today closer to reigniting a war than at any time since an armistice was signed in 1953. That war, which began in the summer of 1950, didn’t begin well for American Forces.

As part of the Potsdam Conference that ended the World War II, the Korean peninsula was divided equally between the United States and Soviet Union along the 38th Parallel. Before the war in the Pacific came to an end, Soviet troops were amassing for an invasion of Manchuria and U.S. troops were amassing for the assault on the Japanese Islands. Both armies ended up on opposite poles of the Korean Peninsula awaiting a return to their homelands.

The bulk of both military forces were withdrawn from Korea by 1949, leaving behind advisors to counsel their respective Korean supporters. The United Nations had organized an election in May 1948 that was supposed to have been for the entire peninsula, but Soviet advisors and the leader of the Korean communists in the North, led by Kim Il-sung, refused to allow UN election workers into the north. Syngman Rhee became the first president of South Korea.

Kim Il-sung regarded the UN-sponsored vote as illegitimate and desired to conquer the south and reunify the peninsula by force under a communist government with himself at the head. Rhee likewise regarded the communists as renegades and wanted U.S. help to take the north by force. In 1949, however, neither Soviet Union leader Josef Stalin nor U.S. President Truman had any appetite for war so close to the end of World War II, and neither supported the request of their favored leader.

In January 1950, however, a number of factors began to change the calculus in the mind of Stalin, and the idea of a North Korean invasion of the south began to gain traction in his mind. First, U.S. Secretary of State Dean Acheson gave a speech in Washington, DC in which he said, “ . . . ” Stalin regarded this as evidence that the United States would not intervene to prevent North Korea from conquering the South, which Kim had convinced the Soviet leader he could do quickly.

One month later, in February 1950, China and the USSR signed the the Sino-Soviet Treaty of Friendship, Alliance and Mutual Assistance, which provided for mutual defense against Japan or “any other state directly or indirectly associated” with Japan. Chinese premier Zhou En-lai lauded the agreement, declaring that now the two communist nations would be “impossible to defeat.” Stalin now believed he had nothing to fear from China, and that America had no appetite for war, and thus gave Kim the green light to invade south.

What Stalin failed to recognize, however, was the effect the Sino-Soviet treaty had on Washington. President Truman became convinced that with the linking of the two communist behemoths was proof that communism was on a global march and desired to subdue governments around the globe. When Kim Il-sung launched his invasion of South Korea in June of that year, far from being passive, Truman responded with resolve.

In a statement he released to the nation in July 1950, he said North Korea’s attack “makes it plain beyond all doubt that communism has passed beyond the use of subversion to conquer independent nations and will now use armed invasion and war.” But the United States was caught flat-footed by the war, and the U.S. Army in particular was in a poor state of readiness.

North Korean mobile armored troops were initially having the success Kim Il-Sung envisioned. U.S. military leaders would have liked to have had more time to prepare and train their forces, but feared that if they did not quickly put American ground troops into the fight, the South might lose the war before they had a chance to deploy.

The decision was made, therefore, to send the 24th Infantry Division, then stationed in Japan, to blunt the North’s drive. Because the division was spread thin, the first contingent they could assemble was a four-hundred-man under-strength infantry battalion dubbed Task Force Smith, after its battalion commander, Lt. Col. Charles B. Smith.

U.S. leaders weren’t worried about their small size, however. The expectation was that when the North Koreans realized there were American troops on the ground, they would retreat in fear. Gen. William F. Dean, 24th Infantry Division commander, told Lt. Col. Smith just before he left Japan, “When you get to Pusan, head for Taejon. We want to stop the North Koreans as far from Pusan as we can.

“Block the main road as far north as possible. Make contact with General Church,” he continued. “If you can’t find him, go to Taejon and beyond if you can. Sorry I can’t give you more information—that’s all I’ve got. Good luck, and God bless you and your men!” That skimpy information was to prove fatal for Smith’s men.

Task Force Smith was ready for action upon their arrival. The battle group consisted of two infantry companies, a small artillery battery of six guns and a few mortars. The higher commander on the ground, Gen. John Church, gave Smith his first mission, telling him “We have a little action up here. All we need is some men up there who won’t run when they see tanks.” The general apparently had a flair for the understatement.

Task Force Smith went into action north of Osan, about twenty-five miles south of Seoul. Even before the first North Korean tanks came into view, Smith was worried. He had only two infantry companies armed with rifles and a few machine guns, but only six small-caliber artillery guns—and those guns came equipped with only six rounds of anti-tank ammunition.

Still, he had been told that Gen. Douglas MacArthur expected the North Koreans to retreat as soon as they realized American combat troops were now in the fight. This was a police action, he had also been told, and he and his men would be home in Japan very soon. More than 150 of his men, however, would be killed, wounded, or missing by the end of that day.

Shortly after dawn on July 5, 1950, eight enemy T-34 tanks came into view, rumbling south. First the artillerymen went into action, showering the tanks with 105mm shell fire. It had no effect. The tanks didn’t even appear to notice the attack and continued towards the American line.

When the first tank got within seven hundred yards of Smith’s men, he opened fire with 75 mm recoilless rifles. There were now a total of thirty tanks visible and heading towards him. The shells bounced harmlessly off the tanks. Still they had not slowed their advance. Fear now began to rise in the American’s minds.

One U.S. lieutenant grabbed a bazooka—a rocket-propelled grenade launcher—and fired twenty-two shells at a single tank. Not one round penetrated the armor, even in the rear of the tank. Col. Smith tried to reach the artillery battery to request suppressing fire, but the wire to the field telephone had been cut by tank treads—and all the radios had gotten wet and not one was functioning. He was now cut off and alone to face North Korean armor.

After several hours of fighting as best he could, Smith observed transport trucks disgorging hundreds of North Korean infantry troops about one thousand yards away. Task Force Smith troops fought with valor and courage, and began to have success in killing many of the enemy infantry troops. But there were too many of them and the troops were running out of ammunition. Recognizing that the battle was lost, Smith gave the order to withdraw before his entire force was wiped out.

On the morning of July 6, Smith was able to account for only 250 of his original contingent of 406 troops. In his seminal work on the Korean War, author T. R. Fehrenbach wrote in This Kind of War, that Task Force Smith, which was “designed to be an arrogant display of strength to bluff the enemy into halting his advance, had delayed the Inmun Gun (North Korean army) exactly seven hours.” The U.S. Army and other military leaders would later recover from this shameful beginning, but for the men of Task Force Smith, the lessons learned would come too late.