How the U.S. Can Win Over China and Silence North Korea 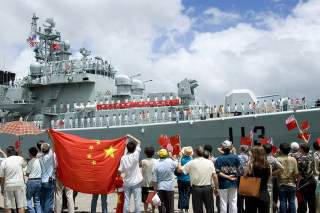 North Korea’s recent ballistic-missile test has triggered new demands in the United States that China pressure Pyongyang to cease its disruptive and provocative behavior. Senate minority leader Charles Schumer is the latest voice to join the chorus. Such calls have taken place for many years with few signs of success. There is growing anger and frustration in U.S. political and policy circles with Beijing’s tepid support for economic sanctions and other coercive measures against its longtime ally.

The underlying assumption is that China has tremendous influence over North Korea and is the one country that could bring Pyongyang to heel. New York Times columnist Tom Friedman once stated that Beijing could end North Korea’s misconduct “tomorrow” with one uncompromising message to that country’s government.

There is no doubt that China has more influence over North Korea than any other country. And the potential for even greater leverage exists. China provides a majority of North Korea’s food and energy supplies, so a cutoff—or even a major reduction—in those supplies would likely create a crisis for Pyongyang.

Nevertheless, American politicians and pundits tend to overestimate the extent of Beijing’s influence, unless Chinese officials are willing to resort to such a drastic option. And that course would entail severe potential risks for China. It could destabilize North Korea, leading to massive refugee flows into its northern neighbor as well as South Korea. Worse, a desperate North Korean leadership might lash out with the kind of military adventurism that everyone wishes to deter.

There would have to be extremely appealing incentives for Beijing to consider adopting such a high-risk strategy. Yet American officials and opinion leaders who demand that China take action almost never even hint at the incentives that Washington, DC should offer. They need to realize that foreign policy is rarely a charitable enterprise, and Chinese foreign policy is never a charitable enterprise.

What could Washington offer Beijing to get that government to become much more hard-line and proactive regarding North Korea’s unacceptable behavior? Four possibilities for concessions come to mind.

Taiwan. Beijing’s frustration with Taiwan’s de facto independence is resurging after the triumph of the pro-independence Democratic Progressive Party in the 2016 presidential and legislative elections. As president-elect, Donald Trump exacerbated Chinese worries when he had an unprecedented telephone conversation with Taiwanese president Tsai Ing-wen. Later, Trump even asserted in a media interview that the United States felt no obligation to be bound by the “One China” policy. He has since modified that stance by stating to Chinese president Xi Jinping that his administration would not challenge that policy.

However, the United States could go far beyond a status quo position in exchange for vigorous Chinese action against North Korea. Beginning with the Shanghai Communiqué that Richard Nixon signed in 1972, Washington has acknowledged China’s position that Taiwan is an integral part of China, but has never endorsed that position. The option exists to make that policy change, which would be a very appealing concession. The United States would sweeten the offer further by explicitly pledging to phase out arms sales to Taipei by a certain date. The combination would undoubtedly be extremely tempting to Beijing.

It would be a difficult concession to make, though, both in terms of policy and domestic politics. Taiwan has become a robust democracy, and the island is strategically located, especially if Washington wants to continue its policy of thwarting Beijing’s ability to project its naval power out into the western Pacific. Taiwan has a large number of admirers and allies in Congress and the overall American policy community, so the opposition to concessions at that entity’s expense would be ferocious. If they ponder making possible offers, U.S. officials would probably look elsewhere for an easier option.

South China Sea. Tensions have been rising for years between China and the United States over Beijing’s expansive ambitions in the South China Sea. China’s alleged historical claims would encompass over 80 percent of that body of water. Matters have become even more contentious in the past two to three years as China has embarked on an extensive project to build land onto reefs and other small structures to boost its claims. Some of the reefs have now been expanded enough to accommodate Chinese military hardware and, in at least one case, even an airstrip.

Not only have such actions upset neighboring nation-states that have their own claims in the South China Sea, but it has impelled the United States to become involved. U.S. policymakers fret that Beijing intends to turn international waters into Chinese territorial waters. Such a move, the U.S. reasoning goes, would put China in a position to strangle navigation through the South China Sea—an area through which passes some of the world’s most important sea lanes involving billions of dollars in commercial shipping each year.

The U.S. Navy has already conducted numerous so-called freedom of navigation patrols to emphasize Washington’s determination to block Beijing’s ambitions. The Obama administration had also tilted in favor of virtually any rival claimant, pursuing a de facto “anybody but China” policy regarding territorial claims, despite official assurances of neutrality.

A U.S. concession on the South China Sea would take two forms. First, Washington would need to be neutral in its actions, not just words, regarding the competing territorial claims. Second, the United States would cease or at least drastically reduce its freedom of navigation patrols. That would be accompanied by a statement to China that the U.S. Navy will not maintain a substantial presence in the South China Sea as long as Beijing takes no steps to menace or violate freedom of navigation. Such a policy shift would require an increase in trust about China’s intentions, but since that country has a vital stake as a leading export power in not disrupting the sea lanes, it is arguably not an undue risk. However, it is not certain that concessions regarding the South China Sea, while important, would be sufficient to induce Beijing to coerce North Korea.

The East China Sea. A third possible candidate for U.S. concessions would be moving away from a knee-jerk alignment with Japan concerning that set of issues involving the East China Sea. China has pursued two objectives there. One is an attempt to establish an Air Defense Identification Zone, which would require aircraft transiting the area to keep Beijing informed. The United States and its allies have openly defied China’s attempt to establish and enforce such a zone.

Beijing’s other policy goal is even more contentious. China lays claim to the Senkaku Islands (which are called the Diaoyu Islands in China). The islets are little more than uninhabited rocks, but the surrounding waters are rich fishing grounds, and there are indications that there may be substantial petroleum and other mineral deposits in the vicinity. Tensions between China and Japan have flared several times over the dispute.

It is far from clear which country has the better historical and legal claim, although Japan currently has possession. Washington embraces Tokyo’s position that the U.S.-Japan mutual defense treaty covers not only indisputable Japanese territory, but the Senkaku Islands as well. During his recent trip to Japan, Secretary of Defense James Mattis explicitly reiterated that stance.

Washington could make major concessions on both issues. Recognizing China’s Air Defense Identification Zone would not be terribly painful and might, in fact, enhance air safety. Chinese uneasiness about unidentified planes, especially foreign-military aircraft, operating in airspace near the China’s coast is understandable. A concession on that issue would be welcomed in Beijing, but it would hardly be sufficient to cause a major change in Beijing’s North Korea policy.

That would likely require a complete shift in the U.S. position on the Senkaku Islands. Washington’s willingness to put America’s security at risk over those islets is unwise in the first place. A statement from U.S. officials that America no longer asserts that the bilateral defense treaty applies to the Senkaku Islands, and that Washington is strictly neutral regarding the relative merits of the rival territorial claims, might go far in encouraging Beijing to reassess its North Korean relationship.

South Korea. A final, and probably the most relevant, policy change that Washington could make involves its relationship with South Korea. Not only does China worry about the risk of completely destabilizing North Korea if it applies too much pressure on Pyongyang, it worries about the possible strategic ramifications. Although North Korea is a frustrating and dangerously volatile ally, it also serves as a significant territorial buffer between China and the rest of Northeast Asia dominated by the United States and its allies.

If North Korea imploded, Beijing would face the prospect of a united Korea allied militarily with the United States. Worse, China could face the prospect of U.S. military bases in what is now North Korea. Even if Washington offered verbal assurances that it would not take such action, China would have reason to be skeptical. After all, the United States exploited the fall of the Soviet Union and the weakness of Russia as a successor state to expand NATO right up to the Russian border. And now, Washington has stationed troops and weapons systems in those countries.