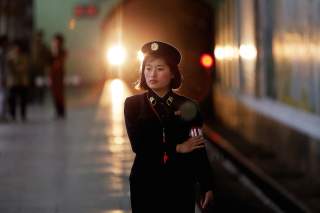 In the popular mind, there may be no more forbidding destination on earth than Pyongyang. Other than a war zone, I’ve never had as many people ask if I was serious when I mentioned I was heading to the Democratic People’s Republic of Korea. Some seemed convinced that I would end up as the latest American featured in a televised show trial.

In fact, I had no worries on that score. I was going as an official guest, invited by the Institute for American Studies of the Foreign Ministry. I’d visited once before, twenty-five years ago; that trip proved fascinating but uneventful—at least in returning as planned. Having invited me, the North Koreans wanted the trip to proceed smoothly. I also understood what not to do.

Failing at the latter has proved to be the undoing of a number of Americans, most spectacularly student Otto Warmbier, who died after being released while in what Pyongyang claimed was a medically induced coma. Three other Americans remain in custody: two who worked at a Christian school, leading to suspicion that they had engaged in evangelism, and a Korean-American businessman, convicted of espionage, about whom little is known.

Some attributed Warmbier’s release to the Trump administration’s greater assertiveness, though this administration has no more leverage than its predecessor. A U.S. diplomat held talks with the DPRK, but his writ supposedly was limited to the four incarcerated Americans. If the president made a deal, the administration has not disclosed what was given in return.

While Washington demanded Warmbier’s release, it did so only after the North Koreans unilaterally disclosed his condition. Moreover, the president didn’t similarly demand the release of the other three U.S. citizens, presumably because he knew the answer would be no.

While in the North last week, I asked if the government sent Warmbier home as a conciliatory gesture to the Trump administration. The unequivocal response was that it was strictly a humanitarian matter. In fact, a Foreign Ministry official told me that a court had released Warmbier, rejecting any inference that the DPRK sought a diplomatic opening to Washington.

Although the United States should urge the release of its citizens, it is in no position to dictate. Successive administrations used most every tool to try to stop the North from developing nuclear weapons and testing missiles, without success. War is no option, sanctions won’t work without Chinese acquiescence and negotiations so far have failed. There isn’t much more to do to free those seen as unjustly imprisoned.

Otto Warmbier’s family blames the Obama administration for failing to win his release, but the decision always was Pyongyang’s, not Washington’s. Why the DPRK released him now is impossible to know: perhaps Kim Jong-un decided that holding a comatose prisoner was a political liability, and this was the right moment to offer a gambit pawn in the global chess game. The DPRK has more to gain from a conciliatory gesture to incoming Donald Trump, a man who built his career on flamboyant gestures and claims of victory, than to outgoing Barack Obama, who largely avoided serious negotiation with the North.

The cases of Warmbier and the other Americans, some going back years, are uniformly tragic: people punished, sometimes severely—and perhaps lethally in Warmbier’s case—for actions that should not be considered criminal. But Americans are not the only victims. At the moment, the DPRK holds six South Koreans and seven other non-Americans.

Moreover, the DPRK is not alone in penalizing foreigners for dubious crimes, such as evangelism. Even though China has relaxed legal strictures against religion, persecution remains real. And most authoritarian countries are sensitive to activities that appear to be directed against regime control. The main difference may be that Pyongyang, more than most other “hostile” states, sees potential political value in jailed Americans.

Still, while no American should want to end up in North Korean custody—the treatment of the seventeen detained in recent years has varied dramatically—there’s no reason any American should end up in North Korean custody. Indeed, several hundred Americans visit annually and don’t get arrested. There’s no evidence that the DPRK lures tourists to the North for the purpose of jailing them, as suggested by Warmbier’s understandably distraught father. (What happened to Warmbier remains a mystery; the medical examination discounted Pyongyang’s explanation but revealed no evidence of physical abuse.)

The North receives many visitors. Young Pioneer Tours, which organized the trip on which Warmbier traveled, pointed out that it had brought in more than eight thousand other travelers without incident. On my plane entering North Korea, I sat next to a British citizen who was making his third tourist visit. This time he was planning helicopter and microlight flights over Pyongyang. He was in a group made up of other veteran travelers, and introduced me to the tour company leader, who brought people in regularly. The worst trouble my seatmate had had was being told to delete photos deemed inappropriate.

A number of humanitarian groups, some explicitly religious, work in the officially atheist nation. When I went to breakfast on my first morning I heard Christian songs as I approached the common area on the way to the elevator. Several NGO staffers and volunteers, in the midst of a lengthy sojourn providing medical care, gathered for worship in the morning. They wore clothes with their organization’s name, drove vehicles with their logo on the sides and brought in medical supplies in boxes marked with the name as well. None had ever ended up in jail.

There also are quite a few Westerners making more official visits, like mine. Most have a higher profile in their home nations, including America, than the average tourist. But apparently none of them ever has been targeted.

In fact, arrests aren’t random but, in North Korea’s view, for cause. DPRK officials say they punish intentional, not accidental, rules violations. I chatted with the head of a Western NGO active in the North who explained that her group had looked into the cases of those jailed: all had committed some illegal act. That doesn’t mean their conduct warranted punishment. Neither do the North Koreans deserve the oppression visited on them. But visitors to the North are under its authority. By violating its laws, they singled themselves out.

Some had conducted evangelism or aided defectors. Discovery made their arrest inevitable, no matter how brave they were. Washington could urge their humanitarian release, but it couldn’t claim Pyongyang had no legal authority to punish them. It’s the same for Americans and other foreigners sometimes sentenced to death for smuggling drugs in other nations. The punishment is disproportionate, even outrageous, by America’s standards, but other states have full authority to impose it.

Warmbier’s case looks extreme even by North Korean standards. Other visitors have been caught trying to take home DPRK propaganda items, but were not jailed for doing so. Some knowledgeable Westerners suggest that his actual offense was more egregious and more humiliating for the North, a calculated insult to the North Korean system and Supreme Leader Kim Jong-un; the poster incident merely became the cover story. That would better explain Warmbier’s public “confession” and harsh sentence of fifteen years. But we are unlikely to ever know for sure.

The State Department warns against travel to the North, but Americans remain free to go. Now there’s a move in Congress to ban travel to the North. That’s a bad idea. A free society should protect the liberty to travel and explore. This right shouldn’t be limited without compelling justification. The fact that some tourists might make a mistake and get arrested isn’t a good reason for banning everyone else from going.

Moreover, visiting the DPRK has educational value. Those who spend time in North Korea are more likely to understand it. Since the U.S. government lacks a diplomatic presence, American visitors are the best alternative. Simply learning more about the system’s culture and operation, what motivates people, what they really think and how they relate to one another is worthwhile.

Going to the North also causes those living in free societies to better appreciate their systems. There really is nowhere else on earth like the North. Eritrea may be as brutally repressive, but the DPRK’s symbols and controls are more fully developed. People should see the system. On both my visits I more tightly clutched my U.S. passport as I left, thankful I lived in a society in which the will of more than one person mattered. Indeed, arriving in Beijing left me feeling like I had landed in a free country.

Americans also can teach much to North Koreans. The result might not be a libertarian revolution. But watching, meeting and especially working with people who don’t fit the official stereotype provide North Koreans with an education as well. My British friend met some of the same guides on a return visit, building relationships. Humanitarian workers talk of getting to know patients over time. Knowledge is transmitted, curiosity is aroused. Engagement is no panacea, but is more likely than isolation to encourage Pyongyang’s evolution in a more liberal and peaceful direction.