If China Doesn't Like THAAD, It Should Squeeze North Korea 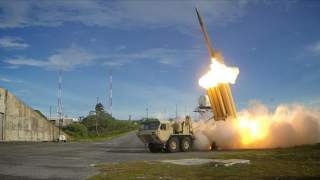 Beijing is agitated about the decision by the United States and South Korea to deploy the Terminal High Altitude Area Defense (THAAD) ballistic missile defense system. Although the principal impetus for the THAAD deployment seems to have been North Korea’s increasingly erratic and provocative behavior, Chinese leaders suspect that the system is at least indirectly aimed at their country. THAAD radars can scan deep into Chinese territory and the system’s overall capability to knock missiles out of the sky may pose a threat to the continued viability of China’s largely land-based nuclear deterrent.

Chinese officials are annoyed with Seoul’s acquiescence in the scheme that there is apparent consideration being given to economic retaliation. More paranoid types in the Chinese elite even believe that instead of facing two separate bilateral alliances led by the United States, China now confronts a united triangular alliance encompassing the United States, Japan and South Korea. That view is encouraged by speculative stories in the Western and other non-PRC news outlets.

There is no question that the THAAD deployment signals a cooling of relations between Beijing and Seoul. It reverses a multiyear trend that saw a concerted Chinese courtship of South Korean President Park Geun-hye. Yet Park has shown little enthusiasm for an overt anti-China policy. If anything, both her inclination and public sentiment in South Korea seemed more receptive to a frosty policy toward the former colonial master, Japan, than toward China. The extent of the friendly attitude toward China had been evident just months before the THAAD affair when Park ignored the advice of the United States to boycott the proceedings and traveled to Beijing to participate in China’s celebrations marking the seventieth anniversary of the end of the Second World War. Park was not only a participant in those celebrations, she was an especially honored guest, given the one of the two seats of honor next to Chinese President Xi Jinping. Russian President Vladimir Putin occupied the other. South Korea also disregarded pressure from the United States and joined the Chinese-led Asian Infrastructure Investment Bank.

The rising tensions between Seoul and Beijing do not necessarily mean that Chinese fears of a hostile triangular alliance are warranted, however. As yet, the degree of enhanced military cooperation between Seoul and Tokyo—the necessary third side of the triangle—seems very modest indeed. It consists of little more than a greater sharing of information. The underlying tensions between South Korea and Japan also show few signs of going away. Those tensions include a bitter territorial dispute over the Dokdo/Takeshima islands and Japan’s belated, half-hearted expressions of regret for the abusive nature of its colonial rule over Korea during the early twentieth century.

Japan has reason to be enthusiastic about the THAAD deployment. That was true even before North Korea’s latest missile test, which sent a ballistic missile of unprecedented range flying directly at Japan and landing perilously close to Japanese territorial waters. And since Japan’s defense white paper identifies China as an explicit threat to Japanese security, Tokyo might well like THAAD’s indirect potential benefits in degrading Beijing’s military power.

That underscores the probable differences in the motives of the three members of the supposed triangular alliance. The Japanese, and to a lesser extent the Americans, likely do see THAAD as having a dual role: intimidating China as well as guarding against a reckless missile launch by North Korea. For South Korea, though, THAAD is almost exclusively aimed at dealing with the latter problem. Few South Koreans want to alienate China or become an American–Japanese pawn in a geostrategic game directed against Beijing.

China’s response, therefore, should be readily apparent, and beating up on South Korea is not the proper one. Beijing’s best move would be to get extremely tough with its North Korean client, including taking direct action to remove the Kim regime from power, if necessary. Yes, there are risks involved in such a bold undertaking, including large-scale refugee flows into China. For that and other reasons, Chinese leaders have been reluctant to exert maximum leverage until now. But Pyongyang’s behavior has become ever more reckless and irresponsible. It is now endangering important Chinese security interests as well as the overall peace of East Asia. The message that these events should be sending to Chinese leaders is fairly direct. If you don’t like seeing THAAD deployed, then eliminate the justification for the deployment.

Ted Galen Carpenter, a senior fellow at the Cato Institute and a contributing editor at the National Interest, is the author 10 books and more than 600 articles on international affairs.