If Europe Really Worried About Russia, It Would Get Serious About Defense Spending 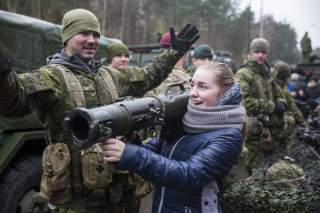 NATO leaders got acquainted with President Donald Trump this week. One can only imagine what they thought of the Donald. Their main objective was to reinforce the efforts of his aides to turn him into a traditional American cheerleader for European dependence.

For those seeking to revive an alliance created almost seventy years ago, in a vastly different time, Russia has resumed its role as the “necessary” enemy. The organization faded in relevance—indeed, lost its raison d’être—but recently reasserted its role as Europe’s guardian. Lt. Gen. Ben Hodges said the United States was returning troops to the continent as part of the “transition from assurance to deterrence.” Their “mission is to deter Russia,” he added.

Since Russia’s occupation of Crimea and intervention in eastern Ukraine there has been much fevered rhetoric about the Russian Threat. A Hitleresque Vladimir Putin was prepared to occupy the rest of Ukraine, swallow the three Baltic States, and sweep into Poland. Some analysts posited threats against Finland and the Nordic nations. Shrill demands arose for allied—and especially American—deployments along NATO’s border with Russia, as well as expanded alliance membership.

Yet the Europeans don’t fear a Russian variant of Blitzkrieg. Ignore what they say. Look at what they do. Moscow occupied Crimea in March 2014. That same year NATO Europe reduced its real collective military spending by one percent. In 2015 the same countries increased real outlays by just .5 percent. Last year the hike, heralded as a grand turnaround and harbinger of future increases, was an anemic 3.8 percent.

Last year NATO Europe devoted 1.47 percent of GDP to the military, up slightly from 1.44 percent in 2015. Before then the level had been falling steadily, from 1.69 percent in 2009. Only Estonia, Great Britain, Greece and Poland joined the United States above the NATO standard of two percent of GDP going to the military. Greece did so primarily in response to the perceived threat from fellow alliance member Turkey. Poland made it for the first time, and only through a bit of statistical legerdemain. Britain also tortured a few statistics to get over the two percent line. Estonia alone hit the mark while focused on Russia.

Belgium, Czech Republic, Hungary, Luxembourg, Slovenia and Spain all came in at about 1 percent or less. Germany, with Europe’s largest economy, was 1.19 percent. Latvia and Lithuania, supposedly in mortal peril, came in at 1.46 and 1.49 percent, respectively. France, with the continent’s most effective military alongside Great Britain’s armed forces, spent 1.79 percent of GDP.

We are moving in the right direction, alliance officials intone. In 2014 the members pledged to hit two percent by 2024.

Yet this is a curious policy if Russia really is poised to commit murder and mayhem across Europe. A cynic might conclude that the latest promise was designed to satisfy Washington rather than deter Moscow. Why spend money today when you can wait another seven years? And probably not have to make good on the commitment undertaken so long before.

Does anyone really imagine that Belgium and Spain are going to more than double their military outlays? That Germany, Italy and the Netherlands will almost do so? Last year nine countries either reduced outlays or had increases below one percent. Eleven had single digit increases. Of the five nations with double digit hikes, only one, Italy, has a substantial military budget. Germany, with the largest economy and military potential, increased outlays by just 3.16 percent.

Yet even Europe’s military laggards don’t see much reason to spend on the military. After all, they already spend far more on the armed forces than does Russia. Last year NATO Europe devoted an estimated $265 billion to defense, almost four times Moscow’s expenditures of $68 billion. The Russian Republic is not the Soviet Union reborn. Obviously, a collection of twenty-six nations won’t operate as smoothly as a single nation, and Russia’s armed forces likely achieve more “bang for the buck” in other ways. But a military colossus Moscow is not.

Russia can do great harm to its smaller neighbors, but Moscow’s performance against Georgia in 2008 was hardly inspiring. Even with subsequent reforms the Putin government could not successfully swallow Ukraine. A revived Red Army certainly won’t steamroller to the Atlantic.

Moreover, economically Moscow looks a lot like a paper tiger. While economics is not destiny, it is the foundation for military strength. Estimates vary, but the European Union has roughly thirteen times Russia’s economic strength. Germany, the United Kingdom, France and Italy all have larger GDPs than that possessed by Russia. Europe’s population is around three times as large. Even if Moscow conquered, how would it rule?

Set aside capability. More important, there is no indication that Putin is suicidal. What would he plausibly gain from starting a war that he could win only if the allies essentially chose not to fight, a wild gamble? The actions he took against Georgia and Ukraine were rational and measured. That he was not justified in doing so doesn’t change the fact that he believed he was responding to allied provocations, most dramatically the Western-supported street putsch against Ukraine’s elected, though corrupt, government, which leaned toward Moscow. He’s never shown any desire to assemble an empire and rule over non-Russians.

Of course, Putin’s Russia poses even less threat to America. The former looks a lot like the pre-1914 Russian Empire, concerned about border security and international respect, but with few aggressive designs elsewhere. Nowhere does Moscow threaten fundamental U.S. security interests. Europe remains safe. Georgia and Ukraine are a tragedy, not a danger for the United States. Washington might prefer not to confront Moscow when attempting to reorder the Middle East, but America long has exhibited the reverse Midas touch.

NATO succeeded brilliantly, allowing Europe to revive behind an American military shield. Now Europeans should take over responsibility for Europe’s defense. Let them decide whether there are threats against which they must defend.

Image: A Lithuanian girl holds a rocket launcher at a static display in Visaginas, Lithuania. Flickr/Department of Defense