If Russia Wants the Syria Mess, Let Them Have It 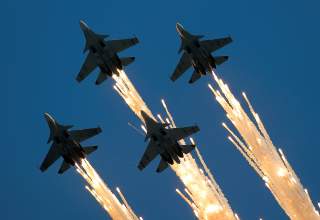 Relations between Moscow and Washington continue to deteriorate over a variety of issues. Contrary to the expectations of Americans who favor a more conciliatory policy toward Russia (and contrary to the fears of those who believe that a confrontational stance is necessary), the frigid bilateral relationship during Barack Obama’s administration has not warmed under Donald Trump. The new president retreated from indications he gave during the 2016 presidential election campaign that he would reconsider the economic sanctions that his predecessor imposed following Russia’s annexation of Crimea and Moscow’s support for separatist forces in eastern Ukraine.

Beyond the administration’s policy retreat, Congress is in a militant, anti-Russia mood. The Senate just voted 98-2 to impose additional sanctions on Moscow in retaliation to the Putin government’s alleged interference in America’s 2016 elections. An avalanche of vitriolic denunciations of Vladimir Putin and Russian behavior in general preceded that vote and have been a staple of the media for months. Russian officials are reacting with growing resentment and anger to Washington’s mounting displays of hostility.

On one issue, Syria, bilateral tensions especially are flaring to an alarming extent. That animosity has been building for years. Obama administration officials openly backed the Sunni-dominated insurgency that has waged a war for nearly six years to oust Bashar al-Assad’s religious-minority (Alawite, Druze and Christian) regime. Moscow deeply resented the U.S. position, since the Assad family has been a long-time Russian geopolitical client. After seething for more than four years about Washington’s intrusion into a country that the Kremlin regards as part of Russia’s rightful sphere of influence, Putin deployed military forces in 2015 to back the beleaguered Assad government. With U.S. military personnel already operating in Syria to assist selected rebel factions, that move created an inherently dangerous situation.

Matters have grown increasingly ominous. The most recent incident occurred just days ago when a U.S plane shot down a Syrian government fighter jet that was attacking U.S.-backed insurgents. Moscow responded with an announcement that it will now track coalition aircraft, including American planes, operating in Syrian airspace. That move was just one step short of threatening to shoot down any planes that seemed to be threatening Russian forces or their Syrian allies. The danger of a direct military clash between the United States and Russia over Syria is no longer the stuff of paranoid fantasies.

There are now two dueling policies regarding the bloody Syrian civil war. Moscow’s agenda is rather straightforward, if somewhat cold-blooded. The decision to send Russian forces into the conflict confirmed a determination to prop up Assad’s government. The Russians are concerned about two dangers if their besieged client falls from power. One risk is that Washington would become the leading outside player in Syria and move to eradicate Russian influence there and throughout the Middle East. The other well-founded worry is that radical Islamic elements will dominate any post-Assad government. That development would enhance the overall terrorist threat and boost hostile Muslim factions in Russia’s near abroad (especially the Caucasus and Central Asia) and even inside Russia itself.

U.S. leaders are—to put it mildly—indifferent to Moscow’s concerns. But while Russia’s Syria policy is straightforward and coherent, U.S. policy is a contradictory, incoherent mess. The Obama administration made it clear that Bashar al-Assad could not be part of any future Syrian government. At first, the Trump administration seemed inclined to reconsider that approach. Secretary of State Rex Tillerson initially indicated that Washington would no longer demand Assad’s removal. But just days later, a chemical attack occurred in rebel-held town. Trump immediately blamed Assad’s forces (despite conflicting evidence) and ordered cruise-missile strikes against the Syrian air base that Washington alleged was the source of the attack. Tillerson subsequently stated that Assad must leave office before any political settlement could occur (essentially a return to the Obama policy), only to say days later that the Trump administration’s policy had not changed and that regime change was not part of the agenda. By this time, intelligent observers could be excused if they were totally confused.

That is hardly the only manifestation of U.S. policy incoherence regarding Syria. Washington’s attempt to calibrate support so that it strengthens so-called Syrian moderates has led to multiple embarrassing episodes. The Obama administration’s program to identify and train moderate military units was a $500 million fiasco that produced only a handful of fighters—most of whom were promptly captured by or surrendered to their adversaries. Other ventures fared little better. At one point a CIA-backed Syrian faction apparently engaged in combat against another faction that the Pentagon supported. More recently, Washington has been caught in a dilemma as fellow NATO member Turkey attacked Syrian Kurdish units that were battling ISIS with American assistance.

Russia is especially mystified at the U.S. flirtation with factions that are anything but secular moderates. One of those groups is the Nusra Front, at one time Al Qaeda’s affiliate in Syria. Former CIA Director David Petraeus openly advocated U.S. military cooperation with that organization. Other de facto U.S. rebel allies display more than few signs of being Islamists rather than moderates—even given a broad definition of the latter term. Moscow’s fury reached a new level in the past few weeks as the United States has launched air strikes against militias allied with the Assad regime in southeastern Syria. Russia asserts that those forces were battling ISIS and other militant factions, and that Washington’s actions play into the hands of Islamic terrorists.

Both the Kremlin and the White House need to make serious moves to defuse growing tensions before a potentially cataclysmic clash takes place between Russian and American forces in Syria. The bulk of the changes must come from the American side.

The United States should defer to Russia regarding Syria policy. Moscow has far more significant security interests at stake in Syria and the broader Middle East. Northern Syria lies barely 600 miles from the Russian frontier. Syria is some 6,000 miles from America’s homeland. In the process of deferring to Russia, Washington would also off-load the responsibility and risks onto the Kremlin.

It is doubtful that any outside power can truly bring an end to the fighting in Syria, much less restore a stable, united country. Such intervention thus far has bred only resentment and terrorist retaliation. It is better if Russia incurs the risks and suffers the negative consequences of geopolitical meddling than if the United States does so. Syria could well become another Afghanistan for Russia. That would be tragic, but it is preferable to Syria becoming another Vietnam or Iraq for America. And continued U.S. meddling in Syria certainly is not worth triggering a new cold war—and perhaps a hot war—with Russia. Yet that is the perilous path our nation is following.