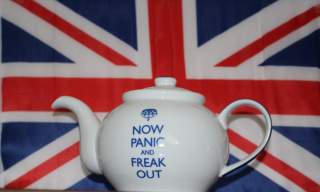 One doesn’t have to be trained as a social psychologist to figure out that the members of the contemporary chattering class are experiencing what could be described as “epoch envy” as they fantasize that they are living another Great Moment In History, and that they are chronicling it for posterity.

As a result, every political scandal is described now as a new Watergate that is about to topple another U.S. presidency, and any international crisis is analogized with the assassination of the Archduke Franz Ferdinand of Austria, signaling the dawn of another world war. At the minimum, we are going to reexperience the 1962 Cuban Missile Crisis.

It may not be surprising, therefore, that Britain’s vote to leave the European Union has been pronounced by members of the mainstream media to be the most significant event in post-1945 British political history, with global Armageddon around the corner.

Yep. Forget the 1956 Suez campaign, or the election of Prime Minister Margaret Thatcher and the global economic changes it brought about, or Tony Blair’s Iraq War fiasco and the geostrategic mess that it created.

Journalists and pundits are warning us that Brexit marks the collapse of the liberal international order and the end of globalism—not to mention what would happen if Donald J. Trump wins the presidential election; the curtain would then be brought down on the Age of Enlightenment! But not to worry, we’ll be here to report on all of that and make some sense out of it. There could even be a book or two after all that happens.

Indeed, there is nothing that gets the pundits’ juices flowing than pontificating about the Rise and Fall of This and the End of That. Punctured your car tire after running into that pothole on the road in Washington, DC? Well, that is clearly a sign that the era of American productivity, ingenuity and work ethic is over!

So, yes, the Brexit vote was a big deal. It reflected deep divisions in British society and politics about the direction of that country. And assuming that the UK would actually exit the EU, and that the usual political and bureaucratic muddling through wouldn’t end up with one of those all-too-familiar half-pregnant arrangements, like renegotiating British EU membership, the decision by a small majority of Brits to bid farewell to the continent was significant.

Brexit could provide political momentum to Euroskeptic movements in France, Holland and elsewhere, and embolden the separatists in Scotland and Northern Ireland. It could also lead to the worst-case scenarios in the form of the breakdown of the EU and the disintegration of the UK. And changes in the global balance of power could materialize, including the strengthening of the Germany as Europe’s hegemonic power.

Or not. Uncertainty may be unnerving the global financial markets. But sorry, guys, that’s the way Western democracies work. They tend to create a lot of chaos in the short run. But in the long run they prove to be the kind of environment where debates, followed by compromises, produce the least-worst outcomes.

And you cannot make those democracies work more effectively by getting rid of the irrational voters that have had the tenacity to question the wisdom of their supposedly wise elites. Those were the elites that have been responsible, after all, for much of the political and economic mess their nations have experienced, including the Iraq War, the global financial crisis and the rising flow of refugees into Europe. These voters were then forced to pay the bill for those mistakes.

Ironically, elite media outlets, like the Economist magazine, that not so long ago were not only celebrating the dawn of the post–Cold War liberal-democratic age, but also calling for the spread of democracy here, there and everywhere, from the Greater Middle East through Georgia and Ukraine to Mars and the rest of the galaxy, are now questioning the wisdom of the crowd as represented by the outcomes of free and democratic elections in Britain or, for that matter, the Republican presidential primaries.

The same journalists and pundits who once upon a time were hailing George W. Bush’s plan to “democratize” Iraq and promote the freedom agenda and numerous color revolutions around the world, and who were applauding the revolution on Tahrir Square and the ensuing Arab Spring, cannot stand it when their instrument of liberating the global masses, free and open elections, produce in places like Britain or the United States, not to mention Hungary, Slovakia, Hungary, Russia or Israel, electoral outcomes that seem to run contrary to their vision of the future. We are all elitists now!

In a way, there is something manic-depressive in the way Western punditry is now living history, as the utopian visions that followed the end of the Cold War and the collapse of the Soviet Union are being transformed into Spenglerian nightmare scenarios.

Indeed, not a day goes by in Washington now without a television talking head or a newspaper columnist warning us that the world is coming apart. In addition to Brexit and Trumpism, there are ISIS and terrorism, the disintegration of Iraq and Syria, resurgent Russia, the territorial disputes in the South and East China Seas, Iran, North Korea—and let’s not forget the danger of the spread of Zika.

The world, and in particular the Middle East, has never been more dangerous and more unstable than in the last few years, we are being warned 24/7. These are apparently all signs that we are on the eve of the apocalypse.

You could forgive millennials that may have not studied history for making such ridiculous observations. But what about those observers who have experienced, or at least read something about, the Second World War, the Cold War, the Korean War and the Vietnam War, as well as a series of devastating economic and political crises including the Great Depression, the social turbulence of the 1960s, the assassination of one U.S. president and the forced resignation of another? Is the world now really more dangerous and unstable than it has ever been?

The images of death and destruction from Syria and Iraq and the sites of recent terrorist attacks being splashed on the front pages of newspapers, on the television news and on the Internet are indeed horrifying. And the tensions between the West and Russia over Ukraine, or between the United States and its allies and China over a few disputed islands, and, yes, even Brexit, should certainly be causes for concern.

But apropos the Middle East and the tribal wars taking place there: recall, for example, that in 1973, Egypt, Syria and Israel were in a war that involved more than 1.5 million troops and close to twenty thousand casualties (and some of the largest tank battles in history), which ignited a dangerous confrontation between the United States and the Soviet Union and brought about the Arab oil embargo against the Western economies, which led in turn to the transformation of the global energy market. Now those were very, very dangerous times in the Middle East.

And if you're so worried about the ongoing diplomatic duels between Washington and Moscow, don't forget that during the Cuban Missile Crisis in 1962 the United States and the Soviet Union were on the brink of a nuclear war between the two that could have destroyed the entire planet. Now that could have been an apocalypse.

One reason for the-end-is-coming hysteria, which seems to be engulfing Washington these days, has to do with the impact of the 24/7 media environment, where we are blasted nonstop with reports on the many real and phony crises around the world, with bloggers who seem to have a lot of time on their hands bombarding us with pictures of men being beheaded, women being raped and a lot of dead children.

Another factor that has been driving this we’re-all-doomed mood may be political. Republican politicians and conservative pundits are trying to convince Americans that President Barack Obama is to be blamed for all the problems taking place around the world, and suggesting that if he only did “something” (they don't make clear what exactly they have in mind), stability will return to the Middle East, Ukraine and elsewhere.

But there is another, more complex explanation for the certain sense of helplessness that journalists, pundits and the rest of our so-called elites are feeling these days.

You can describe it as the Loss of the Unipolar Moment Syndrome, a certain nostalgia for the time when the United States, and the political and economic elites that its global influence spawned, felt unconstrained in their ability to influence decisions and impose their will at home and abroad.

All that seems to be changing now, as domestic political opposition and new and old global players are challenging the power of these elites who can no longer act as though they are the masters of the universe, and have to take into consideration the interests and concerns of other players. That hurts. But, hey, it's not the end of the world.