Iraq Will Survive ISIS. Will It Survive Its Own Politicians? 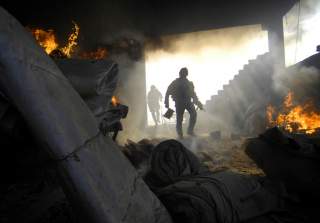 Almost three years ago, in June 2014, Abu Bakr al-Baghdadi and his band of bearded jihadist followers shocked the world by capturing Iraq’s second largest city in a matter of days. Pictures flooded the international airwaves showing a humiliated, desperate, tired and demoralized Iraqi army stripping off their uniforms, leaving their weapons behind and fleeing for their lives, never to look back. Some were lucky enough to get out of the area unscathed. Many were captured and executed on the spot. Indeed, in one of the most heinous crimes against humanity that the world has seen this century, hundreds of Air Force cadets were rounded up by Islamic State fighters plowing the area as they attempted to flee Camp Speicher, a military base on the outskirts of Tikrit. The Sunnis were told to go home and repent; the Shia recruits were sent on trucks, gunned down and dumped in mass graves.

The Iraqi army has come a long way since that terrible string of defeats. Aided in large part by the Obama administration’s decision to authorize a bombing campaign against the Islamic State, Iraqi troops and pro-government militia forces have managed to claw their way back from the dead. The amount of territory that the Islamic State controls and administers, roughly a third of Iraq in the summer of 2014, is down to about 7 percent. Mosul—the city that put the Islamic State on the international map and caused such panic that former Joint Chiefs of Staff Chairman Gen. Martin Dempsey warned President Obama during a limousine ride that the situation could go from terrible to catastrophic—is now surrounded by Iraqi counterterrorism forces in its last urban stronghold. Indeed, Baghdad’s forces are in the last stage of their campaign, driving into western Mosul’s Old City, one of the final three neighborhoods under the Islamic State’s control.

To say that the Mosul offensive has been a long and bloody slog would be an insult to the Iraqi troops and U.S. advisers tasked with retaking the city. Although the Iraqi government doesn’t release casualty figures to the public, estimates are that thousands have been killed and thousands more have been injured in the operation.

The five thousand to six thousand Islamic State militants responsible for defending the city (or at least making its recapture as difficult as possible) have been reduced to reportedly one thousand men. Nobody knows definitively how many civilians have been caught in the fighting (or deliberately targeted), but the Mosul operation has been just as arduous for them as it has been for the combatants; Moslawis have been killed by coalition bombs (a Pentagon investigation released last week found that a U.S. coalition airstrike in March was in part responsible for the death of 101 civilians), Islamic State snipers, explosives, suicide bombs, beheadings and any other manner of death that one could think of. According to Iraqi government statistics, 742,000 civilians have been displaced from the city and its environs over the last eight months. The violence has gotten so bad that a daily influx of ten thousand civilians have been streaming through the screening center established outside of the Mosul city limits.

There has been a lot of unpredictable elements in this war. Iraqi prime minister Haider al-Abadi and the U.S. commanders providing the bulk of the airpower in the campaign have at times underestimated the strength and resiliency of Islamic State fighters. Abadi predicted that his forces would capture Mosul at the end of 2016, an assessment that in reality was nothing but bluster meant for public consumption. The Islamic State has done a considerable amount of damage to the Iraqi army and militia forces, which have vastly outnumbered the organization. The fact that the Islamic State has managed to hold onto parts of Mosul for eight months is pretty impressive from a military perspective, even if the group’s methods are so barbaric and indiscriminate that it makes Al Qaeda look like a bunch of Boy Scouts.

What is predictable, however, is that Mosul will be retaken. Whether it in weeks or another month, we don’t know. But at this point, the Islamic State’s manpower is atrophied and its capability to administer anything in Iraq other than its day-to-day survival is limited. It’s only a matter of time before the Iraqi government’s writ is extended back to the city.

What is completely unknown is how the Iraqi government will behave once the Islamic State is vacated from Iraq’s population centers. We don’t need any reminders that one of the few reasons why the Islamic State was able to sweep into Iraq with such speed was because the Iraqi security forces treated the Sunni population with such contempt and suspicion that their retreat from western and northern Iraq was actually celebrated by Moslawis, Tikritis and Anbaris as the dawn of a new day.

If Iraqi political leaders across the sectarian divide don’t demonstrate leadership and begin to view collaboration, dialogue, inclusivity and political decentralization as assets rather than a threats to power, we may, in the future, be looking at an organization even more extremist than the Islamic State (if you can believe that) entering the same cities and towns and perpetrating the same atrocities. Except in this scenario, Iraq’s political class may not have the fortune of assuming that the U.S. military will scramble the bombers and prevent their government from falling.