ISIS Is Getting America Stuck in Iraq Again 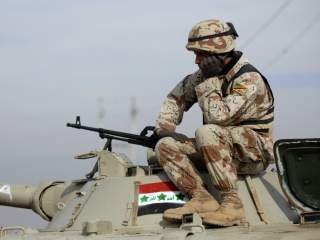 Around one month ago, I chronicled the exasperating reality of the U.S. military’s relegation to operational hand-holding in Iraq. Sure enough, as more time passes, the magnitude of the challenges therein is becoming clearer. Recent events like the (mostly peaceful and brief) occupation of the Iraqi parliament by followers of prominent Shia cleric Muqtada al-Sadr are illustrative of the political disarray gripping Baghdad. This disorganization has been an utter albatross in the campaign to clear the so-called Islamic State (ISIS) from the north and west of the country, particularly their stronghold of Mosul.

Unfortunately, the U.S. military is now being reluctantly dragged into sectarian squabbles as various regional leaders (i.e., those with tangible power in the area, unlike the government in Baghdad) jockey for control of specific territories. The United States thus finds itself trapped in the middle of messy combat politics without much leverage. The Obama administration’s justifiable reluctance to commit many thousands of troops to the mission of driving ISIS firmly back underground while stabilizing the country (effectively doing the Iraqi security forces’ job for them) means that this problem will persist for some time to come. This makes the current mission creep there that much more concerning, as there is little more than serious headaches and enormous financial burdens ahead.

Amongst other challenges, the United States is coming up short in the Iraqi public-relations arena. Incredibly, as much as one-third of the Iraqi civilian population believes that the United States is supporting ISIS or terrorism in general. Given the significant budget already devoted to positive messaging on the United States’ role in Iraq, its failure to make much headway amongst a general population long skeptical of its role there does not bode well for future diplomacy or security operations. That problem will only be exacerbated if the U.S. and Iraqi security forces are forced to further delay their beleaguered operation to retake Mosul from ISIS. There is a growing recognition that any tactical military gains in ISIS-controlled territory will be for naught without the strong domestic political and institutional support needed to ensure the area doesn’t regress into the fractured tribalism that allowed ISIS to thrive in the first place. Policymakers and military leaders in Baghdad and Washington are thus left with the extremely unappetizing options of either leaving the citizens of Mosul languishing under Islamic State control or moving forward with the liberation of the city without any coherent plan for governing it thereafter.

This raises a number of questions about the U.S. military’s role in the country in the near-term future. Its ostensible mission is to “advise and assist” the Iraqi government security forces so that they can take over full responsibility for internal security and the fight against ISIS. But historical precedent illustrates that this will be an interminable task. One need only look at the images of ISIS fighters using U.S.-supplied Iraqi military gear easily captured in their Mosul offensive to see that the considerable time and effort already devoted to this mission between 2003 and 2011 already appears wasted. Pair those images with the reports from the military advisors in the country of the Iraqi troops’ incredulousness at the idea of Iraqis, not Americans, leading the ground offensive against ISIS, and the mission becomes even more unpalatable. Can we expect the current training mission to be any more effective or expedient than the previous eight-year effort? Even if it successfully produces more competent and efficient Iraqi security forces, can the various political factions agree enough to form a central government which can effectively manage and direct them? (All signs point to “no,” or at least not anytime soon.)

The odiousness of ISIS and the inherent moral clarity of the campaign against it have allowed the Obama administration’s steady troop buildup in Iraq to continue relatively unabated. But as these U.S. troops become more involved in the fight and combat casualties continue to mount, questions about a viable exit strategy will undoubtedly begin to flow in earnest. Indeed, as recently as the end of March, lawmakers on Capitol Hill were pushing administration officials in charge of overseeing the anti-ISIS campaign for answers on this front. The answers from retired Gen. John Allen were not promising. When the best answer of the official in charge of overseeing the coalition efforts against ISIS is, “There’s no exit strategy for this. This is about dealing with Daesh [an Arabic name for ISIS]. This is about defeating Daesh. The success of the strategy is not about exit,” there is considerable cause for concern.

Achieving stability in Iraq will be a quandary for the rest of the Obama presidency and well into the next administration. The United States cannot be too singularly focused on the elimination of one single terrorist pseudo-state without addressing the systemic issues which begat it. Policymakers should understand that the current mission to “degrade and ultimately destroy” ISIS is most likely to succeed in pushing it back underground in Iraq, rather than effectively eliminating it (as it expands elsewhere in places like Libya and Afghanistan). Iraq will still be an extremely volatile place with political instability borne of mismanagement, ethnic and sectarian division, and a depressed economy. The sooner policymakers start working on answers to the challenges in addressing these issues, and evaluating whether the American public even has the faintest appetite for that commitment, the better.

Image: An Iraqi army soldier takes a moment to reflect during a mission in the Meshahadah province of Iraq​. Wikimedia Commons/U.S. Air Force