Israel and Palestine Can Move Forward—But Not with Idealists 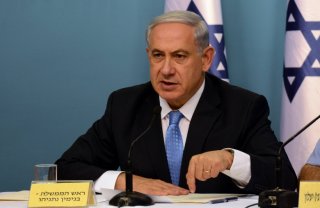 In addition being America’s glorious capital, Washington, DC is a town jam-packed with think tanks of all ideologies and political persuasions. The men and women who work in them, often categorized in the news media as former government officials and ivory tower academics, churn out dozens of reports on a weekly basis on every topic under the sun—from welfare and immigration reform to changes in the National Security Council.

Many of these reports are published without much notice from the general public. But there are some that are so important that they deserve to be recognized. An exhaustive study from the Center for a New American Security, titled “Advancing the Dialogue: A Security System for the Two State Solution,” is one such report.

As the title suggests, the study—a joint project from Ilan Goldenberg, Maj. Gen. Gadi Shamni, Dr. Nimrod Novik and Col. Kris Bauman—attempts to answer one of the very questions that has contributed to a stalemated Israeli-Palestinian peace process since the Oslo Accords over twenty years ago. That question is this: is there a formula that can meet Israel’s national security needs, but can also provide the Palestinian people with a sense that Israel’s presence in the territories is coming to an end?

As the authors argue, there is indeed a plan that can straddle the balance. However, it requires the U.S. military to be proactive in any peace settlement, serving as both an overseer of the Israeli withdrawal process from the West Bank and as a third-party backstop in the Jordan Valley.

Because the study is so detailed and its recommendations are so specific, I encourage you to read it in full. But the bottom line is poignant, if not obvious. If the Israelis and Palestinians are courageous enough to meet one another halfway during a negotiating process, a strip of territory in the Middle East that has experienced such violence and hate over the past century can transition into a brand new era of peace, productivity and prosperity. The $64,000 question that the CNAS report does not answer—and cannot answer—is whether Israeli Prime Minister Benjamin Netanyahu and Palestinian Authority President Mahmoud Abbas can authorize a third round of peace talks.

Since Secretary John Kerry’s valiant yet unsuccessful effort collapsed twenty-six months ago, there has been no movement towards getting a conflict-ending mediation process started. President Barack Obama—who made that famous speech in Cairo in what seems like a lifetime ago—understood upon taking office that the Middle East’s oldest conflict would only get worse if Washington did not make it a foreign policy priority. Unfortunately for President Obama, he learned that no amount of U.S. cajoling and inspiring speeches would be enough to compensate for the unwillingness or stubbornness of Netanyahu and Abbas to strike an agreement. Secretary Kerry, despite his confidence and faith in what diplomacy can achieve, came to the same conclusion the hard way when the Israelis in 2014 refused to release the last batch of Palestinian prisoners in their custody and Mahmoud Abbas signed a unity deal with Hamas.

Prime Minister Netanyahu’s coalition government has traveled further to the right with the inclusion of Avigdor Lieberman as defense minister, so the prospects of any comprehensive agreement that would elicit Oslo-like excitement isn’t in the cards. But Netanyahu and Abbas nonetheless have the power to make unilateral moves that, when taken together, have the potential of keeping the tension down and preserving the idea of a two-state solution. For the Israelis, this could include more work permits for Palestinian laborers in Israel; increased shipments of cement into Gaza in order to expedite the reconstruction of homes that were destroyed two years ago during the Israel-Hamas war; less frequent Israeli raids in major Palestinian cities; and more economic development and opportunity for Palestinians in Area C.

For the Palestinians, good-faith measures would include a clamp down on the type of incitement that encourages young men and women to attack Israelis with knives; dropping international resolutions that seek to embarrass Israel in the UN Security Council and the International Criminal Court; a reaffirmation that the Palestinian Authority will establish full normalization and diplomatic relations with the State of Israel immediately after a final settlement to the conflict is reached; and a visible demonstration to the Israel Defense Forces that terrorists suspected of planning or orchestrating attacks against Israeli targets are arrested and prosecuted without delay.

As the authors of the CNAS report note, “both sides are deeply disillusioned and trust is nonexistent, especially among Israeli and Palestinian leaders but also among their people.”  Rebuilding that trust is painstaking work. But it’s absolutely necessary if Israelis and Palestinians wish to live next to one another, side by side, a peace that goes beyond an interim calm.