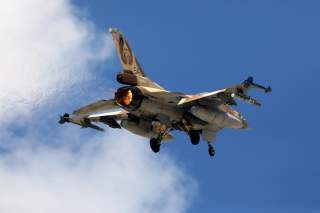 During a trip to the Israel-Syria border in the Golan Heights on February 6—after commiserating with the Israeli military officers defending the frontier and inspecting the equipment—Israeli prime minister Benjamin Netanyahu delivered a warning through the press to the Iranians, the Assad regime, Hezbollah, the Islamic State and any other actor on the Syrian battlefield that sought to challenge the Jewish state. Israel, Netanyahu assured, wants peace for everybody in the region. But if anyone dares attack Israel in any way, “we are prepared for any scenario, and I do not suggest anyone test us.”

Apparently the Iranians didn’t get the message. Or maybe they just waved it away, calculating that Netanyahu would not risk a wider regional war by retaliating in such a forceful fashion. Iran’s Revolutionary Guard Corps was proved wrong shortly after, and they discovered it the hard way.

After an Iranian drone crossed into Israeli airspace at approximately 4:30 in the morning on February 10, an Israeli attack helicopter shot it out of the sky. But the Israelis weren’t done; eight fighter jets were scrambled and entered Syrian airspace, neutralizing a Syrian military base where the drone was reportedly being piloted. Syria’s antiaircraft system managed to shoot down one of the planes, the first time an Israeli fighter was downed by an enemy force since the 1980s. Fortunately, the Israeli pilots ejected, sparing Netanyahu’s government from having to organize a state funeral for their service members. The lack of fatalities, however, didn’t restrain the Israelis from taking further action. By the time the day was over, a dozen additional sites in Syria, including four Iranian targets, were hit.

Shocked that the Israelis and the Iranians, two mortal enemies in the Middle East, would be taking potshots and testing one another’s red lines? You shouldn’t be. The way things in Syria were heading, it was only a matter of time before the two countries would engage each other directly.

Throughout Syria’s seven years of civil war, Netanyahu has reminded anybody within earshot of a television that Israel would not cow in the face of danger emanating from Syria’s conflict. Netanyahu’s policy is one of no nonsense. The nonsense that does occur is dealt with rapidly and forcefully. If a mortar strays into the Golan Heights, Israel sends a burst of artillery fire in return. If Israeli intelligence discovers a shipment of SA-17 antiaircraft weapons traveling in a convoy destined for Hezbollah, the Israeli Air Force will find, fix and destroy the convoy. If the Assad regime is caught producing chemical munitions, the production plant will be bombed. And in a scenario where the Iranians construct a military base southwest of Damascus, Israeli pilots will be given the order to destroy the facility—or at least severely damage it.

It’s not as though Syria’s power brokers didn’t see this coming. The extent of the Israeli countermeasures in Syria were certainly larger than previous operations. We are not, after all, talking about dropping a bomb on a small, selective target like an unguarded Hezbollah convoy treading from point A to point B. Instead, we are talking about goals that include hitting a multitude of sites—like the T-4 military base near the Syrian city of Palmyra—that have air defenses on location. As professional and talented as the Israeli Air Force is (and they are indeed the very best in the region, bar none), the operation was not an easy one to conduct. If it were, Israel would not have lost an F-16 on its trip back to base.

And yet despite the costs and the risks, Israel nonetheless conducted the operation. Israel, unlike Iran, Russia and Turkey, does not have a stake in picking winners and losers in the Syrian Civil War. But it does have an overriding national-security interest in ensuring Tehran is not able to exploit its power over the Assad regime to consolidate and then expand a permanent Iranian military presence within Syria’s borders. In fact, with the exception of stopping advanced weapons from being transported into Hezbollah’s arsenal, throwing a wrench into Iran’s plans is the only national-security interest Israel possesses in the Syrian space. Netanyahu has elucidated that interest repeatedly. In talks with Russian president Vladimir Putin and U.S. president Donald Trump, in public appearances at think tanks in the West, and through intermediaries who are in contact with Bashar al-Assad, the Israeli premier has stayed on script and hammered the point home: if Tehran attempts to convert Syria into another Lebanon, Israel will be forced to use military force to prevent that disaster from happening.

Earlier this month, the Israeli government operationalized the concept. The strikes in Syria demonstrate to Iran, Assad, Hezbollah and any other anti-Israel party that Israel has red lines it will enforce.

As Israel’s closest military, intelligence and political ally in the region, the United States will undoubtedly have a role. In the present circumstances, the wisest course for the United States is not to join Israel in the bombing, but to assist the Israelis in de-escalating the violence and pressing all parties—Israel, Iran, Assad and Russia—towards restraint.

While Washington has very little, if any, influence on the Assad regime and Iran, it should be able to send missives to Moscow to prevent an Iranian or Syrian counterattack on Israeli territory. If anything, Putin has an even greater interest in lobbying for de-escalation than the United States, given that Russian military personnel are stationed in some of the very bases that would be targeted during an escalation. The last thing the Russians want is for their three years of military investment in support of Damascus to be cancelled out by more Israeli airstrikes.

With the U.S.-Russian bilateral relationship in such bad shape, it is increasingly difficult to pinpoint any commonalities between Washington and Moscow. Nipping an Israeli-Iranian confrontation in Syria in the bud, however, is an objective both states should be able to work on.