It Is Now Trump’s Job to Protect U.S. Elections 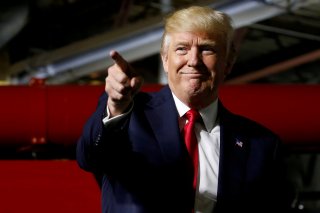 The blockbuster Washington Post story detailing the Obama administration’s reaction to Russian meddling in the 2016 presidential election continues to make news. There is now clear and convincing evidence of a concerted Russian effort to influence the 2016 presidential election. The story concentrates on President Obama’s actions. We should also ponder what President Trump would have done differently.

Much of the chatter has focused on an unnamed senior Obama administration official who said of the White House’s response, “It is the hardest thing about my entire time in government to defend.”

The story and the reaction to it poses a unique challenge to President Trump. At times, he has adopted a cavalier approach to the question of Russian interference. In one bizarre instance in late July, he appeared to call on the Russians to release Hillary Clinton’s missing emails.

The Trump campaign quickly clarified the candidate’s remarks, and for the most part Donald Trump has simply denied the allegations. As recently as last Thursday, the day before the Post story dropped, the president dismissed the U.S. intelligence agencies’ claims of Russian interference as a “big Dem HOAX” and “a big Dem scam and excuse for losing the election!”

The Washington Post story should put such claims to rest.

It is also now clear, in retrospect, that the Obama administration did make some serious errors. The supposition that Russia had escalation dominance in this instance was particularly wrongheaded. Although the Russians are weak, they do have an advantage over the United States in matters and places of vital interest to them (in the countries along Russia’s border, for example). But the sanctity of the U.S. electoral process is a vital U.S. interest.

I don't think, however, that this mistaken belief that the Russians could and would do more harm to us than we could do to them is the most important part of the story.

The passage below stuck out to me:

[Obama administration officials] worried that any action they took would be perceived as political interference in an already volatile campaign. By August, Trump was predicting that the election would be rigged. Obama officials feared providing fuel to such claims, playing into Russia's efforts to discredit the outcome and potentially contaminating the expected Clinton triumph.

In other words, they weren’t mostly worried about the Russian reaction, but rather the American one.

That is also Donald Trump’s interpretation:

“The reason that President Obama did NOTHING about Russia after being notified by the CIA of meddling is that he expected Clinton would win,” he tweeted on Monday.

Obama, Trump continued, “did not want to ‘rock the boat.’ He didn't ‘choke,’ he colluded or obstructed, and it did the Dems and Crooked Hillary no good.”

You can fault Obama et al for being overconfident of a Clinton victory. But it seems more than plausible that Trump supporters would have interpreted the public revelation of Russian hacking in August or September as further evidence that the election was rigged against Trump—especially if the revelations came from the Obama administration, or anyone deemed to be a Clinton partisan, for that matter.

For the most part, this is water under the bridge. The investigations of senior members of Trump’s campaign and their ties to Russia (and other foreign countries) will continue, but these will not undo the results of the 2016 election. Now Trump owns the problem. He is the president. What is he doing to prevent Russian interference in future U.S. elections?

The obvious answer isn’t the most important one. The sanctity of the vote must be protected. That includes hardening electronic voting machines against cyber attack, but also protecting voter registration rolls and anything pertaining to the election process. Changing a vote from “Candidate Smith” to “Candidate Jones” would be the most serious sort of hack. But imagine the chaos that could ensue if one out of every ten names on a voter registration list at your local polling station strangely disappeared? Those lines snaking through the elementary school gym could get really long as harried poll workers fumble through pages and pages of names and addresses.

I am far more concerned, however, about the quality and reliability of information that pertains to elections, in other words the body of information that Americans rely upon to decide which candidate they choose to vote for. If a demonstrably false story convinces a voter to support “Candidate Smith” over “Candidate Jones,” is that far less serious than a computer program that randomly changes votes after they are cast?

We have ample reason to question the reliability of information today. And it isn’t all because of the Russians. I am aware of no evidence suggesting that Vladimir Putin is behind Alex Jones’s most outrageous allegations (e.g. the one that says the Newtown shooting was a hoax). The man who concocted the story of “tens of thousands of fraudulent Clinton votes found in an Ohio warehouse” didn’t live in St. Petersburg or Moscow. He was a twenty-something-year-old American just trying to make a quick buck. I don’t believe that the Russians planted the Pizzagate story (though it is troubling that Mike Flynn’s son was peddling the tall tale long after it was proved false).

Snopes.com isn’t enough—though it should be bookmarked for any time you encounter a story that doesn’t seem quite right. If President Trump doesn’t want to be accused of “choking” when evidence of foreign interference casts doubt on American democracy, he should be willing to call out blatant misinformation whenever it occurs. Short of that, he should stop accusing fact checkers and reputable news organizations of peddling “fake news.”