Is it Time for America to Quit NATO? 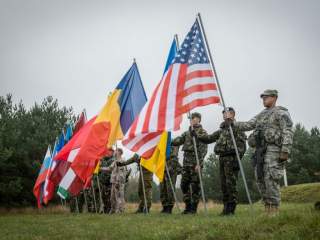 NATO will celebrate its sixty-seventh anniversary in April. Instead of being an occasion for the usual expression of mind-numbing clichés about the alliance’s enduring importance both to U.S. security and world peace, it should become an opportunity for a long overdue assessment of whether the NATO commitment truly serves America’s best interests in the twenty-first century. There is mounting evidence that it does not.

The creation of NATO in 1949 represented the most explicit break with America’s traditional policy of avoiding foreign alliances and generally charting a noninterventionist course. Being drawn into two major wars in little more than a generation—and especially the psychologically devastating attack on Pearl Harbor—had struck a fatal blow to a noninterventionist foreign policy. Even prominent noninterventionists such as Sen. Arthur Vandenberg (R-MI) now conceded that the world had changed and that “isolationism” (a poisonous misnomer) was no longer an appropriate policy for the United States. Joining NATO, the ultimate “entangling alliance” with European powers, confirmed the extent of the shift in Washington’s policy and American attitudes.

It was hard to dispute the argument that the world had changed. There was no semblance of a European or a global balance of power in the late 1940s or early 1950s. Central and Eastern Europe were under the domination of the Soviet Union, a ruthless totalitarian power that posed an expansionist threat of unknown dimensions. Western Europe, although mostly democratic, was badly demoralized from the devastation of World War II and the looming Soviet menace. Even prominent noninterventionists such as Sen. Robert A. Taft (R-OH) were not prepared to cut democratic Europe loose in such a strategic environment. He merely wanted to offer the Europeans a security guarantee without having the United States take the fateful step of joining NATO and assuming virtually unlimited leadership duties for an unknown length of time. Subsequent developments validated his wariness.

NATO partisans insisted that the world had changed with World War II and that the new paradigm required extensive U.S. leadership. The problem with their analysis, especially as the decades have passed, is that they seem to assume that change is a single major event and everything thereafter operates within the new paradigm. But that assumption is totally false. Change is an ongoing process. Today’s Europe is at least as different from the Europe of 1949 as that Europe was from pre–World War II Europe. Yet the institutional centerpiece—NATO—and much of the substance of U.S. policy remain the same.

The entire security environment is different. Instead of being a collection of demoralized, war-ravaged waifs, the European democracies are now banded together in the European Union, with a population and collective gross domestic product larger than that of the United States. Although they are troubled by the turbulence in the Middle East and the occasional growls of the Russian bear, they are capable of handling both problems. Indeed, Vladimir Putin’s Russia is a pale shadow of the threat once posed by the Soviet Union. The European Union has three times the population and an economy nearly ten times the size of Russia.

The primary reason that the EU countries have not done more to manage the security of their own region is that the United States has insisted on taking the leadership role—and paying a large portion of the costs. As a result, the United States spends nearly 4 percent of its GDP on the military; for NATO Europe, the figure is barely 1.6 percent. That disparate economic burden is only one reason why we need to conduct a comprehensive review of whether the NATO commitment serves America’s interests any longer, but it is an important one.

The European security environment has changed in another significant way since NATO’s creation. During the early decades of the alliance, Washington’s goal was to preserve the security of major players, such as West Germany, Italy, France and Britain. Since the collapse of the Soviet Union in 1991, though, U.S. leaders have pushed for the expansion of the alliance into Central and even Eastern Europe, adding marginal allies with the casual attitude that some people add Facebook friends.

But unlike Facebook, military alliances are deadly serious enterprises. NATO, with its Article 5 commitment pledging that an attack on one member will be considered an attack on all, could easily entangle the United States in an armed conflict that has little or nothing to do with America’s own security. The absurdity of NATO in the twenty-first century may have reached its zenith in February 2016 when, with Washington’s enthusiastic backing, the alliance admitted tiny Montenegro as a member. In the post–World War II decade, when the United States broke with its traditional noninterventionist policy, proponents of the new approach argued that alliances would enhance America’s security. How a microstate like Montenegro could augment America’s already vast military power and economic strength would seem to be a great mystery.

But at least Montenegro does not have any great-power enemies. The same could not be said of three other small members, the Baltic republics of Estonia, Latvia and Lithuania, which were admitted a decade ago. They are on frosty terms with Russia, and a leading think-tank study indicates they are so vulnerable that Russian forces could overrun them in a matter of days. So, we have gone from an alliance commitment to protect crucial economic and strategic players against an ominous totalitarian superpower to putting America’s credibility, and perhaps its very existence, on the line to protect a collection of tiny players on Russia’s border. Indeed, the buildup of U.S. forces on Russia’s western frontier has contributed significantly to the deterioration of bilateral relations.

It would seem that NATO partisans are the ones who don’t appreciate the role of change in international affairs. To them, preserving the alliance, not maximizing America’s security and well-being, is the highest priority. We should not accept such static thinking. Sixty-seven years is a long time for any policy to remain intact and try to remain relevant. America’s NATO policy is increasingly failing the most basic tests of relevance and prudence. It is well past time to conduct a comprehensive review and consider even the most drastic option: U.S. withdrawal from the alliance.

Ted Galen Carpenter, a senior fellow at the Cato Institute and a contributing editor at the National Interest, is the author of ten books on international affairs, including several books on NATO.