Is It Time to Expel Turkey from NATO? 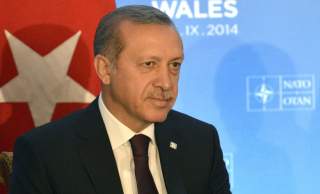 Turkey’s rash action in shooting down a Russian plane that apparently violated Turkish airspace for no more than 17 seconds is only the latest incident that should set off alarm bells in other NATO capitals.  Ankara’s reckless belligerence was exceeded only by its hypocrisy.  Turkish planes violated the airspace of Greece more than 2,000 times in 2014 alone, and 2014 was a typical year for such incidents.  Greek officials have long complained that their country must devote a considerable portion of its defense budget to intercept aircraft engaging in such violations.  Fortunately, though, Athens has never emulated Turkey’s standard and blasted offending aircraft out of the sky.

The incident with Russia is worrisome.  Fortunately, Vladimir Putin’s government has responded thus far only with economic sanctions.  But Putin also has made it clear that a repetition of an attack on Russian planes operating out of Syria could lead to far more serious consequences.  That possibility is not merely a matter of academic interest to other NATO countries.  Article 5 of the North Atlantic Treaty obligates its signatories to regard an attack on one member as an attack on all.  Sorting out whether a future incident is a case of Russian aggression or a Turkish provocation and overreaction could be more than a little difficult—and entail potentially dire consequences.

The reality is that Turkey is an irresponsible loose cannon.  NATO is supposed to be an alliance of peaceful democracies.  Yet evidence continues to mount that Turkey fails to meet either standard.  At best, the country is now what analyst Fareed Zakaria termed an “illiberal democracy”—a state that has periodic elections but where reliable protections for dissent are lacking and the political process is rigged in favor of the incumbent regime.  That term accurately describes Turkey.  The government of President Recep Tayyip Erdogan has increasingly harassed and imprisoned journalists and other critics. Just in the week leading up to the country’s national elections in November, authorities seized three television stations operated by opponents of the regime.  Ownership was then transferred to Erdogan allies, who spent the final days before the election inundating the airwaves with “news” stories and editorials praising the president and his political party.

Such conduct is strikingly similar to the authoritarian measures of Putin’s government.  Another similarity to Russia’s behavior is the policy toward weak neighboring countries.  The Kremlin has received justifiable condemnation for its actions in both Georgia and Ukraine.  Moscow used the 2008 war against Georgia to detach two restless regions, Abkhazia and South Ossetia, and convert them into quasi-independent Russian protectorates.  And, of course, the Putin government annexed Crimea from Ukraine and has supported separatist forces in Ukraine’s Donbass region.

But long ago, Turkey engaged in even more blatant aggression against a small neighbor.  In 1974, Turkish troops not only invaded Cyprus, they proceeded to occupy some 37 percent of that country and expel the Greek Cypriot inhabitants.  Ankara then established a puppet state, the Turkish Republic of Northern Cyprus, in the occupied territories, and over the years has flooded that entity with settlers from the Turkish mainland.  It is a little awkward for the Western powers to condemn Putin’s actions in Georgia and Ukraine when a NATO member is guilty of similar conduct.

But it is Ankara’s duplicitous policy regarding ISIS that should be the final straw for the rest of the NATO alliance.  Turkey, along with Saudi Arabia and Qatar, were major supporters of the Sunni groups that eventually coalesced to form ISIS.  Much of the military hardware that ISIS fighters have at their disposal is because of such generosity.  Even when it became apparent that ISIS had become a Frankenstein monster with its own agenda, Ankara has been less than committed to combating the organization.  Indeed, Turkish military actions seem more focused on weakening Kurdish forces in both Syria and Iraq than going after ISIS.  Worse, Turkey has allowed ISIS to ship oil from northern Syria into Turkey for sale on the global market, thus providing a major source of continuing revenue for the terrorist movement.  Moscow has charged that the reason Turkey shot down the Russian plane is because Russia’s military actions in Syria were disrupting the oil flow, and that accusation may well be accurate.  Indeed, evidence has emerged that Erdogan’s son is involved in the illicit oil commerce.

It is bad enough for NATO to be expected to support a reckless, aggressive ally that could embroil other members in a catastrophic war with a nuclear-armed power.  But it is even worse when that “ally” shows unmistakable signs of being a fifth column that is aiding and abetting the enemy the alliance has pledged to destroy.  It is time for the United States and the other NATO members to conduct a sober assessment of its so-called Turkish ally.  And serious consideration needs to be given to expelling that country from NATO.

Ted Galen Carpenter, a senior fellow at the Cato Institute and a contributing editor to The National Interest, is the author of ten books and more than 600 articles on international affairs.  His latest book, co-authored with Malou Innocent, is Perilous Partners: The Benefits and Pitfalls of America’s Alliances with Authoritarian Regimes (2015).