It’s Time to Ask the Hard Questions on Afghanistan 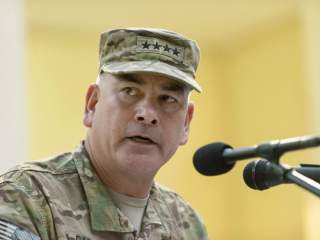 General John F. Campbell, commander of U.S. Forces in Afghanistan, recently held a press conference in which he told reporters that he hoped the president would not reduce the number of U.S. troops there from 9,800 to 5,500 by the end of 2016. “My intent would be to keep them for as long as I can,” he said. What the general didn’t say is what he hoped he’d be able to accomplish by keeping those 4,300 troops that he couldn’t without them. The implication—though he is careful to avoid explicitly saying so—is that his strategy will have a better chance of success if he keeps those troops. Evidence strongly refutes this unstated hope. Yet as is all too often the case, Western media organizations fail to ask General Campbell hard questions.

The facts are that the security situation has continued to deteriorate in Afghanistan whether there were 140,000 U.S. and NATO troops or the current number of approximately 13,000. The Taliban are stronger than at any time since 2001. There is now an Islamic State presence in Afghanistan. The threat posed by Al Qaeda has also risen to a post-2001 high. After the 2014 corrupt national election, the Afghan government remains divided and ineffective; their economy has not recovered from the loss of billions from supporting so many NATO troops.

In his interview, General Campbell said, “If I don't believe that we can accomplish the train, advise and assist and the (counter-terrorism) missions, then I owe it to the senior leadership to come back and say, 'Here's what I need.' If that's more people, it's more people.” Yet I can find no evidence any reporter asked the general what difference it would make to American strategic interests if 4,300 US troops redeployed or stayed.

Part of the reason for this lack of journalistic curiosity lies is because it is self-evident that U.S. Special Operations troops are highly proficient in their craft, and thus 9,800 troops could conduct a greater number of tactically effective missions than 5,500 could. But this is the United States we’re talking about, not some infantry battalion. Actions at the national level have to be concerned with strategic results, not merely whether they’re tactically effective or not. The distinction is not merely academic.

U.S. military and administration officials can—and often do—tout the tactical effectiveness of given actions or deployments. But what is the benefit to the country if we produce the most superior tactical results known to man if the U.S. suffers operational and strategic failure as a result? As graphically demonstrated above, in every important metric the strategies we’ve employed over the past fifteen years in Afghanistan have been abysmal failures: American national security has worsened and insurgent and other violent groups have grown in strategic effectiveness. This is not just my personal opinion. Even the Department of Defenses’ (DoD) own report admits the failure.

Released last month, the DoD’s curiously named “Enhancing Security and Stability in Afghanistan” reported that in the second half of 2015 the Taliban’s resilience:

“demonstrated their resolve to continue fighting. The elevation of Haqqani Network leader Siraj Haqqani as Taliban leader Mullah Mansour’s deputy signals that the Haqqani Network will remain a critical and lethal component of the overall Taliban-led insurgency. The presence of the Islamic State of Iraq and the Levant (ISIL) – Khorasan Province (IS-KP) primarily in the eastern province of Nangarhar remains a concern for the Taliban, the Afghan government, and the international community.”

The document states U.S. strategic objectives in Afghanistan are “focused on the defeat of Al Qaeda and its associates, protecting U.S. forces, and preventing Afghanistan from becoming a safe haven for terrorists to plan attacks against the U.S. homeland and U.S. interests and partners.” Yet clearly after fourteen full years of effort, the expenditure of $686 billion and the loss of 21,914 U.S. personnel killed and wounded, our tactical efforts—all of which have been individually successful—have together failed to attain our most important strategic objectives.

General Campbell is scheduled to testify before Congress early in 2016 on the situation in Afghanistan. It is time for members of both the media and Congress to begin asking the hard questions of America’s most senior military and Administration officials. It’s not enough for these leaders to tout tactical success and the professionalism of our armed service members. At the national level the only thing that counts is strategic success. It’s time we started holding our leaders accountable for their ability to accomplish their assigned missions.

Daniel L. Davis is a widely published analyst on national security and foreign policy. He retired as a Lt. Col. after 21 years in the U.S. Army, including four combat deployments. The views in these articles are those of the author alone and do not reflect the position of the U.S. Government. Follow him on Twitter@DanielLDavis1.