It's Time for the Real Questions on Candidates' Military Plans 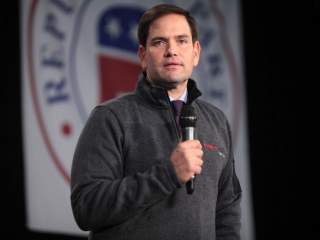 Late last month in the National Interest, Dov Zakheim posed some tough questions to GOP-frontrunner Donald Trump regarding national security strategy and military spending. The rest of the field shouldn’t be let off the hook, however. While Trump flubbed a question on the nuclear triad in the last Republican debate, raising precisely the sort of concerns that Zakheim wonders about, the other candidates have also staked out positions on national defense, or made claims about the current state of the U.S. military, that deserve greater scrutiny. Military Times assembled a few of each candidate’s positions in this illustrative graphic. It’s a good start. But can all of them—or any of them—describe their plans for the Pentagon without resorting to canned talking points or position papers drafted by their staffs?

How, for example, would each answer the following?

1) For starters, do you believe that U.S. military spending is too high, too low or about right? Polls suggest that Americans are evenly divided on this question. If you believe the United States spends too much, what is the right amount? If you believe we spend too little, how much more would you spend?

1a) For those who answered “more” to the above question, how would you pay for the additional military spending to ensure that it didn’t merely add to the nation’s already enormous debt? Please be specific. Would you eliminate non-defense domestic programs, or reduce entitlement benefits, or increase taxes?

1b) Why would you spend more? What is the United States unable to do right now to preserve its security because it isn’t spending enough? To what extent is insufficient military strength the critical factor explaining America’s inability to achieve satisfactory results with respect to an array of challenges, from destroying ISIS, to repairing failed states, to halting North Korea’s nuclear program? Do you believe that higher military spending would have deterred Russia from annexing Crimea in 2014? Would higher spending in 2008—which happened to be the highest since World War II—have stopped Russian aggression against Georgia? Or, at some point, is “more” meaningless?

2) In 1989, at the end of the Cold War, Pentagon spending totaled $291 billion, or $556 billion today when adjusted for inflation. The total number of active duty personnel at the time was 2.2 million. By contrast, Pentagon spending in 2015 totaled $578 billion, and the active duty force totals 1.4 million (All figures from the DoD Green Book, .pdf here). That means that, on average, the United States spends $416,000 per active-duty member of the military today, while we spent $252,000 in 1989—again, in inflation-adjusted (2016) dollars. What do you believe are the primary factors driving up the military’s costs, and what, if anything, would you do to address this cost growth?

3) The Army’s active duty end-strength is currently 475,000, down from a recent high of 566,000 in 2011 (See Green Book, Table 7-5, p. 259-60). Do you think we need a bigger Army than what we have today? Do we need more soldiers than we had during the height of the wars in Iraq and Afghanistan? If so, for what purpose? Would you engage in more armed nation-building missions like those in the Balkans in the late 1990s, or Iraq and Afghanistan after 9/11? Should the United States attempt to master counterinsurgency (COIN), or do you believe that the conditions for success are beyond the capacity of outside forces to control, and COIN diverts resources from more vital missions?

4) According to the Pentagon, the U.S. military is carrying about 20 percent excess overhead in the form of unnecessary or superfluous bases and facilities. Pentagon officials have repeatedly called on Congress to approve another round of base closures through the Base Realignment and Closure (BRAC) process, but Congress has so far refused. Would you call on Congress to authorize another BRAC? And would you use executive authority as President to close excess bases if Congress refused?

5) America’s NATO allies spent, on average, 1.3 percent of GDP, and, on a per capita basis $400 in 2014, as compared with the U.S. rate of 3.8 percent and $2,052, respectively. Some believe this to be a mark of the success of U.S. foreign policy. For example, the Wall Street Journal’s Bret Stephens contends that, “America is better served by a world of supposed freeloaders than by a world of foreign policy freelancers.” Do you agree? Is the fact that U.S. allies spend far less on their militaries than Americans do, and are disinclined to defend themselves and their interests, a sign that U.S. foreign policy is working? Would allied countries spending more on their militaries and being more assertive in addressing nearby threats to their security, before they become regional or global ones, signal a failure of American leadership?