Kaine Is a Solid Choice for Clinton, But What About the Left? 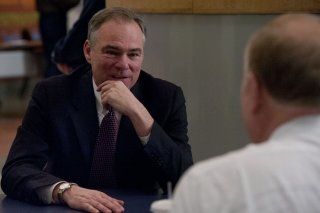 It’s official: Democratic presidential nominee Hillary Clinton has chosen “boring” Tim Kaine as her running-mate. But it just so happens that this boring junior senator from Virginia is a political winner. Sen. Kaine has never lost an election in his life, and he has been in the political arena for quite some time.

Kaine’s resume is about as long as an Ivy League-schooled intern in Washington who embellishes every single accomplishment or award that he or she won in college. But in the case of Kaine, the resume is genuine and bursting with experience on both sides of the executive-legislative divide.

First elected to the Richmond’s city council in 1994, he quickly rose up the ranks of Virginia politics over the next two decades. In just twenty-two years time, Kaine was a councilman, the Mayor of Richmond, the Lieutenant Governor of Virginia, the Governor of Virginia, and Senator of Virginia — a winning streak, mind you, that happened in a state that is historically Republican in ideology.

The political world is not shaking from Hillary’s VP announcement. You could see the appointment of Tim Kaine from miles away; he was frequently cited by Clinton allies inside and outside the campaign as a solid and reliable choice who could pick up the reigns and govern during a time of crisis. Hillary Clinton likes workhorses, not showhorses, and Kaine is definitely a workhorse — a bipartisan one at that. He is usually a participatory in some bipartisan grouping in the U.S. Senate hoping to get something pragmatic done. On immigration reform, he was a supporter of what the “Gang of Eight” was trying to do. And just a month ago, he partnered up with four Republicans, three Democrats, and one independent on a gun control measure that would make it more difficult for those on the No-Fly List to acquire firearms.

The progressive wing of the Democratic Party, however, will probably not like Secretary Clinton’s pick. Tim Kaine is no Bernie Sanders, Elizabeth Warren or Julian Castro. He doesn’t talk incessantly about the political system being rigged in favor of wealthy special interests; he was one of the earliest supporters of Hillary Clinton, coming out and pledging his loyalty a year before she even made her candidacy official; he’s a free trader and supported a bill that would provide the President of the United States with an easier time to pass trade agreements through the Senate; and despite being prochoice, he speaks of abortion uneasily due to his intense faith as a Roman Catholic. International trade is an especially hot-button issue for the left-wing Democratic base, and it’s a subject that Bernie Sanders harped on throughout his primary campaign. Groups like Democracy for America and the Progressive Change Campaign Committee were already scowling at any VP pick whose ideology wasn’t shared by the Bernie Sanders, Elizabeth Warrens, and Sherrod Browns of the world, so they probably weren’t jumping with joy when they heard that Clinton tapped Kaine as her running mate.

On foreign policy, Kaine is in Hillary Clinton’s orbit. He supports a more aggressive U.S. response to the humanitarian abomination that is occurring in Syria and he has consistently supported the U.S. military’s requests to keep more U.S. troops on the ground in Afghanistan for a longer period of time. Kaine is for a conditions-based withdrawal of U.S. troops rather than one that is kick started by an artificial date on the calendar.

On war powers, however, Kaine’s record as the loudest and most hardworking advocate for congressional authority during an armed conflict will give the left some amount of comfort. In virtually every committee hearing where Syria, Iraq, or the Islamic State is a topic of discussion, Sen. Kaine reminds his colleagues that Congress has been emasculated itself and repeatedly neglected to do its most basic but solemn duty under the constitution: authorize the use of military force against foreign enemies. AUMFs have been written and submitted by Sen. Kaine’s office ever since the bombing of ISIL began almost two years ago, but the Republican leadership under each instance decided not to pursue the issue. Kaine keeps trying to force his colleagues to have a debate — both for the integrity and power of Congress as an institution but also on behalf of the troops and pilots who are fighting and the American taxpayers who are funding the anti-ISIL campaign. He has failed on every single occasion, but certainly not for lack of effort.

The bottom line is this: Hillary Clinton wanted a vice-presidential nominee who has demonstrable leadership skills, political acumen, the national-security knowledge base that is so pivotal in this year’s election, and who can work with the opposing party to forge consensus on some difficult issues during her tenure. For Hillary, Sen. Tim Kaine checks all of those boxes.

Image: "Senator Tim Kaine (D-Va.) visits the Pentagon food court March 4, 2013 to speak to Department of Defense employees, and Virginia constituents about the effects sequestration will have on them. (DoD photo by Erin A. Kirk-Cuomo) (Released)."