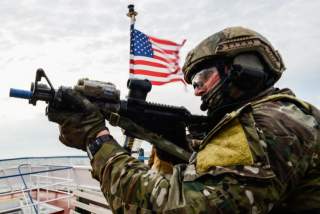 The DC foreign-policy establishment has a cure for what ails the Greater Middle East: more U.S. intervention. More (illegal) support for the Egyptian regime. An open-ended U.S. troop presence in Afghanistan. More advisers for the Iraqi government in Baghdad. More bombs and missiles for the Saudis. More air strikes and special ops troops to take on ISIS, perhaps with a full-scale ground offensive not far behind.

This interventionist impulse is not new. In his opening remarks before the “Advancing American Security” conference hosted earlier this week by the Charles Koch Institute, Andrew J. Bacevich produced a slightly tattered cover from the New York Times Magazine, dated March 28, 1999. A clenched fist, painted in the stars and stripes in vivid red, white, and blue accompanied the headline: “What the World Needs Now.” The subtitle “For globalism to work, America can’t be afraid to act like the almighty superpower that it is.” The article by Tom Friedman concludes “The global system cannot hold together without an activist and generous American foreign and defense policy.”

Bacevich and many of the fourteen other speakers (myself included) over the course of the day offered a different take. They pointed out that U.S. intervention—especially military intervention—was at least partly to blame for the chaos consuming the region. And they suggested—sometimes delicately, sometimes less so—that the use of even more force would offer few solutions. Oftentimes, it makes manageable problems worse—though the effects are mostly felt by peoples elsewhere, not by Americans here at home.

Former ambassador Chas Freeman noted that policymakers rarely ask the question “and then what?” when contemplating whether or not to use force. As we have seen in Iraq, Libya and elsewhere, military victories often merely reveal underlying political problems that the U.S. military cannot solve. The RAND Corporation’s Gian Gentile, drawing on his own experiences as a combat commander in Iraq, observed that the intricacies of nation-building—i.e. COIN—would not be easily be mastered, even by a military as skilled and adaptable as our own. And COIN is still likely to fail, given the myriad impediments that obstreperous partners and irreconcilable foes can put up before even a determined military’s path. The scale of the undertaking necessary to achieve success is rarely outweighed by the benefits. And then there are the opportunity costs: more than one speaker at the CKI conference pointed out that our attempts at nation building abroad had drawn needed resources away from nation building at home; even the out-of-towners had heard the stories about DC’s failing Metro.

But Bacevich was particularly well-placed to start the conversation about the broad contours of U.S. foreign policy. His latest book, a military history of America’s adventures in the Greater Middle East, is filled with reminders of the limits of military force.

As he surveys the seemingly endless series of campaigns and minor interventions, all the way up to full-scale land wars, such as the liberation of Kuwait in 1991, and the invasion of Iraq in 2003, the one idea that emerges repeatedly is that U.S. military operations were often ineffective, and sometimes pointless. Even apparently clear-cut military victories have failed to produce equally decisive strategic gains for the United States.

For example, Reagan’s assault on Muammar Qaddafi, operation El Dorado Canyon, “had a transitory impact at best.” Clinton’s Operation Determined Force, a bombing campaign to degrade Serb forces, and halt attacks on Bosnian civilians, “offered much to admire,” in terms of planning and execution. “As a practical matter, however, it was largely superfluous.” Similarly, Operation Infinite Reach, the cruise missile strikes on suspected al Qaeda facilities in Afghanistan and Sudan in August 1998, were “a well-executed but largely pointless expenditure of high-tech weaponry.”

But the most egregious instance in which U.S. government officials failed to accurately assess the effectiveness of military operations, a failure that has misinformed U.S. foreign policy in the Greater Middle East ever since, occurred after Operation Enduring Freedom drove al Qaeda leaders out of Afghanistan, and their Taliban hosts out of power there.

A number of Bush administration officials, cheered on by hawkish pundits, believed that “Enduring Freedom had demolished any need for the United States to constrain the use of force.” For Charles Krauthammer, “Afghanistan demonstrated that America has both the power and the will to fight, and that when it does, it prevails.”

Bacevich offers a crucial corrective, and compels us to question anew the purpose of military power in the first place. CENTCOM Gen. Tommy Franks and others, he explains, “confused partial operational success with permanent mission accomplishment.” U.S. forces had managed to outdo the Soviets, unleashing “upon Afghans the forces of anarchy” while remaining “oblivious to what the restoration of order was now likely to require.”

But American officials, and the senior military officers who advise them, have failed to appreciate such facts. They retain their faith in the military’s “ability to mete out punishment with micrometer-like precision.” Others cling fast to even more grandiose objectives, believing that the United States should “shape the world in conformance with our interests and our principles.”

We can’t be certain that an alternative approach would have achieved even less satisfactory results, but our uneven track record in the Greater Middle East should, at a minimum, force us to reconsider some of the enduring truths unquestioned assumptions that have guided U.S. foreign policy for decades. A greater appreciation for the limits of military power should restrain our willingness to use it.

So too should our favorable geostrategic position. As the world's largest economy protected physically by wide oceans to the east and west, and peaceful and friendly neighbors to the north and south, we do not need to wage war frequently in order to be safe, prosperous and reasonably free. Our willingness to do so, especially since the end of the Cold War, has often had the opposite effect.

But we will not arrive at these conclusions if we fail to reflect seriously upon our foreign-policy aims, and the actual results. The case for restraint in U.S. foreign policy is strong, but someone still has to make it, and they need venues for doing so.